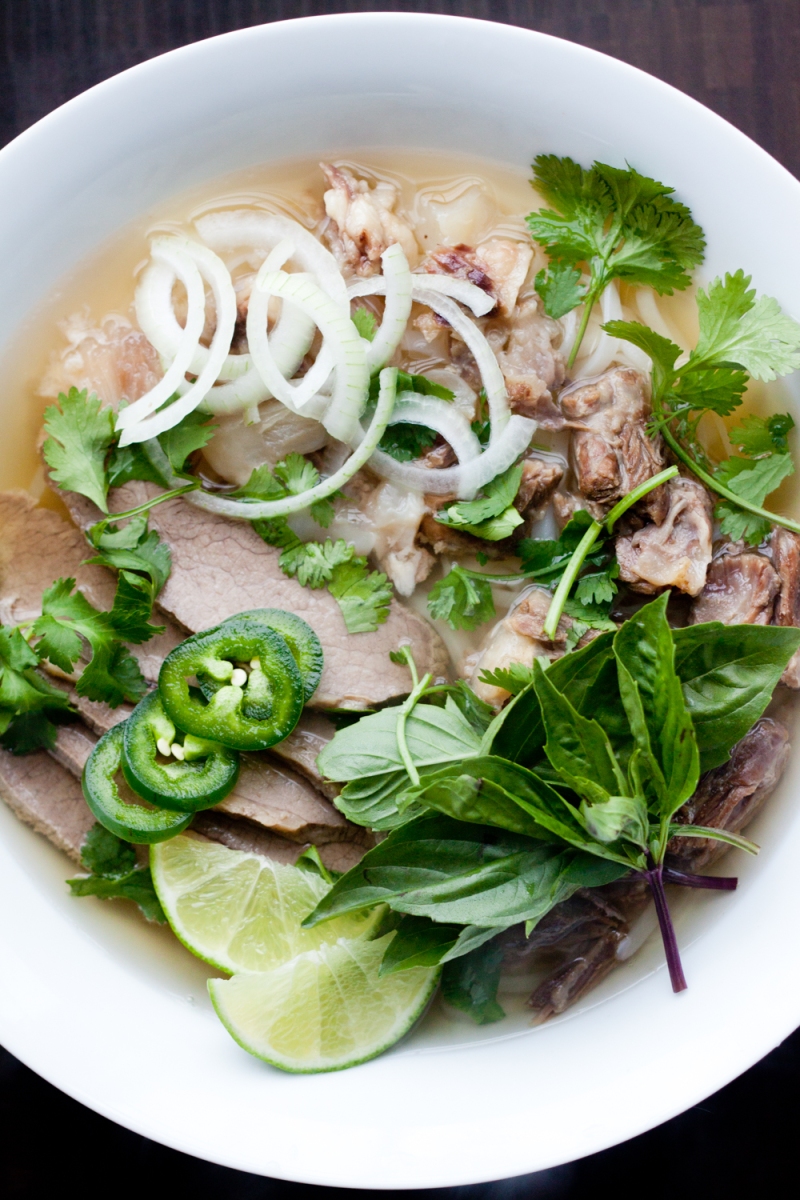 Pho, often considered the national dish of Vietnam, is a rice noodle dish that uses a beef bone broth. It’s hard to describe the basic, yet complex taste that comes from this unique mix of broth, beef, spices and herbs – I recommend just going to your local pho joint and trying it for yourself. You’ll be hooked. I had my first bowl right after moving to Hawaii in 2001, and ever since then I’ve been slightly obsessed with figuring it how to make it at home. After several dozen ho-hum attempts I finally settled on this, which I consider my definitive, recipe.

This dish emerged from Hanoi in the early 20th century, and was brought to the US in the 1970s by refugees after the fall of Saigon. The inclusion of beef in the dish is reflective of its French influence; prior to French colonialism, cows in Vietnam were mainly used for labor and not as a food source. I’ve read a few different histories of the word “phở” itself, and my favorite is that it came from the French word “feu” (fire), and that pho itself is Vietnam’s take on the popular French beef stew, pot au feu.

Concerning the meat, what’s important for this dish is a couple pounds of meaty bones and a couple pounds of brisket or flank steak. There’s a little bit of wiggle room here, and there are varying opinions on what tastes best. In my opinion, oxtails are the only absolutely necessary part of getting that perfect broth. For this particular recipe I used brisket, oxtail, and knuckle bone from US Wellness Meats, and it was definitely a winning combo. Marrow bones or beef shanks would also be great choices.

The parsnip may seem out of place, but it’s the perfect way to bring a little sweetness to the dish without using the more common method – rock sugar or sweetened fish sauce (nước chấm). Lastly, while you could make your own spice blend using whole star anise, cloves, cinnamon sticks, fennel, coriander, and green and black cardamom pods. I prefer to use these easy and convenient pho tea bags so I don’t have to tie together all of my spices (I’ve also seen DIY “spice packs” complete with their own tea bags).

Put the bones in a pot and fill it with cold water. Bring it to a rolling boil and let it continue to boil for about 10 minutes. It will foam up a lot, that’s fine.

After ten minutes, drain and rinse the pot and bones. This step removes the impurities from the bones and results in a clearer broth. Return the bones to the pot and refill it with cold water again. Bring it to a boil and reduce heat to low, and let it simmer for one hour; skim any fat or foam that accumulates on the top.

As the bones simmer, let’s get the rest of the ingredients ready. First, char your onion (remove the outer skin and cut off its ends) and ginger on the grill for about five minutes per side, or broil in the oven for about 8 minutes.

After the bones have been simmering for an hour, add the seasoning/tea bag, fish sauce, brisket, parsnip, onion, and ginger. Once it starts simmering again, start your timer for another hour.

After the hour is up, remove and discard the onion, ginger, parsnip, and seasoning/tea bag. Remove the brisket and put it in cold water for 10 minutes. This step prevents the meat from turning dark brown and drying out. After 10 minutes, place the brisket on a plate and cover it with plastic wrap and put it in the fridge for later.

Meanwhile, let the bones continue to simmer for an additional three hours, skimming the fat off the top as needed.

30 minutes before your three-hour simmer is done, soak the rice noodles in cold water for a half hour. This is also a good time to pull your brisket out of the fridge and slice thinly.

You can also get your garnishes chopped and ready to go, too.

After the noodles have soaked for 30 minutes, bring another pot of water to boil and blanch the noodles for about 15 seconds, until softened (but not mushy). Strain and rinse with a little cold water, and place the noodles in each bowl.

Strain the bones in a colander lined with a cheese cloth that’s on top of another pot (I used the pot I had just blanched the noodles with). Put the pot with the strained broth back onto the stove, and bring to a boil on med/high heat. Meanwhile, pull all of the meat and cartilage from the bones, which should fall off the bone at this point.

Arrange the meat on top of the noodles so that you impress your date with your meat-arranging skills.

Ladle your now-boiling broth on top of your noodles and meat, and serve with the garnishes.

That’s it! Squirt some hoisin or sriracha sauce on top and go to town.

If you have any leftover broth, be sure to save it (I freeze mine) for a quick meal idea in the future.