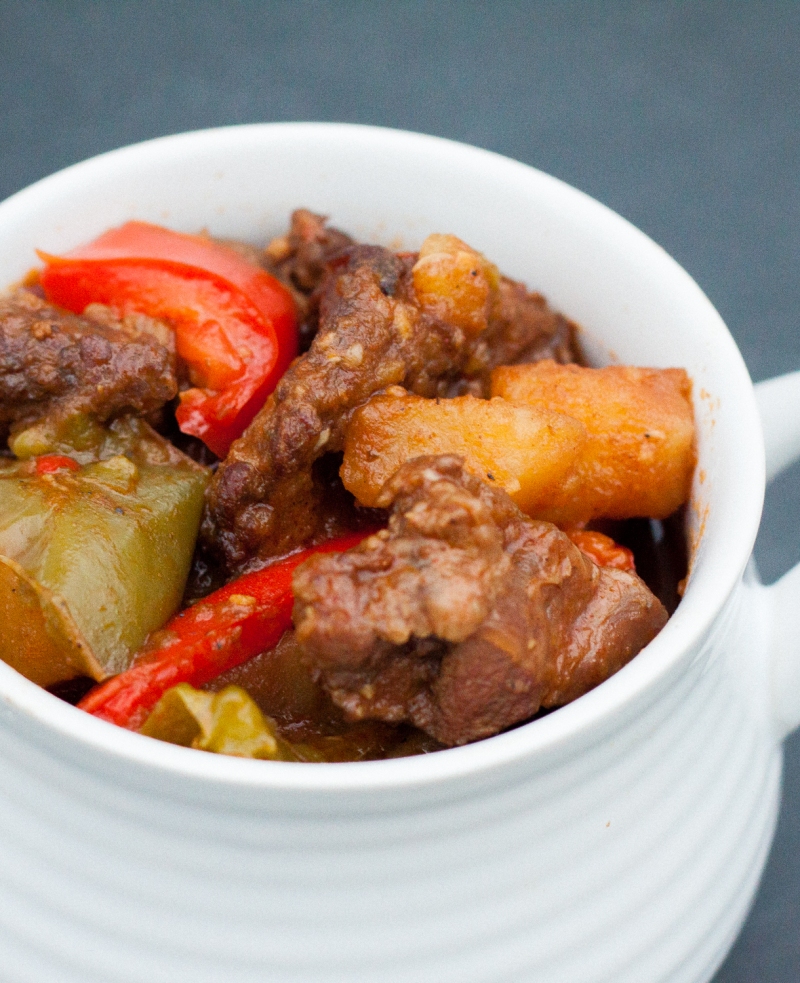 Goulash has a fairly long history, as it is traced back to 9th century Hungarian shepherds (the term gulyás translates to “herdsmen”), when soup was an important part of the lifestyle. People would dry meats and veggies and then add hot water later to create a soup, and goulash was born. Although paprika is a signature spice of both Hungarian cuisine and this dish, it wasn’t introduced until the 16th century (bell peppers came from the New World), so the original variations of this dish were paprika-less.

Goulash is often classified as a stew here in the United States, but many Hungarians maintain that it’s a soup, often to differentiate it from a similar, thicker dish called pörkölt. Goulash is often served over egg noodles or spätzle, but many variations use potatoes, including mine. They help to bring a hearty feel to the dish, plus they conveniently thicken the sauce at the same time.

You might be wondering why the recipe calls for two halves of peppers. It’s for color; if you would like to be economical and only buy one color of pepper, I won’t hold it against you.

Cut up your chuck roast, leaving a little fat on it if you’d like. Sprinkle with salt and pepper.

Add the blended onion to the dutch oven and sauté until softened and slightly translucent, about five minutes. It will probably start drying up, which is fine. This is a good time to preheat your oven to 325 degrees.

Add the garlic and sauté for another minute.

Add the tomato paste and paprika, and sauté for another minute.

Next, add the broths, bay leaf, marjoram and caraway seeds, and stir together until uniform in appearance. Bring to a simmer then add the meat (and its juices), cover, and put in the oven.

Bake for one hour and ten minutes. During this time you can prep your potatoes and peppers.

Stir in the peppers and potatoes, re-cover the dutch oven and bake for another 30 minutes.

That’s it! Let the soup rest for a few minutes before serving, so the potatoes will thicken the soup into borderline “stew” territory. Some people like to stir in a bit of sour cream at the end, and I think that’s a fine idea if you’re up for it, but not totally necessary.