I don’t know about you guys, but my teenage years were not very productive. I played and sang in punk rock bands, and we churned out a cassette tape release every six months or so. That was about it. At the time I felt like a pretty prolific chap, but it pales in comparison to the milestones that teen blogger Joshua Weissman (the writer behind the website Slim Palate and the newly-released cookbook, The Slim Palate Paleo Cookbook) has reached in the past couple of years.

Writing a cookbook is not easy. Surviving your teenage years is not easy. Somehow, Joshua managed both, and while I can’t speak for how easily his adolescence is going, this book is a significant accomplishment in and of itself. But this book is even more impressive; it is the tale of one young man’s journey from obesity to health (he lost 100 pounds along the way). Ultimately, this project is more than a cookbook – it’s an early chronicle of someone destined for great(er) things. 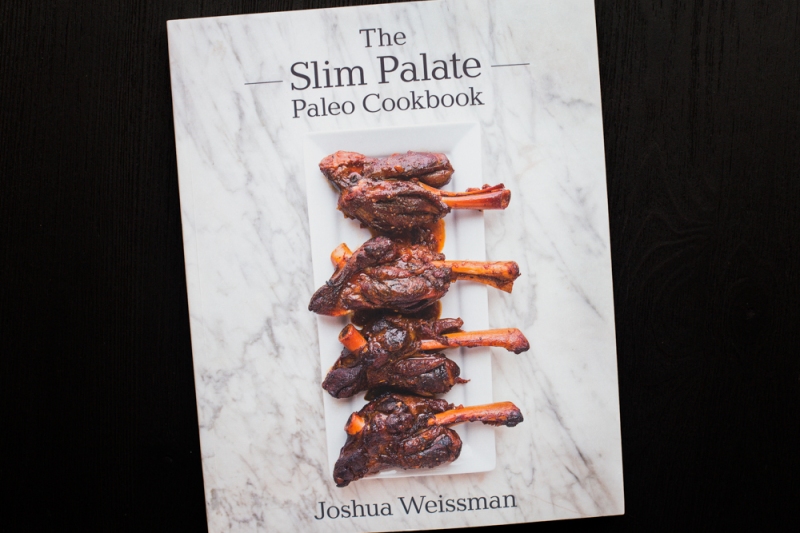 The Slim Palate Paleo Cookbook is divided into eight sections: breakfast, poultry, meat, seafood, soups/stews, vegetables, desserts/sweets, and sauces/dressings/dips. Meats, vegetables, and seafood make up the majority of this book. Recipes range from dead simple (Prosciutto Egg Cups) to fairly involved (Herbed Pork Loin) but I don’t think any of the recipes are difficult enough to scare away any semi-confident home chef. The recipes do not include a cooking time up front so I would read through them in their entirety before deciding what to tackle – luckily, each recipe is well-crafted, concise, and approachable, so it shouldn’t be an issue.

Like many books currently entering the Paleo scene, The Slim Palate Paleo Cookbook is testing the limits of what constitutes “Paleo”, siding with the camp that believes individuals should make their own minds up about what to eat and what to avoid. In his cookbook, Joshua embraces some forms of dairy (butter, ghee, cream, yogurt) to delicious effect, with substitutions for non-dairy products when appropriate.

The book is gorgeous – peppered with stunning photography across a simple, clean layout. It’s very impressive and encourages you to flip through and earmark many of the recipes. A few of the recipes don’t have a picture (mostly for sauces) but I didn’t find it to be a problem.

One thing that drew me to Joshua’s book was that our cookbooks are similar in several ways, mostly in regards to presentation, photography, and recipes. One recipe in particular stood out to me – his Texas Chili – since I have a similar recipe (Chili Con Carne) in my book. Whereas my recipe uses a variety of seasonings and ground beef as a base, Joshua’s recipe uses reconstituted dried chiles and chunks of short ribs and chuck roast to similar effect. So I decided to cook his chili and take pictures to compare it to my own chili. I’m happy to say that his version is delicious, evenly-flavored, and mild enough for eaters of all ages. It’s fascinating to see two very different dishes share the same name, and I’m happy to put Joshua’s stunning book on my mainstay cookbook shelf – those reserved for the cookbooks that I refer to often.

To celebrate the release of The Slim Palate Cookbook, I’m giving away a copy of it! To enter the giveaway, click here to enter via Rafflecopter. The giveaway ends midnight (EST), March 22nd 2014, and I will pick a winner on March 23rd. Giveaway limited to US residents. Good luck!

Update: Congratulations to Allison M. of Denver, who won the giveaway!

25 thoughts on “A Tale of Two Chilis: My Review of The Slim Palate Paleo Cookbook (and a Giveaway)”