Pho is one of my favorite dishes of all time. It was one of my first meals when I moved to Hawaii nearly 15 years ago, and I’ve eaten it regularly ever since. To this day, if I’m feeling under the weather, I immediately reach for the nearest pho bowl that’s lying around (if only it was that easy).

I spent years working on a good recipe of my own, which I wrote in 2012 (confidently declaring it my “definitive recipe” – ha!). I then updated and improved upon the recipe for my cookbook. I love my cookbook recipe, and I would confidently put it toe-to-toe with your favorite bowl of soup. Unfortunately, it takes over 7 hours to make it from start to finish, since I make the broth from scratch. While spending a whole day making one soup is very satisfying (and slightly therapeutic), I wanted to put together a faster version with similar flavors, which I’m proud to debut today.

This dish first emerged as a Hanoi street food during the late 1800s, and was brought to the US in the 1970s by refugees after the fall of Saigon. The inclusion of beef in the dish is reflective of its French influence; prior to French colonialism, cows in Vietnam were mainly used for labor and not as a food source.

Be sure to scroll through to below the recipe text, because I also recorded a video of the recipe. Thanks to everyone for your feedback on my last video; I adjusted my side camera angle so that you can better see what’s in the pots, but since this recipe is basically just a lot of boiling, it’s not very exciting footage!

For this recipe I used the US Wellness Meats eye of round, oxtails, and marrow bones, all sourced from grass-fed cows. I pressure-cooked the oxtail and marrow bones to make broth; I then picked the meat off the oxtails and added it to the soup with some thinly-sliced eye of round. US Wellness Meats is currently offering 15% off all orders under 40lbs using the code “soda”, and the deal expires at midnight CST tonight (December 9th), so jump on it! Okay, on to the recipe.

1. Soak the noodles in a large pot of warm water for 30 minutes. Char the onion and ginger either over a grill or using the broiler setting of your oven, about 5 minutes, then set aside.

2. As the noodles soak, prepare the broth. In a large pot, bring the broth and water to a simmer. In a small pan, toast the star anise, cardamom pods, peppercorns, cloves, fennel seeds, and coriander seeds over medium heat until aromatic, about 4 minutes, then transfer to a tea ball or tea bag (or wrap in cheesecloth). Add the tea ball, cinnamon sticks, parsnip, onion, and ginger to the broth and continue to simmer for 25 minutes.

3. Bring a separate pot of water to boil then add the soaked noodles. Simmer until soft, about 30 seconds, then remove with tongs and distribute directly into four large soup bowls. Garnish each bowl with the meat, cilantro, and sliced onions, then set aside as we finish the broth.

4. Add the fish sauce then taste the broth, adding salt until it tastes perfect. Remove and discard the tea ball, cinnamon sticks, parsnip, onion, and ginger. Ladle the soup into the bowls and serve with the garnishes.

** If you don’t have every single ingredient for the broth (anise, cardamom, etc), don’t worry about it. I listed everything but getting 75% of the way there is good enough; I would say that the star anise, cloves, and cinnamon are the most essential out of the group. You’ll see in the video below that I didn’t have coriander or fennel seeds, and it still came out great. You could also use one of these handy pho tea bags to further streamline the process.

** Freeze the eye of round for 20 minutes to make it easier to slice.

** Feel free to simmer the broth for longer if you have the time. It tastes great after 30 minutes but even better after an hour.

** Be sure to save any leftover broth, for even faster pho next time.

I’m trying hard to keep my videos under 5 minutes, but I had a lot to explain for this recipe so I ran a little long. Enjoy watching me in a rare Chatty Cathy mood. 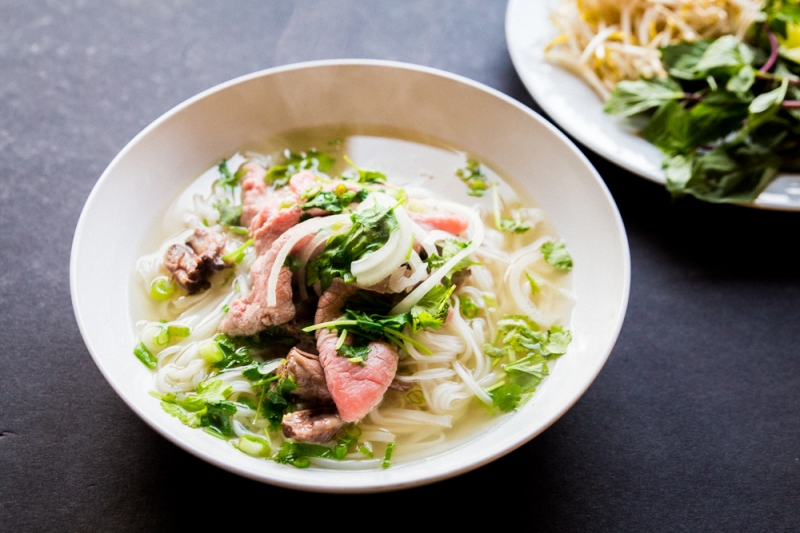