Friendly reminder that the Kindle version of my debut cookbook, The Ancestral Table, is available for $2.99 on Amazon for today (Nov 24th) only!

Jambalaya has its origins in European cuisine, and it is commonly believed that the dish is the result of Spaniards living in New Orleans attempting to recreate Paella using local ingredients. The word Jambalaya itself comes from the Provençal (Southern France) word Jambalaia, which means “mish-mash”. Some folktales posit that the word is a combination of Jamón (“ham”) and Paella, but that falls a bit flat when you consider that ham is not a traditional ingredient in Jambalaya.

But what are traditional ingredients, you might ask? Good question. First, there are two major types of Jambalaya – Creole (or “Red”) and Cajun. The main difference between the two is that Creole Jambalaya, the more popular version of the two, contains tomatoes (the Cajun version has more rural roots, where tomatoes weren’t readily available).

Aside from the standard “holy trinity” mirepoix of onion, celery, and bell pepper, there are plenty of proteins used in this dish: shrimp, sausage, alligator, chicken, crawfish, oysters, and nutria rat. For this recipe I used the most readily-available proteins: sausage, shrimp, and chicken; if you have access to some of the more adventurous ingredients from this list, go for it.

2. Once the chicken is browned, remove it with a slotted spoon and set aside. Add the onion, bell pepper, and celery; sauté until softened, about 4 minutes, then add the garlic. Sauté until the garlic is aromatic, about 30 seconds, then add the tomatoes, bay leaves, stock, rice, chicken, and sausage. Bring to a simmer, then cover and reduce heat to low; simmer until the rice has absorbed almost all of the liquid, about 20 minutes.

3. Once most of the liquid has been absorbed, taste the Jambalaya for salt, pepper, and heat, seasoning as needed; once it tastes perfect, stir in the shrimp, cover, remove from heat and let set for 10 minutes. Once ready, stir in some chopped parsley then serve with sliced green onion.

** When buying long-grain white rice, it’s important to know where it was grown. Most long-grain rice in the US is grown in Louisiana, Texas, and Arkansas, on former cotton fields that used arsenic-based pesticides to combat boll weevils. This arsenic is still present in the fields, and rice absorbs a lot of it during cultivation. I prefer to use Lundberg brand rice, which is grown in California, as it has significantly less arsenic.

** You have many options for hot sauce. Tabasco original sauce is always a good choice, and their chipotle sauce adds a nice smokiness to the dish. Other favorites include Crystal and Louisiana hot sauces.

** This dish tastes better the following day. I should know, I ate it eight times in the four days following my initial test batch. 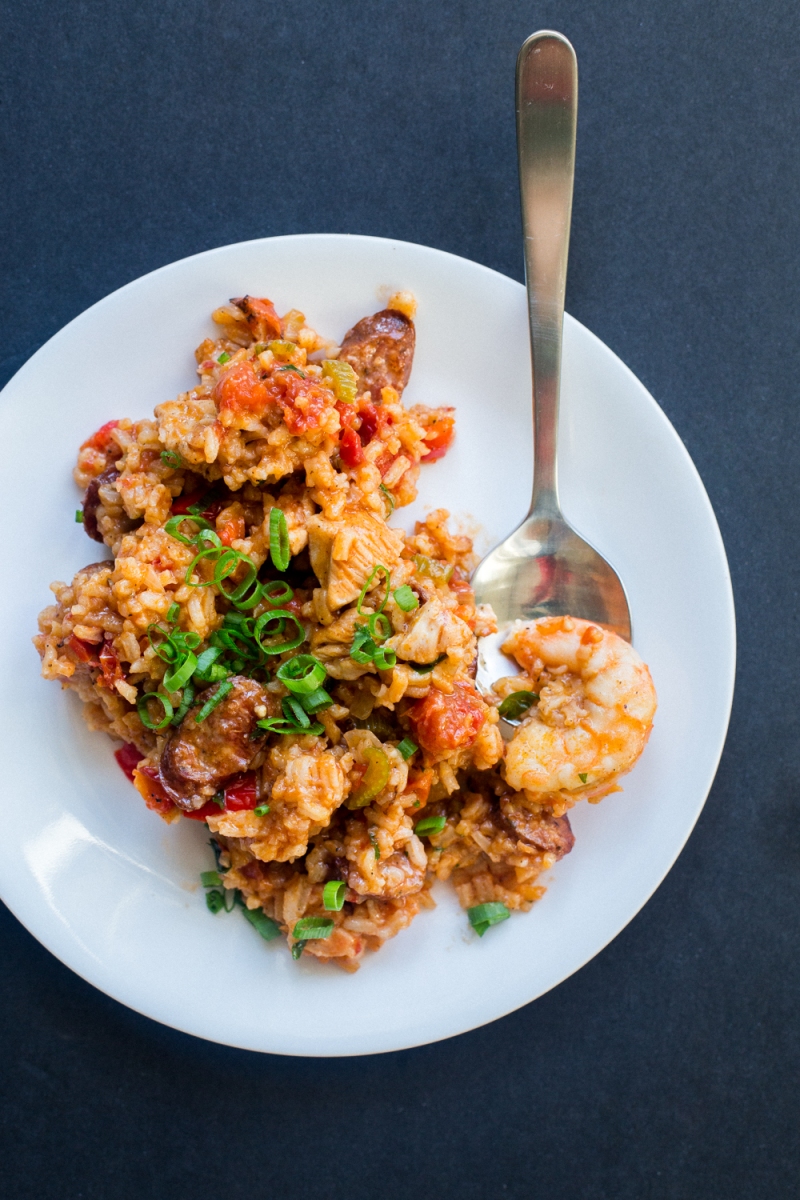