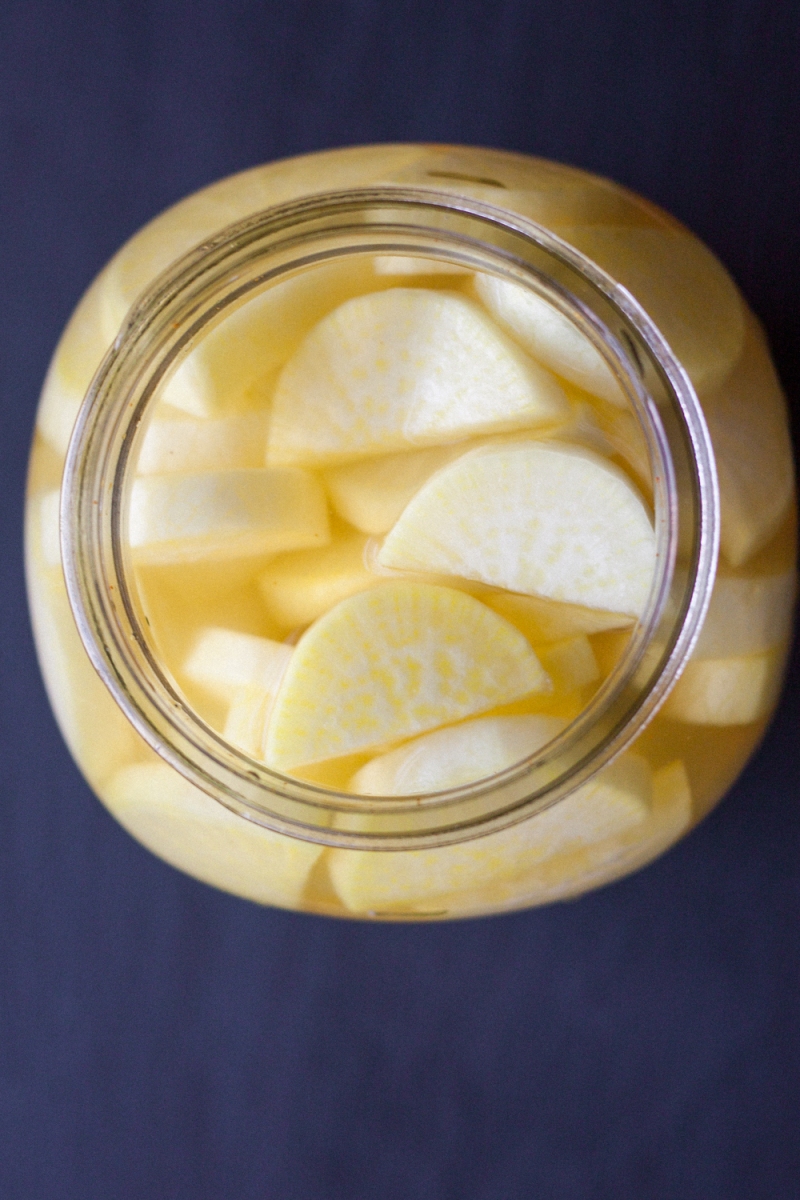 Takuan is a Japanese dish of fermented daikon radish. It is a form of Tsukemono (Japanese pickled veggies), which are served as side dishes or snacks, and are even part of the Japanese tea ceremony. Takuan in particular is often served at the end of meal to help digestion. The name “Takuan” is often attributed to Takuan Soho, a 17th century Zen Buddhist figure and the creative basis for the character Dakuan from the anime film Ninja Scroll. Korean cuisine has a similar pickled daikon radish dish, called Danmuji (단무지).

The daikon radish itself made its way to Japan from China about 2,000 years ago. Today, more land in Japan is used to grow daikon than any other vegetable. Takuan sold in many stores today is dyed yellow with food coloring; I was able to get a similar color by using a tiny bit of turmeric while pickling the radishes.

END_OF_DOCUMENT_TOKEN_TO_BE_REPLACED

Japanese curry is a relative new dish to the country – it was introduced by the British in the 19th century, who in turn picked it up from India. Today, curry houses are everywhere in Japan, and for good reason; the irresistible sauce is mild and slightly sweet compared to other curries found worldwide, and is often served with any combination of stewed or fried meats which keep this dish surprisingly versatile.

I remember the first time I went to a local Asian grocery store shortly after deciding to go mostly-grain-free last year, and my utter disappointment when looking at the ingredients list of those handy Japanese curry blocks. You see, one of the pivotal ingredients in all of those blocks is wheat – which makes sense given the thick and creamy consistency that’s unique to Japanese curry. But fear not, dear reader, because I’ve been working on a gluten-free Japanese curry for the past year and I think I’ve got it figured out.

END_OF_DOCUMENT_TOKEN_TO_BE_REPLACED

As I mentioned in an earlier post, summer is a difficult time to write new recipes. We’ve spent a lot of this summer traveling or entertaining guests; when we are home, I usually prefer to grill something, and most of my grilling recipes are already on this site.

However, this has also been a good time for me to try out healthier versions of pre-Paleo dishes, like teriyaki chicken. I grew up in Washington state, where you’ll find an abundance of Asian restaurants selling “teriyaki chicken” – likely influenced by traditional Japanese teriyaki sauce, which is made with soy sauce, cooking wine, and sugar or honey. Hawaii has a similar dish, simply called “BBQ chicken”. Traditionally, the sauce is boiled down and thickened before marinating the meat, but it’s often too long of a prep to cap onto an already long marinating process (2-4 hours). Here’s how I make it at home.

END_OF_DOCUMENT_TOKEN_TO_BE_REPLACED

This is an update to a recipe I posted earlier, but with dashi (broth) made from scratch in order to reduce our MSG intake.

This dish has become our go-to easy lunch on the weekends, when we’re running around the house doing chores. Most of the “cooking” involves letting things soak or simmer, so with some agile timer-setting you can make this dish with minimal effort.