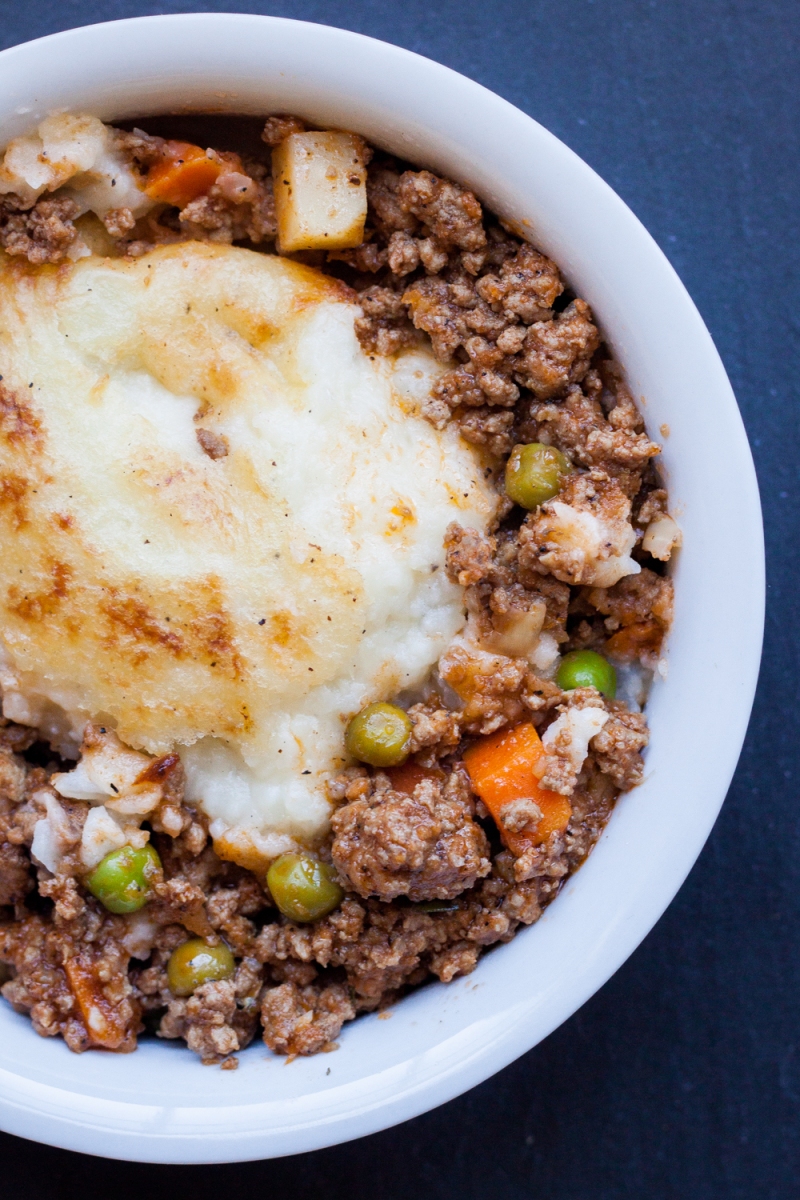 Although meat pies have been eaten in the British Isles since the Middle Ages (14th Century, last I heard), Shepherd’s Pie as we know it today coincided with the arrival of the potato in Europe. The Spanish brought potatoes to Europe in 1520, but they didn’t catch on until the 18th Century in Great Britain. Shepherd’s Pie appeared shortly thereafter – although under its original name, Cottage Pie, and made mostly with beef. The term Shepherd’s Pie followed about a hundred years later, along with the idea that it should be made with mutton. Today, Shepherd’s Pie can be made with beef or lamb, or sometimes both, while Cottage Pie usually refers only to the beef version of the dish.

Another interesting thing about this dish is the fact that it’s prevalent in many other cultures, with some pretty amusing names, like Pâté Chinois (“Chinese Pie”, French Canada), Картофельная Запеканка (“Potato Baked Pudding”, Russia), and Escondidinho (“Hidden”, Brazil).

END_OF_DOCUMENT_TOKEN_TO_BE_REPLACED 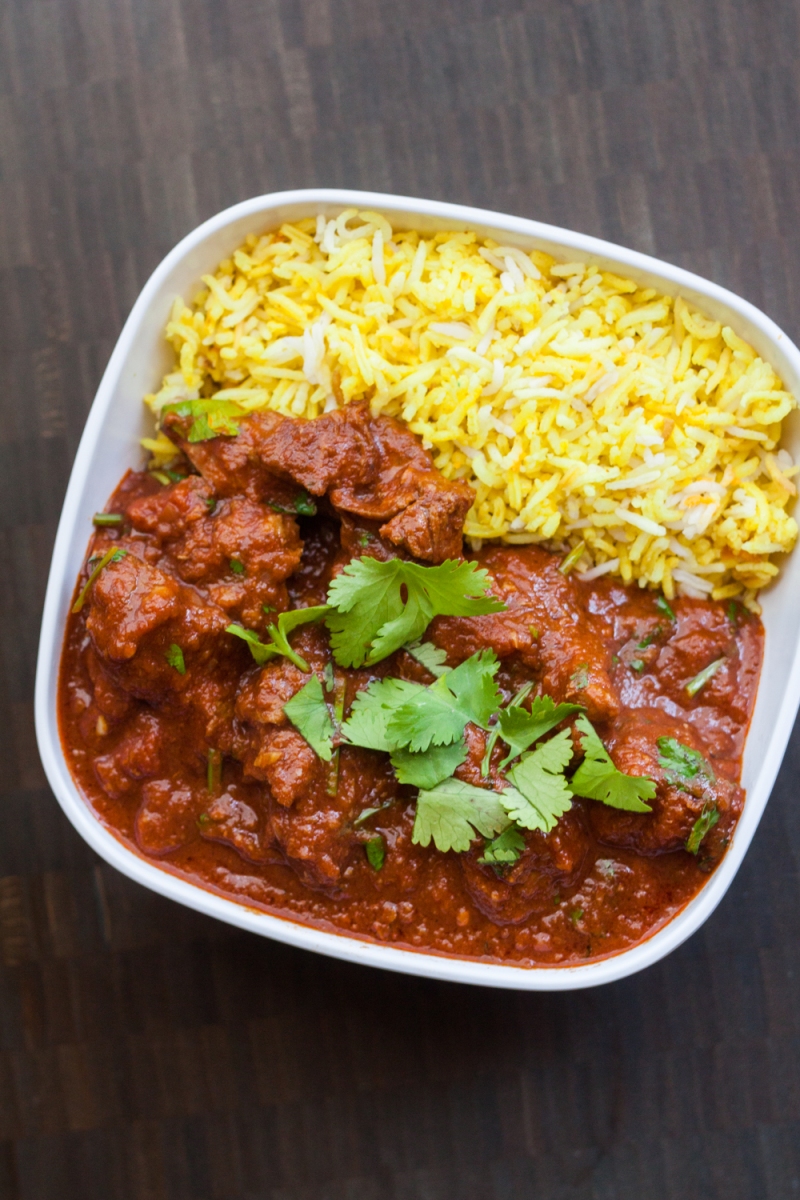 Rogan Josh is a popular Kashmiri dish that is believed to have originated in Persia before making its way to Northern India and beyond (in Persian, “rogan” means clarified butter and “josh” means hot or passionate). Its signature red color is historically the result of mild red Kashmiri chiles which were used in making this dish. Over the years, many restaurants started using tomatoes in the dish to bring about that red color easily. My recipe follows the more modern interpretation of the dish, mostly because you and I don’t have the money to travel to Kashmir for some chiles! Well, maybe you do, but I most certainly do not.

An excellent cut of lamb for this dish was the other half of Lava Lake Lamb’s beautiful lamb shoulder (the other half was used to make shashlik). This slightly-fatty cut imparted a ton of flavor into the dish, which just tasted better and better the longer it simmered.

END_OF_DOCUMENT_TOKEN_TO_BE_REPLACED 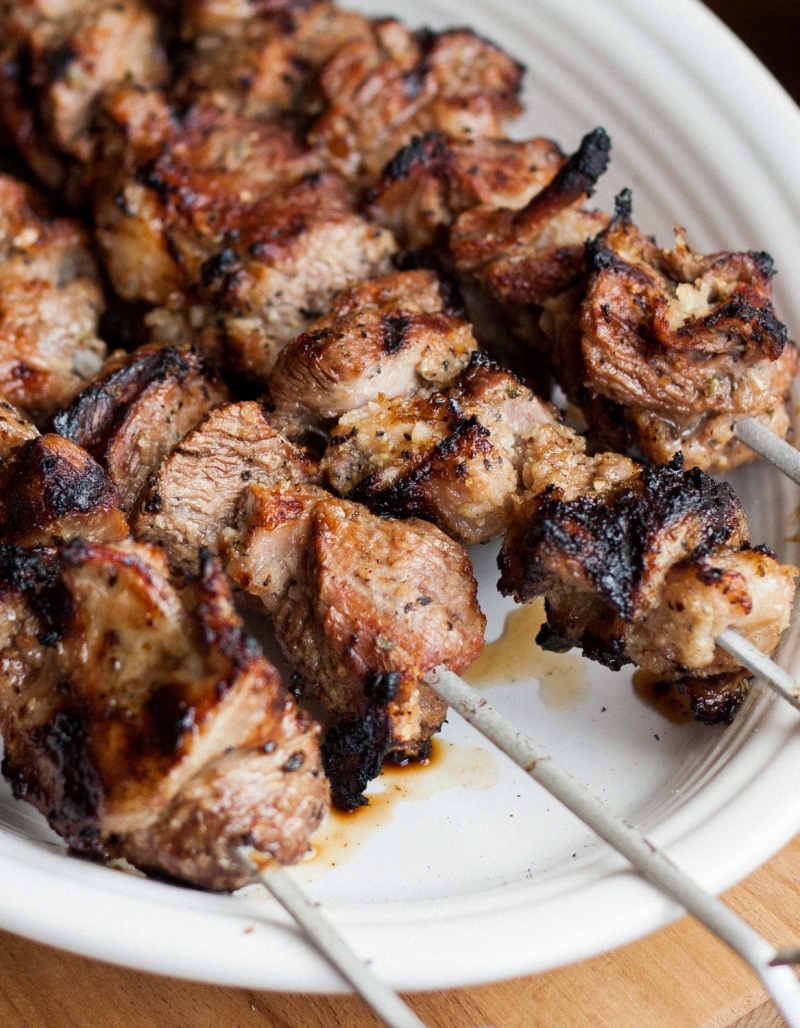 Shashlik (Шашлык) is a type of shish kebab commonly found in Russia and the former Soviet republics. It was likely brought to Moscow from Central Asia in the 19th century. Today, it’s a popular summer food cooked over an open fire at social gatherings. It’s traditionally prepared with lamb, but chicken, pork, and beef variations are becoming increasingly prominent. With summer in full swing throughout the country right now, I thought it would be a great time to share this tasty dish!

There are a few tricks that I came up with when developing this recipe that I think are pretty sweet. While the dish is traditionally marinated in either vinegar or lemon juice, I found that the combination of lemon juice and apple cider vinegar gives the meat a tangy and subtly sweet flavor. Secondly, leaving the salt out of the marinade and saving it for the last stage of the recipe provides for a really great complementary texture to the tender and juicy meat.

END_OF_DOCUMENT_TOKEN_TO_BE_REPLACED 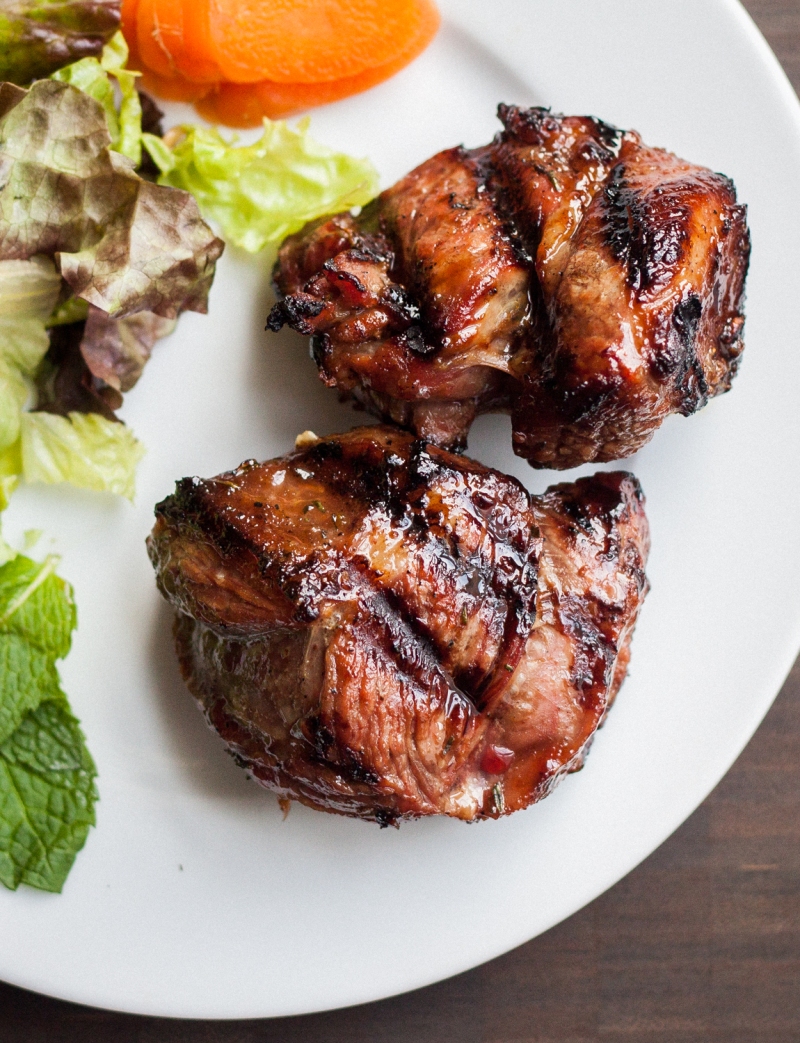 There’s an old saying: lamb is a meat best grilled. Okay, that may not be an old saying, but it should be. Something about lamb and direct heat go together really, really well. So when Lava Lake Lamb sent me some of their lamb sirloin for a recipe, I knew it was going directly on the grill.

This recipe uses a simple marinade that combines maple syrup and spicy brown mustard to complement the lamb’s natural deliciousness.

END_OF_DOCUMENT_TOKEN_TO_BE_REPLACED

Bangers and mash is a traditional English dish and the quintessential “pub food”; it can be made for large groups of people at once with relative ease. This isn’t your standard bangers and mash dish since it’s typically served with beef or pork sausage and mashed potatoes, and I’m being crazy and using lamb sausage and colcannon. Regardless, this dish still has the same desired effect: it’s a hearty, savory dish that really hits the spot on a rainy day.

A perfect sausage for this dish was Lava Lake Lamb’s Rosemary and Garlic Sausage, which had a rich sausage flavor but was only slightly “lamby” in taste – in the end it was an excellent pairing of this savory sausage and the mild, buttery colcannon.

END_OF_DOCUMENT_TOKEN_TO_BE_REPLACED 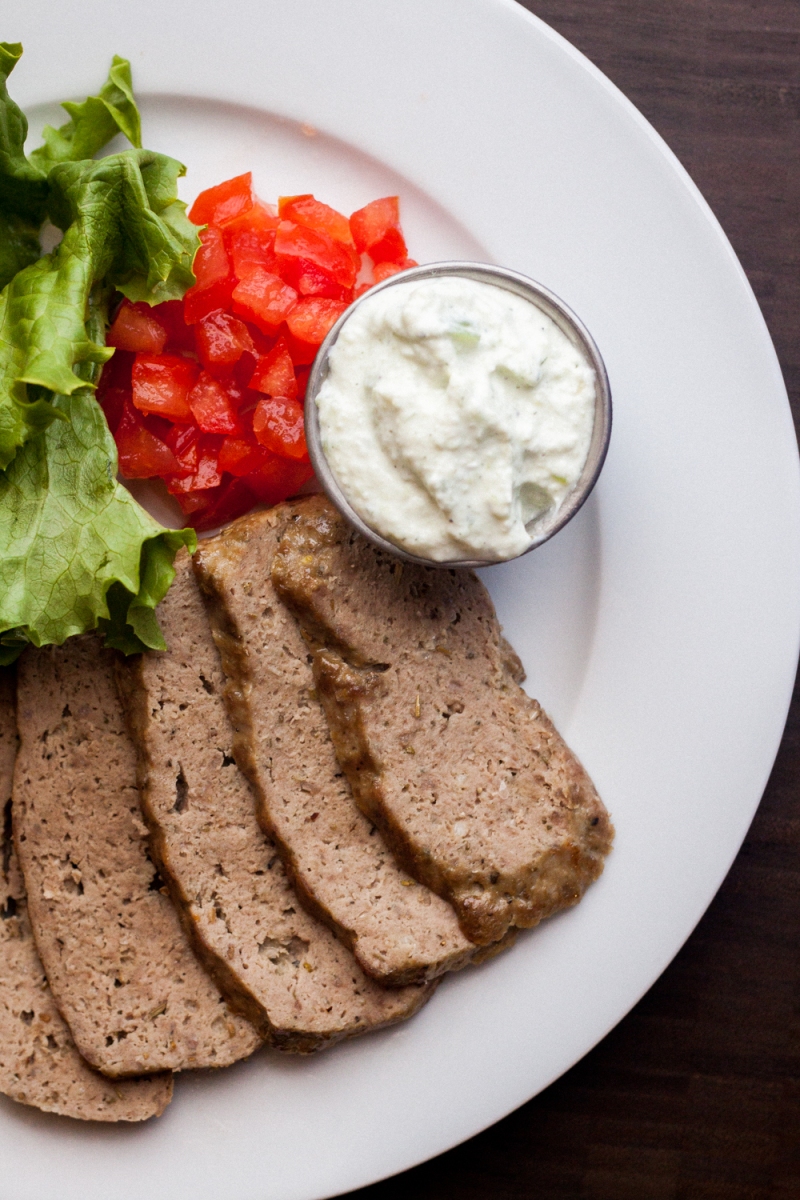 Gyro meat, often referred to as doner or shawarma meat, is simply meat roasted on a rotating vertical spit and shaved off. Most Mediterranean and Middle-Eastern countries have some variation of this dish as a common street food. Depending on where you’re getting it, the meat can be made of lamb, beef, goat, chicken or a combination of meats. It’s one of my favorite meats of all time, and one that’s not easily replicated at home without a rotisserie setup. Lava Lake Lamb was gracious enough to send me some ground lamb recently, so I thought it was time to try and figure out how to make it on my own.

I spent a lot of time researching how to make authentic gyro meat at home, and in the end I found that Alton Brown’s approach was just about perfect. It involves processing the meat to make a thick paste, which is then stored for a couple hours before being cooked on the grill using a rotisserie or in the oven using a meatloaf pan. I went with the meatloaf pan variation with just a few adjustments, and it was awesome.

END_OF_DOCUMENT_TOKEN_TO_BE_REPLACED 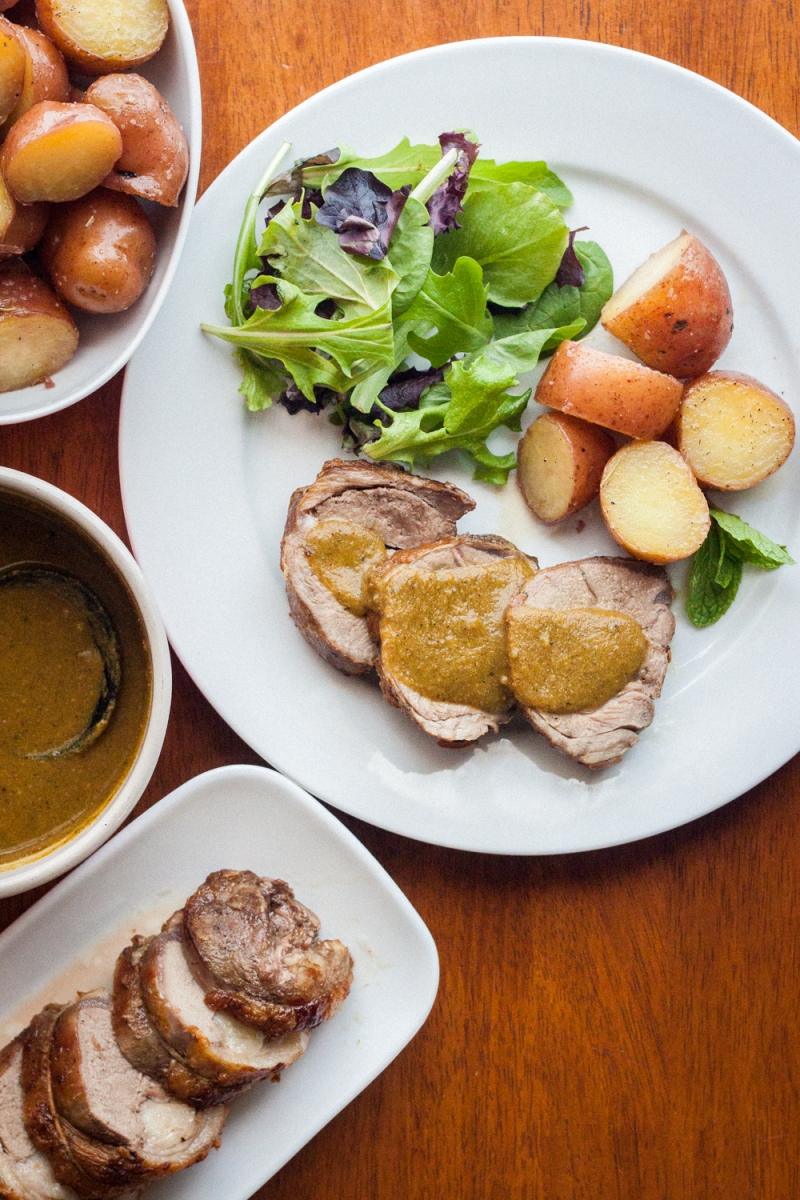 Lamb is a delicate but rewarding meat; while a lot can go wrong when cooking it, when you get it right it’s an unforgettable experience. US Wellness Meats recently sent me one of their rack of lamb split loin roasts, and honestly, it was a little intimidating. Not only is this one of the most tender parts of the lamb, it needed some initial carving/butchering as well. Since one of my goals of this site is to make cooking less intimidating, I was happy to have the opportunity to demystify this formidable cut of beast.

I went with a French-inspired preparation of the dish. I carved the rack into a rolled loin roast, and used the leftover bone pieces to make an on-the-spot broth while the roast marinated. This broth then served as a base for my mint/parsley/mustard sauce.