Yesterday was my 40th birthday. I’ve spent many years thinking about this specific trip around the sun, and this milestone is important to me for several reasons. But perhaps most meaningfully, I clearly remember when my parents reached 40, and I felt that it was a significant time for each of them: a time to reflect on that transition from young-ish adult to middle age. It feels like by 40, most of your life’s decisions have lined up in a way that is relatively hard to break away from. And in that sense, I’m proud of the direction my life has taken, and those who have shared this journey with me.

So to celebrate, I’m sharing one of my most celebratory recipes. This is the recipe I usually take to potlucks, parties, and other gatherings. I shared a down-and-dirty version of this dish about five years ago (which you can find here, along with some history of the dish). I’ve made some fundamental changes over the years, and I’m positive that this is the definitive version. To give you some context: for Christmas this past year, I vaccuum-sealed, froze, and gifted this dish to my close friends and co-workers. If I was to ever open a restaurant, this dish would not only be on the menu, but it’d have an asterix by its title to indicate that it’s something special, something worth pausing and enjoying.

The dish requires a good amount of preparation up front: the day before you make it, you’ll want to make your stock, prep the meats, and chop the vegetables. That way, you can whip up the rest in the morning with minimal effort. Don’t let the planning intimidate you–it’s worth the effort.

1. The night before, make your Creole seasoning. Shell the shrimp, but save the shells/heads; throw them in a small stocktop along with the chicken stock. Bring to a boil over high heat, then simmer for 30 minutes on medium/low heat; if you’re feeling fancy, throw in some aromatics, like whole peppercorns, carrot tops, parsley stems, or celery leaves.

3. On the following day, slice the sausage into bite-sized pieces. Warm a large skillet over medium-high heat, then add 1 tbsp of the olive oil and warm until shimmering, about 30 seconds. Add the sausage and sauté until deep brown, about 10 minutes, stirring often. You want to cook the sausage a bit longer than you’d expect–it should be very crispy and a bit dry looking. Remove the sausage with a slotted spoon and set aside–keep all of that oily goodness in the skillet. Add the chicken to the skillet and sauté until well browned, about 8 minutes, stirring often. Remove the chicken with a slotted spoon and set aside (keeping that even better oily goodness in the skillet). Finally, add the garlic and sauté until fragrant, about 30 seconds, then plop the onion, bell pepper, and celery into the skillet. Sauté until starting to soften around the edges, about 4 minutes, then add 1 tbsp of the Creole seasoning, the can of tomatoes, the rosemary, and the bay leaves. Sauté until the vegetables are mostly softened, about 5 more minutes, stirring often, the remove the skillet from the heat.

4. Add a large stockpot to the fire, then transfer the vegetables to the stockpot. Once they start steaming, add the chicken/shrimp stock and stir to combine. Bring to a simmer, then add the rice. Once the stockpot returns to a simmer, reduce heat to medium and simmer until the rice is tender and has absorbed most of the liquid, about 15 minutes. Stir in the sausage (+ juices), chicken (+ juices), shrimp, parsley, green onion, and the remaining 1 tbsp of Worcestershire sauce, then cover and remove from the heat. Allow to steep for ten minutes, then add salt, pepper, and hot sauce to taste, and serve.

*** I usually don’t cook with parboiled rice because it is typically grown in Louisiana, Texas, or Arkansas, where they have higher arsenic levels (and parboiled rice absorbs more arsenic than plain white rice). But it’s an important rice to use in this dish, because it won’t turn to mush, an especially useful trait when transporting this dish to a potluck. So if you can find parboiled rice from places with lower arsenic content (like California), then great–or maybe just limit your parboiled rice to occasional use, like in this dish.

*** Want to take this dish to a whole new level? Throw in some chopped Tasso (recipe here) when you add the shrimp. 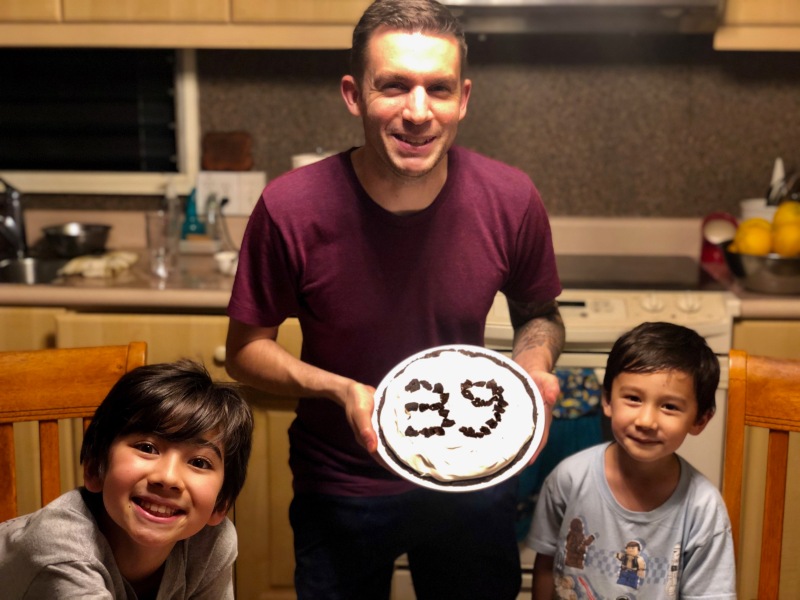 Here’s a pic from our birthday dinner (I made a New England Seafood Boil, which you can find in The Heritage Cookbook), this past Sunday. Since it’s bad luck to celebrate a birthday before the actual date, we celebrated my last day as a 39-year-old. My wife Janey made a chocolate cream pie with a gluten-free oreo cookie crust–it didn’t last long.