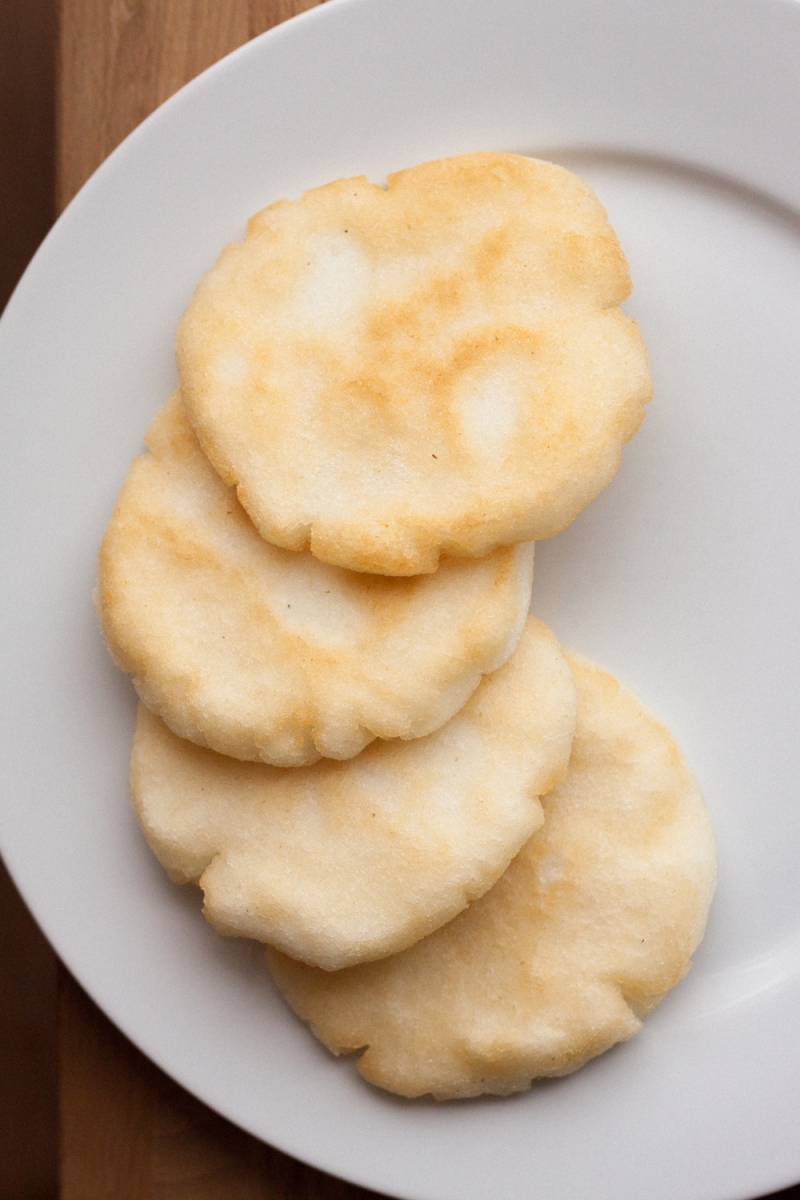 Let’s talk about corn a little bit. Although it’s a grain, it is considered moderately safe depending on individual tolerance, so this year our family has decided to try and re-introduce it into our diet. We don’t plan on eating corn that often (heck, I mentioned that I was going to eat corn six months ago and I’m just now getting around to it), but we like the idea of adding a little variety to our eating habits. Mainly, we plan on eating it in the form of tortillas, popcorn, and these little pieces of heaven you see in this recipe: arepas.

Arepas are corn cakes that are popular in Venezuela, Colombia, and other parts of Latin and South America. They couldn’t be simpler to make – ground corn, water, and salt – but they bring a unique texture to other foods. Something about the crispy outside and slightly-mushy inside make them the perfect little sandwich pockets. It’s hard to describe, but they have a density and feel not unlike buttermilk biscuits, but a little grittier.

There are other brands of white corn meal out there, but Harina P.A.N. originated in Venezuela, contains no additives, and is the general standard for making arepas. Sounds good enough to me.

In a mixing bowl, add the corn meal and salt, and slowly pour in the water, mixing it with your hand. The consistency should be doughy, and dry enough not to stick to your hands too much. 1 1/4 cup of water should be plenty, and you may not have to use all of it. Once you have a good consistency, let it sit for five minutes.

Warm up a pan with a little of the lard/butter on medium/low heat for a few minutes. Next, form 1/4 of the dough into a ball, and then gently mash it into a hockey puck that’s about 1/2″ thick. Grill the arepa, about six to eight minutes per side, until it’s nice and browned. If it starts to smell too strongly of corn, reduce the heat to prevent scorching. Repeat the process for the other 3/4 of the dough, keeping the finished arepas warm in the oven (170 degrees should be fine).

Next comes the fun part. Slice the arepa in half using a bread knife (this has officially become the only thing we use our bread knife on), butter each side, and put whatever the heck you want inside. Meat, cheese, veggies, whatever. It went perfectly with some leftover kalua pig, like in the picture at the top. I also had some cold chicken and sauerkraut with one recently, and it was awesome.

So yeah, although there are plenty of people that don’t allow corn in their diet (see video below), and while I can totally dig that, we’re mighty happy to try out arepas from time to time.