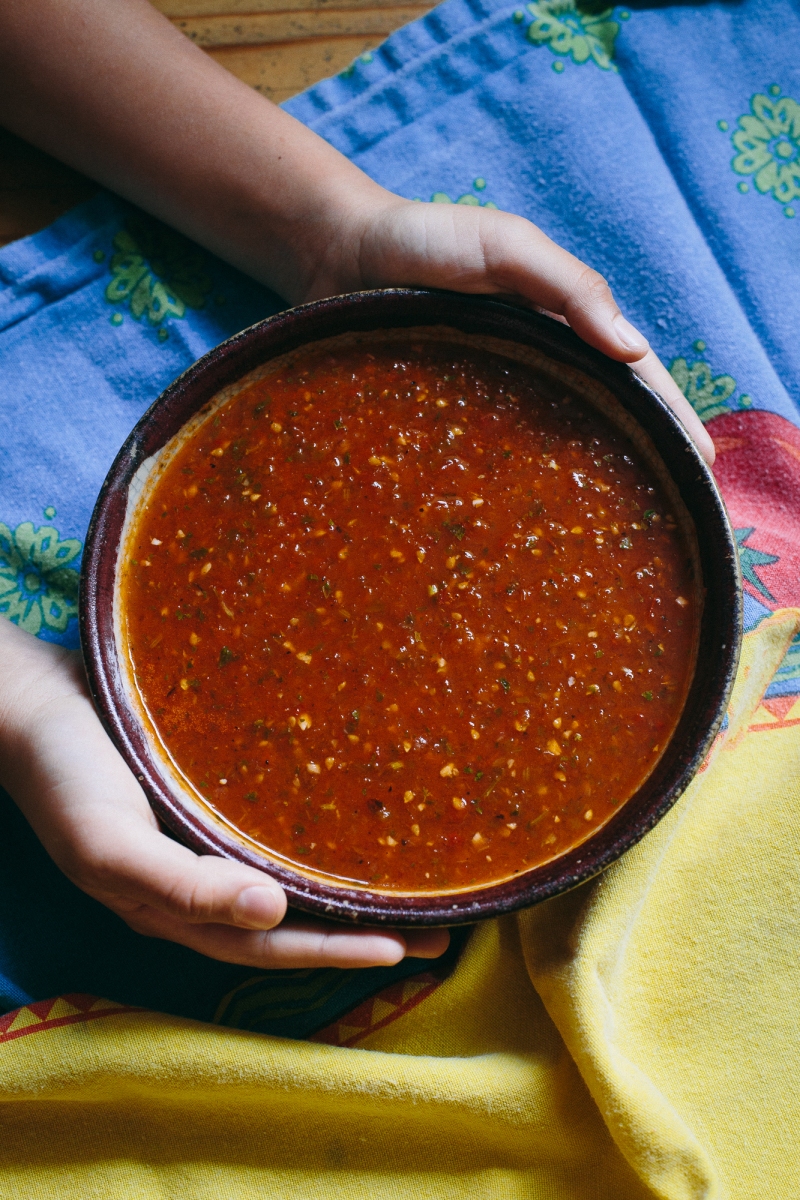 Everyone needs a steady, foundational salsa recipe. One that is worlds better than the jarred stuff you find in the store, but also won’t take a million years to throw together. I like to think that my Simple Salsa Roja easily fits that requirement: unbelievably fresh just as you pull it off the heat, and even richer the following day.

Two elements make this salsa unique. First, I like to use one dried morita chile pepper to add a hint of smoked fruitiness. Next, I simmer the salsa with a couple tablespoon of lard, for a balanced bite and smoother mouthfeel.

Moritas sound exotic, but they are just smoked red jalapeños (also known as fresno chiles), much like chipotle peppers. The difference between morita and chipotle chiles is that moritas are smoked for less time, retaining a bit of fruitiness. To make things even more complicated, this pepper goes by several other names, like blackberry chile, chipotle colorado, mora chile, or black dash red chile. My advice: check out the dried pepper section of your local grocery store (or latin food market), and if you can’t find a morita or chipotle, pick them up online for relatively cheap. They are worth the extra bit of effort, and since only one pepper is needed for the recipe, one bag will last you a while.

1. Bring a small saucepan of water to boil over high heat. Warm a cast-iron skillet or comal over medium-high heat, then briefly toast the morita pepper until aromatic, about 10 seconds per side, then transfer to the saucepan of boiling water. Be sure not to burn the pepper, as it will turn bitter. Remove the saucepan from heat and allow to steep until softened, about 10 minutes.

2. Add the whole tomatoes, onion, jalapeño, and garlic to the skillet, and toast until charred on each side, about 2 minutes per side, then transfer to a cutting board to cool (the garlic might char before the others, so keep an eye on it). Be sure to open a window or turn on your overhead fan, as the skillet will likely smoke as you char the ingredients. Once cool, coarsely chop the tomatoes and onion. Remove the stems, seeds, and ribs from the jalapeño (leave the seeds and ribs intact for a spicier salsa), and peel the skin from the garlic. Remove the morita pepper from the water and remove its stem, seeds, and ribs (leave the seeds and ribs intact for a spicier salsa).

3. For best results, use a mortar or molcajete, but a food processor will do. To make in a mortar, grind the garlic and salt until creamy, then add the onion and grind until nearly mashed. Add and grind the cilantro and oregano until minced, then add and grind the peppers and tomatoes into a chunky sauce (be sure to mash up those tomato skins really well). To make in a food processor, add the garlic, onion, peppers, and tomatoes to a food processor. Pulse until well-blended but still very chunky, about 6 pulses. Add the cilantro and oregano and pulse until uniform but still a bit chunky, about 6 more pulses.

4. Warm the lard in a large saucepan over medium heat. Add the salsa and bring to a simmer; reduce heat to medium-low and simmer until slightly darkened, about 10 minutes, stirring often. Season with salt to taste, then remove from heat and serve warm or at room temperature, with tortilla chips, or Siete chips for those who like to keep things grain-free.

** If you use the food processor method, you might get a few unblended tomato skins in your salsa. They’re packed with flavor since they are charred in Step #2, but if you’d rather not deal with them, simply peel them once they are cool, but before you chop them.

** As written, this recipe is of medium-low spiciness; to increase its intensity, use a serrano pepper instead of a jalapeño, and maybe keep the serrano and morita seeds and ribs in the salsa.

Note: In the year leading up to my new cookbook’s release, I will be regularly releasing these recipes to 1) maintain a continuing conversation with my readership and 2) give visitors to this site an opportunity to test and provide feedback before editing. For more information on this new approach, read my post here.