For those of you who remember my Caribbean Sticky Wings recipe from last year, I jumped into the world of pellet grills about 18 months ago. Before then, my longtime grilling setup had been three-fold: a charcoal grill for direct-heat grilling, an electric smoker for low-and-slow BBQ, and a gas grill for consistent temperatures with minimal effort. After getting acquainted with that first pellet grill, I decided to sell my electric smoker and gas grill because the pellet grill provided the consistent temperature I like to rely on during recipe development, as well as low-and-slow temperatures for exceptional BBQ (see: my 3-2-1 Smoked Ribs recipe); I kept the charcoal grill on hand for high-heat direct grilling.

Recently, the team at Camp Chef offered to send me one of their new Woodwind 24 WiFi pellet grills, which seemed to be a significant upgrade to my current grill. So I thought I’d take a moment and run you through my impressions. 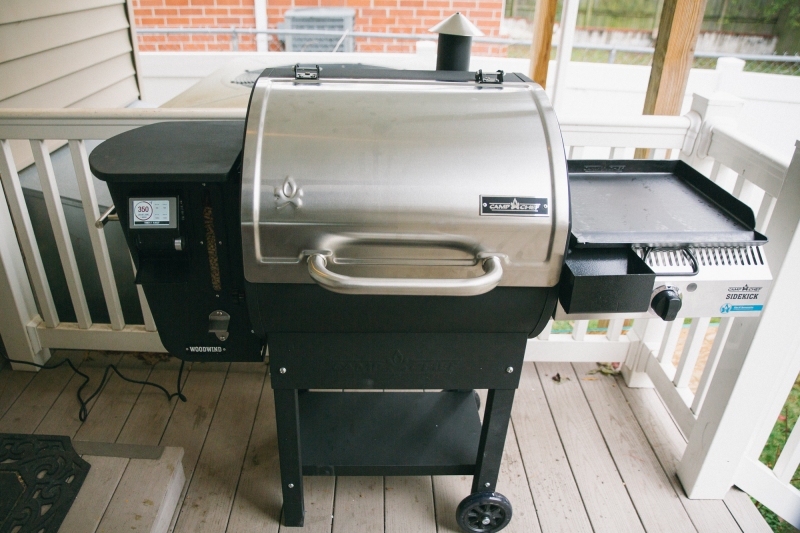 Here’s a shot of the whole shebang, so you can get an idea of what I’ll be describing in the following paragraphs. The grill itself feels nice and sturdy, and putting it together took less than an hour on a chilly, cloudy December afternoon in Virginia. The included bottle opener makes the assembly process a bit more exciting.

Pellet grills are relatively simple; they feed pellets from a hopper (on the left of the grill chamber) through an auger — think of it like a big corkscrew — at the bottom of the grill. The pellets ignite inside a firepot, which heats the grill and provides wood smoke. The firepot is tented by a heat diffuser pan, which distributes the heat evenly throughout the grill. The grill temperature is regulated by that auger: the faster the pellets are added to the firepot, the hotter the grill will get. This process allows you to impart a smoky flavor without having to tend to a charcoal or wood fire. 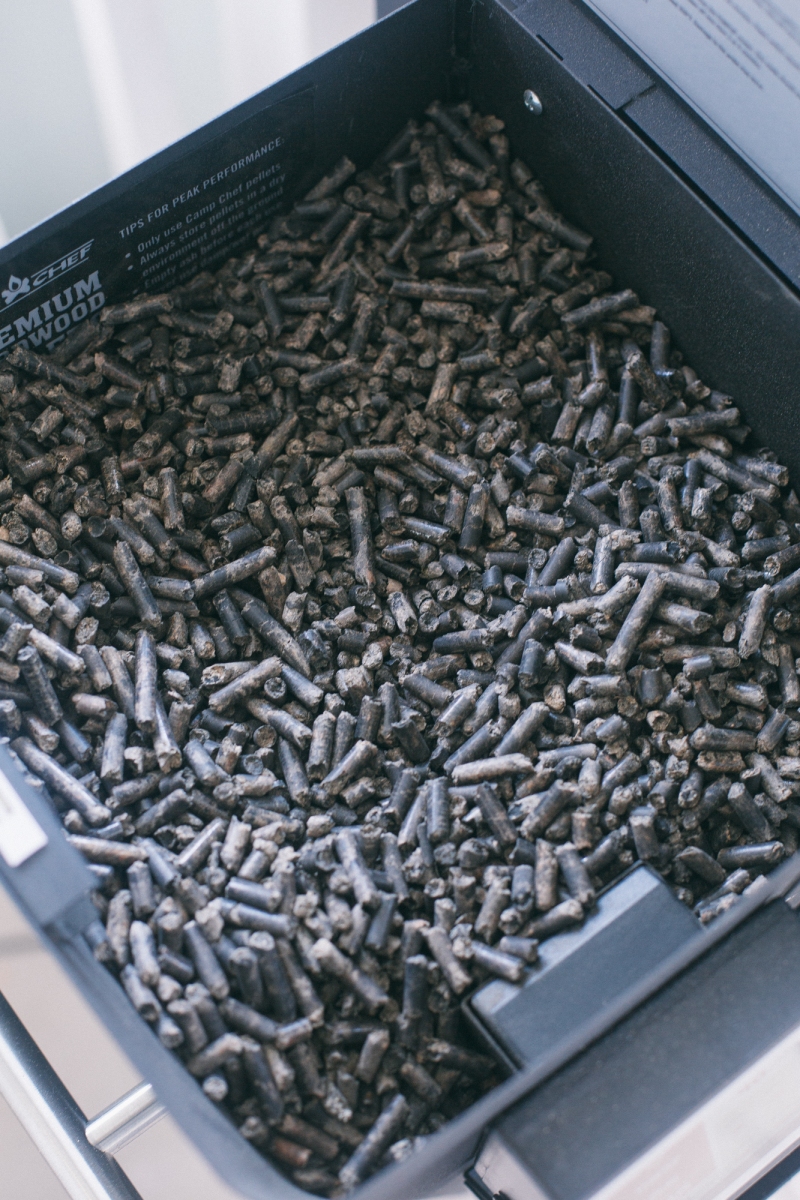 There are a variety of pellets you can buy, including hickory, maple, or fruit woods like cherry or apple. Camp Chef also offers a “competition” blend of maple, hickory, and cherry pellets. Also new to the lineup are “charwood” (charcoal and wood blend) pellets, which you can see above. This charwood blend works really well for high heat grilling, like burgers or the Tandoori Chicken pictured near the end of this review.

One aspect worth noting is that the hopper on this Woodwind 24 holds 22 lbs of pellets, which is a perfect size since most bags come in 20-lb quantities. If you want to swap out pellets for different types of cooking projects, the process is easy: there is a hopper cleanout chamber that lets you empty the hopper at any time.

The grill chamber itself is relatively tall, which provides a surprisingly large cooking space (800 square inches across two racks); a couple weeks ago, I fit four (10 lbs each) picnic pork shoulders on the main (bottom) rack alone, which made enough pulled pork to feed about 50 people. The louvered drip pan that sits below the bottom rack has little slits in it to help with airflow (more on that in a bit).

Another thing that impressed me about Camp Chef’s pellet grill family is that they offer optional propane attachments. I got the “Sidekick” attachment, which is basically a powerful propane burner and a removable griddle (pictured above). This gives you lots of options–you could use griddle to make eggs and bacon, or simply use the burner and a cast-iron skillet to sauté veggies, sear steaks, or blacken fish outdoors without smoking up the whole house. The pellet grill definitely gets bulkier with an added propane tank, which can be an issue since this grill already weighs 150 lbs without the tank. Camp Chef also offers a “Searbox” attachment, which basically functions as a mini gas grill (but looks to be handy if you really want nice sear/grill marks).

The updated interface is really what sets this grill apart. As the name implies, the grill has WiFi connectivity, so you can monitor (and adjust) the grill temperature from your phone. It also has Bluetooth connectivity, and you can connect to both at once to make sure you don’t drop the connection. Its companion app is relatively barebones, but gets the job done; it sends me push notifications when my grill has finished warming up, and once it has reached my desired temperature. This model also supports four temperature probes (just to the right of the screen in the photo above) which can be monitored on the screen and the app (you can also set target temperature for the probes, and get a notification when the probe has reached that desired temperature).

The heat settings are customizable from 160F to 450F in five degree increments, which is just mind-boggling. But perhaps my favorite option is that you can adjust the amount of smoke the grill imparts, from a default of “1” to a maximum of “8”. The higher the smoke setting, the more pellets you’ll burn, and the temperature will fluctuate a bit more as well. But I’ve found that a smoke setting of “3” is perfect for BBQ, so I’ve never adjusted it to higher than “3”.

There’s a knob in the picture to the left that allows you to move the heat diffuser so that the firepot (heating element) interacts directly with the grill racks, simulating a direct-heat grilling experience with temperatures up to 650F. They call it a “Slide and Grill” feature. While this sounds like a good idea, in practice it became my one gripe with this grill. 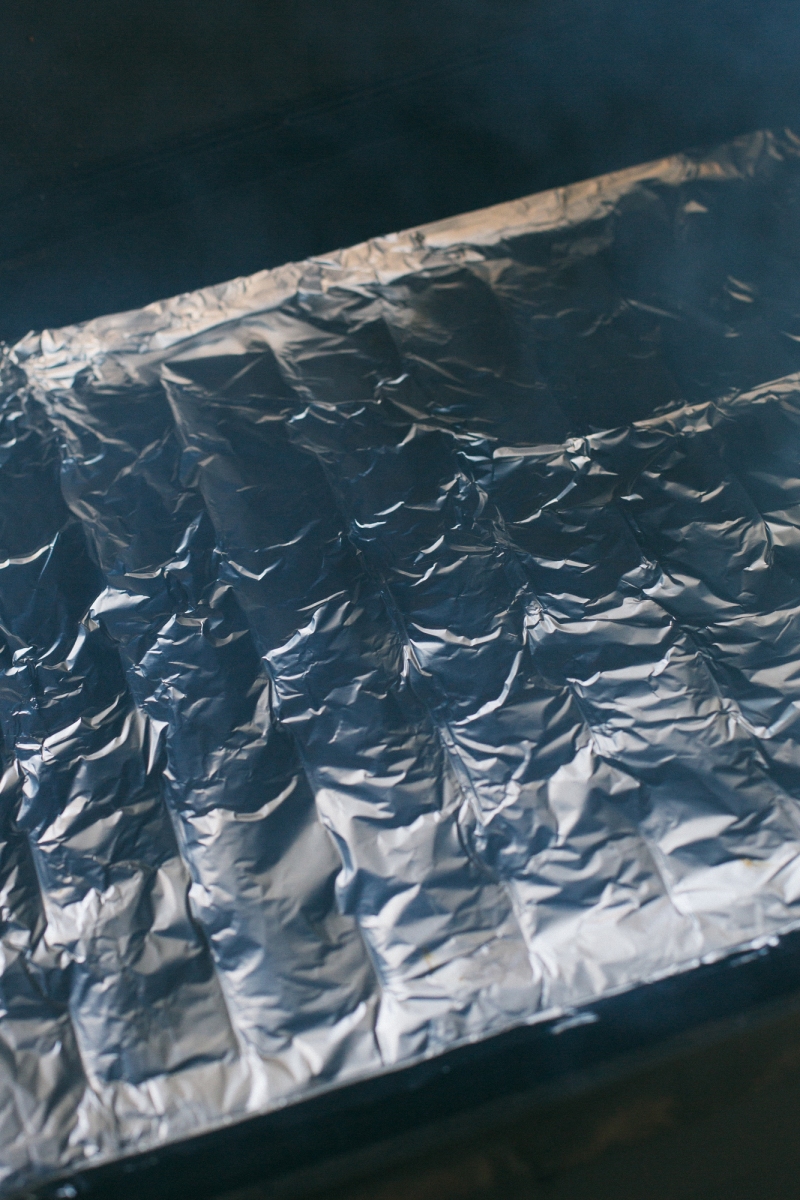 I learned that I’m not a fan of those little slits in the drip pan, which are supposed to help with airflow; instead, I found that they just make a big mess, since the food juices drip directly onto this pan and can leak onto the heat diffuser, or directly into the firepot when using the “Slide and Grill” feature. Instead, I’ve been covering the drip pan with a layer of heavy duty foil. This has immensely improved my cleanup and overall cooking experience, and has kept the grill in pristine condition, although it does inhibit the “Slide and Grill” option. I think it’s a necessary trade-off to maintain the grill for years to come. 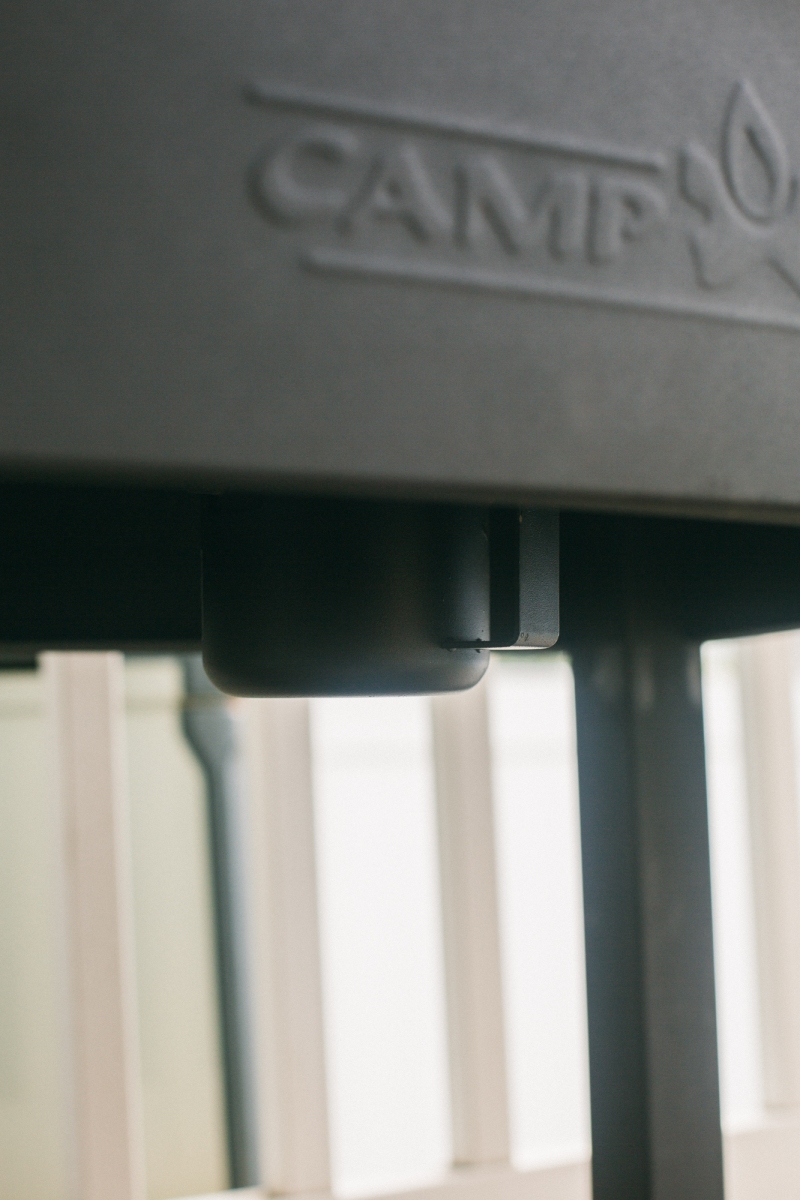 Another feature I appreciate is their “Ash Kickin’ Cleanout System”, which is a removable cup that collects all of the ashes from the firepot. This allows me to clean up the firepot in a few seconds, and without having to remove the grill grates, drip pan, and heat diffuser.

I have plenty of recipes I’ve developed using this pellet grill, and I’ll share them in the coming weeks. For now, enjoy a few teaser pics. First up: Smoked Standing Rib Roast (recipe coming next week, just in time for your big holiday party). 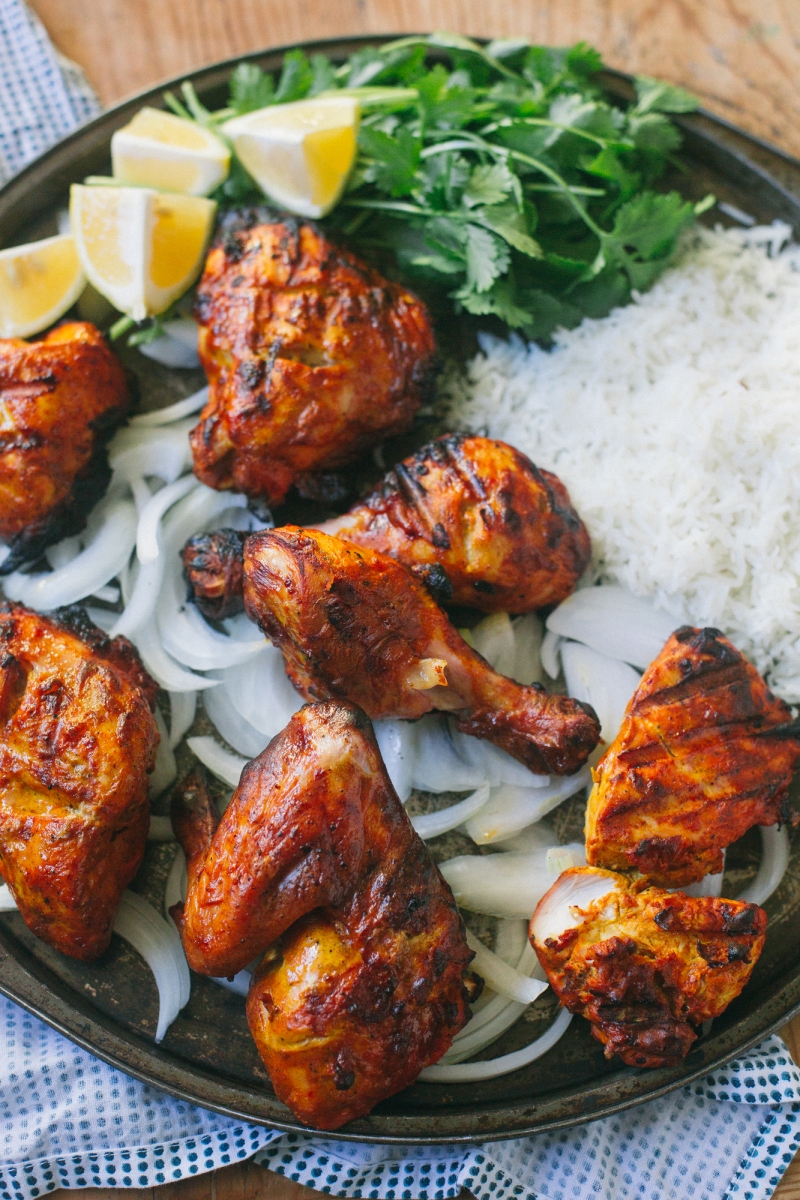 And finally, some Smoked Salmon, prepared similarly to how I grew up eating it in the Pacific Northwest.

Overall, the Woodwind 24 WiFi pellet grill is a keeper. After two weeks of use, I’ve already gifted my other pellet grill to a friend, and decided to use this Camp Chef product as my main grill. I think my minor quibbles with the drip pan are easily overcome with a bit of foil, which I’ve already incorporated into my grilling routine. What really sold me on the grill is its insane customizability; grilling foods at 5 degree increments, not to mention manually controlling the amount of smoke, are both real game-changers for my backyard BBQ adventures.

The Woodwind’s WiFi connectivity also offers a nice piece of mind, saving me frequent trips to the backyard while I’m whipping up other creations in the kitchen. I appreciate the Sidekick accessory, but I’m not sure it’s a day-one purchase; you could always initially invest in the exceptional pellet grill on its own, and add a Sidekick later (and delay that hefty $265 price tag until you’re sure you’re going to use it).

If you’re thinking about diving into the world of pellet grilling, or are looking to replace your current grill, this Woodwind 24 WiFi pellet grill has my vote. I look forward to showing you some of my new creations soon! Let me know if you have any questions in the comments below.

Note: Camp Chef provided this grill for review, and all opinions are my own. If you purchase something via the links to Camp Chef above, I may earn a small commission of the sale.