Recently, I stumbled upon J. Kenji Lopez-Alt’s technique for pressure-cooker risotto, and decided to take it for a spin using my Instant Pot electric pressure cooker. Considering that risotto has been around for 600 years, it’s nice to see a new spin on a classic preparation.

This technique worked perfectly (big surprise), so I have been using it frequently as a means to make perfect risotto without all that stirring. I even had to buy a new bag of arborio rice this past weekend, which is a rare occurrence – risotto rice always seems to last forever. If you don’t have a pressure cooker (yet!), don’t worry, I’ve included stovetop instructions as well.

To highlight this new take on risotto, I decided to err on the side of decadent: duck fat, mushrooms, prosciutto, and orange zest all fit together seamlessly to form a dish that’s equal parts familiar and exotic – and surprisingly dairy-free, to boot.

END_OF_DOCUMENT_TOKEN_TO_BE_REPLACED

I don’t reverse-sear often enough. When faced with a choice chunk of beef, my go-to method is a traditional sear (see one of my favorite recipes of last year, this Roast NY Strip Loin). But many prefer a reverse-sear, where you cook the meat to just under your desired temperature, then blast it with some high heat to finish it off. This allows you to heat the meat evenly and results in a better distinction between the crispy crust and tender center (here is a good writeup). So I decided to share this method using these miso-marinated boneless short ribs.

Many folks in the Paleo world eschew all forms of soy, and balk at the idea of cooking with miso. But as I mentioned in my five years Paleo post last month, I believe a more nuanced approach to diet is appropriate, and we shouldn’t discount all foods from particular groups (even if it does make for handy and marketable “eat/avoid” charts). Here’s my stance on soy, taken from the pages of Paleo Takeout:

“Make no bones about it—soy is pretty terrible for you. It has been linked to malnutrition, thyroid dysfunction, cognitive decline, reproductive disorders, and even heart disease and cancer. It has one of the highest toxin profiles of any legume, and it’s baffling that we feed this stuff to our children via infant formula.

But there’s a bright spot in all this doom and gloom; fermenting soy, especially through the long, slow process of making tamari and miso, eliminates its phytic acid and other digestive inhibitors. However, the fermentation process doesn’t totally destroy phytoestrogen, another bad guy, although it does reduce it by up to 90 percent; you’re likely ingesting more phytoestrogen through sesame seeds and garlic than through fermented soy.”

Miso’s bold flavor makes for a great marinade. Adding a bit of acidity, in the form of mirin (sweet rice wine) and sake, helps tenderize the meat as well.

END_OF_DOCUMENT_TOKEN_TO_BE_REPLACED

One of my favorite reasons to grill in the cold is that it creates contrasting experiences. Winter in the air, summer in your bowl. This idea is best exemplified in these Chicken Teriyaki Bowls, accented with apple slices and white rice seasoned with furikake (I like Urashima furikake, which is made without additives).

Teriyaki sauce can be traced back to the Edo age in Japan, which started in the 17th century. An increase in urbanization and exposure to outside cultures resulted in an influx of new ingredients, which converged to make this tangy, sweet sauce that is perfect for grilling. Japanese restaurants gained prominence in the United States in the 1960s, and teriyaki sauce became the household name that it is today.

END_OF_DOCUMENT_TOKEN_TO_BE_REPLACED

It’s a New Year, which means many folks are just starting (or restarting) a new healthy eating adventure. One of the more popular eating challenges is the Whole30 (heck, it’s the #6 book on Amazon as of this morning). It’s been a few years since I’ve done a Whole30, which is a 30-day program with explicit guidelines. It doesn’t stray far from the way I eat anyway, other than the fact that it’s more stringent on honey, alcohol, dairy, and rice than my typical diet.

One thing I remember from my last Whole30 (in 2012, if memory serves me) was that I had a hard time keeping up my carb intake – at the time, the only carb-heavy foods allowed were sweet potatoes, beets, and plantains, which grew tiresome after a month of eating them. Luckily, the folks behind Whole30 remedied that in 2014, when they added white potatoes to their list of allowed foods. Hopefully this recipe – which includes two starchy vegetables – will make this month’s Whole30 a bit easier for everyone (also, don’t forget about this guide which transforms 94% of the 250+ recipes in Paleo Takeout to be Whole3o-compliant).

The turnip is one of the first cultivated vegetables, with some records dating back 17,000 years. Turnip roots aren’t as popular in the US as their greens, which are similar to mustard greens in taste. This soup is one of my favorite ways to prepare turnips, as it accentuates the natural creaminess of the root; serve this to your guests, and they won’t believe you that it’s dairy-free. Adding potatoes to the soup adds more body and heft to the dish, warming the belly on these cold winter evenings.

Fun fact: the rutabaga, another common root vegetable, was originally a cross-cultivation of the turnip and cabbage. It is also referred to as “neep” in some countries, likely a carryover from the Old English word næp (and before that, the Latin word napus), which meant “turnip”. Rutabagas and turnips are often confused for one another, with a common misconception that rutabagas are just large turnips.

END_OF_DOCUMENT_TOKEN_TO_BE_REPLACED

Bobotie is a baked mincemeat dish and one of the more recognizable foods to come out of South Africa. It’s commonly believed that Bobotie was first derived from the Javanese dish Botok, as Dutch colonists brought the dish to South Africa from their settlements in Indonesia (née Dutch East Indies) in the 17th century. While Botok is made with minced meat wrapped in banana leaves, Bobotie is often seasoned with curry powder and dried fruit and baked with a egg custard topping – a reflection of both local ingredients and European colonial tastes.

This dish joins the ranks of other dishes on my blog, like Mulligatawny Soup and Sukuma Wiki, as exotic-tasting meals that can be created using items you likely already have in your pantry. These are some of my favorite dishes to create and share, as they have a fairly low barrier to entry but can expand your palate and culinary repertoire.

END_OF_DOCUMENT_TOKEN_TO_BE_REPLACED

As far as I can tell, one of this year’s most popular gadgets was the Instant Pot, an electronic pressure cooker that doubles (triples, etc) as a slow cooker, rice pot, steamer, yogurt maker, and more. I’m most frequently asked to develop recipes for it by my readers, followed closely by folks looking for slow cooker (crockpot) recipes. So this week’s Pot Roast recipe is the best of both worlds – a pressure cooker recipe that also includes instructions for slow cookers. Heck, I even threw in Dutch Oven instructions while I was at it.

END_OF_DOCUMENT_TOKEN_TO_BE_REPLACED 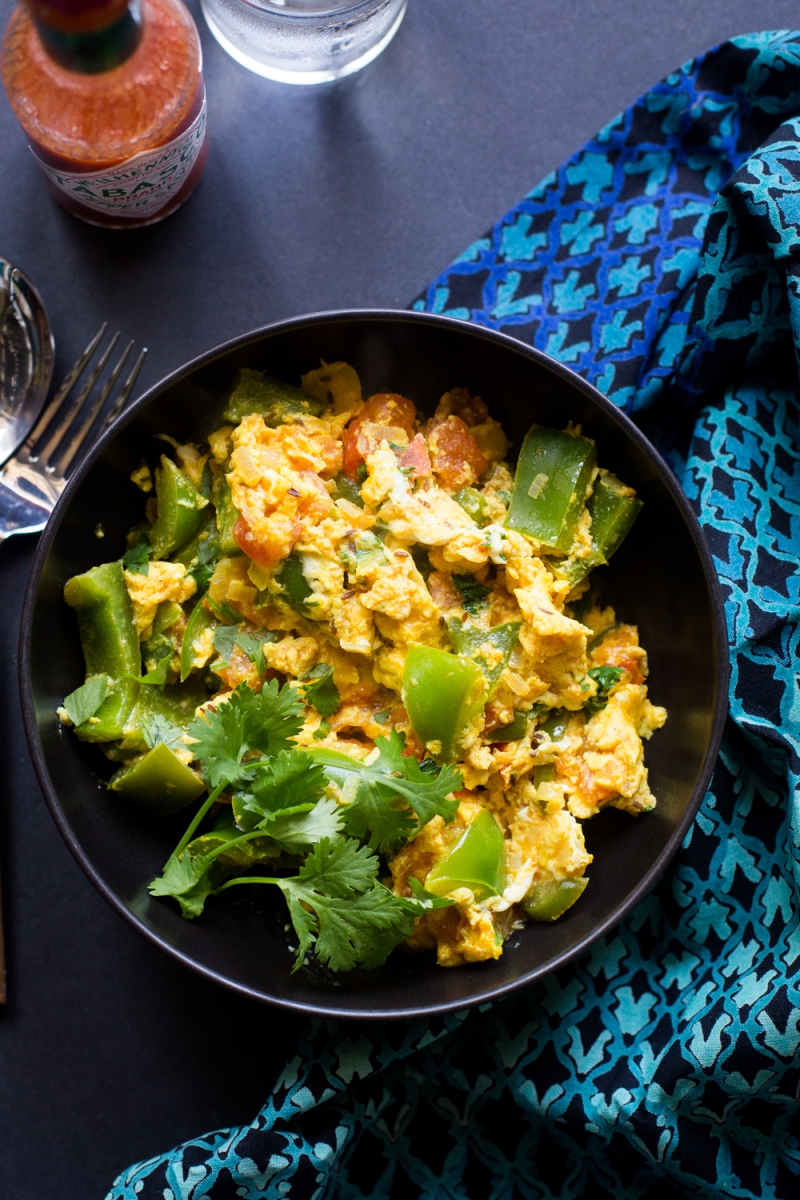 Many mornings, I wake up in the mood for eggs…but also not in the mood for eggs, you know what I mean? The consistency and flavor of traditionally-prepared eggs are both a godsend for predictability and a major exercise in patience for discerning eaters like yours truly. And it’s not just me who is sometimes bored with eggs; it’s a global pheomenon, demonstrated by the myriad of ways to prepare eggs – scrambled, fried, flipped, deviled, basted, roasted, poached, shirred, boiled, and scotched. I feel like a cast member of Forrest Gump right now, but you get my point.

Egg Bhurji is a recent favorite, as it combines exotic South Asian flavors with an egg scramble for delicious effect. All it takes is a bit of prep to chop and soften the vegetables before adding in the eggs; it’s definitely worth that extra few minutes of effort.

END_OF_DOCUMENT_TOKEN_TO_BE_REPLACED

When filling out our weekly meal plan, my family often consults my cookbooks; after all, the main reason I included particular recipes in those books is because they’re our favorites. This week we decided to make the Thai Red Curry recipe from Paleo Takeout, and I thought it would be fun to share the recipe with you folks as well.

Thai Red Curry differs from other popular Thai curries in that its base is made from dried chiles instead of fresh chiles. In order to temper the considerable heat of dried Thai chiles (usually the only chili used in traditional Thai Red Curries), I use a combination of large, mild dried chiles (like Anaheim, Guajillo, or New Mexico chiles) and spicy Thai chiles. To increase the intensity of your curry, simply add more spicy chiles.

END_OF_DOCUMENT_TOKEN_TO_BE_REPLACED

So, I’m apparently way behind on my blog posts, since I’m sharing a corned beef recipe a month after St. Patrick’s Day! Truth be told, I’ve been so busy traveling and working on Paleo Takeout that I didn’t have a chance to make this holiday meal until recently, but it turned out so well that I wanted to share it with you folks immediately. Part of why it worked like a charm is because of my handy Instant Pot electronic pressure cooker, which cut the cooking time of this dish down to just over 90 minutes.

The corned beef I used for this dish was this uncured corned beef brisket from US Wellness Meats. Because it is traditionally preserved (without the use of sodium nitrite), it doesn’t have the pink color that we’re accustomed to when we think of modern corned beef. But fear not – it tastes just as good as what you’d expect.

The term “corned beef”, as you have probably guessed, has nothing to do with corn. A logical conclusion would be that it is seasoned with peppercorns, but that’s not the case, either. The secret is that in medieval times, “corn” was a description of salt when in a large-grain form. So really, it just meant salted beef, which is a process that has been around for thousands of years. The specific term “corned beef” is traced as far back as the 11th century in Ireland (600 years after St. Patrick was around, by the way). The concept of eating corned beef and cabbage (sometimes referred to as New England Boiled Dinner) on St. Patrick’s Day is a mostly American concept; a more appropriate Irish dish to enjoy on St. Patrick’s Day would be Colcannon.

END_OF_DOCUMENT_TOKEN_TO_BE_REPLACED

I know what you’re thinking. It’s something like this – “Seriously, Russ? You already have an awesome Swedish Meatball recipe in your cookbook. Way to put a new coat of paint on your old favorites.”

First of all, thanks for the compliment. Second, these meatballs are a little different. For example, Danish Frikadeller are often smashed and look more like little patties than those little round balls you might be expecting. Think of them as Denmark’s LEGOs (probably their coolest invention) vs. Sweden’s crescent wrench (also a cool invention); both are useful, but serve slightly different purposes.

The recipe itself differs from Swedish meatballs in that I found that adding a bit of tapioca starch makes the balls stick together really well, and they’re pretty delightfully spongy, too. I also played around with the spices until I found something that delivered a distinctive Old-World taste while using common pantry items.