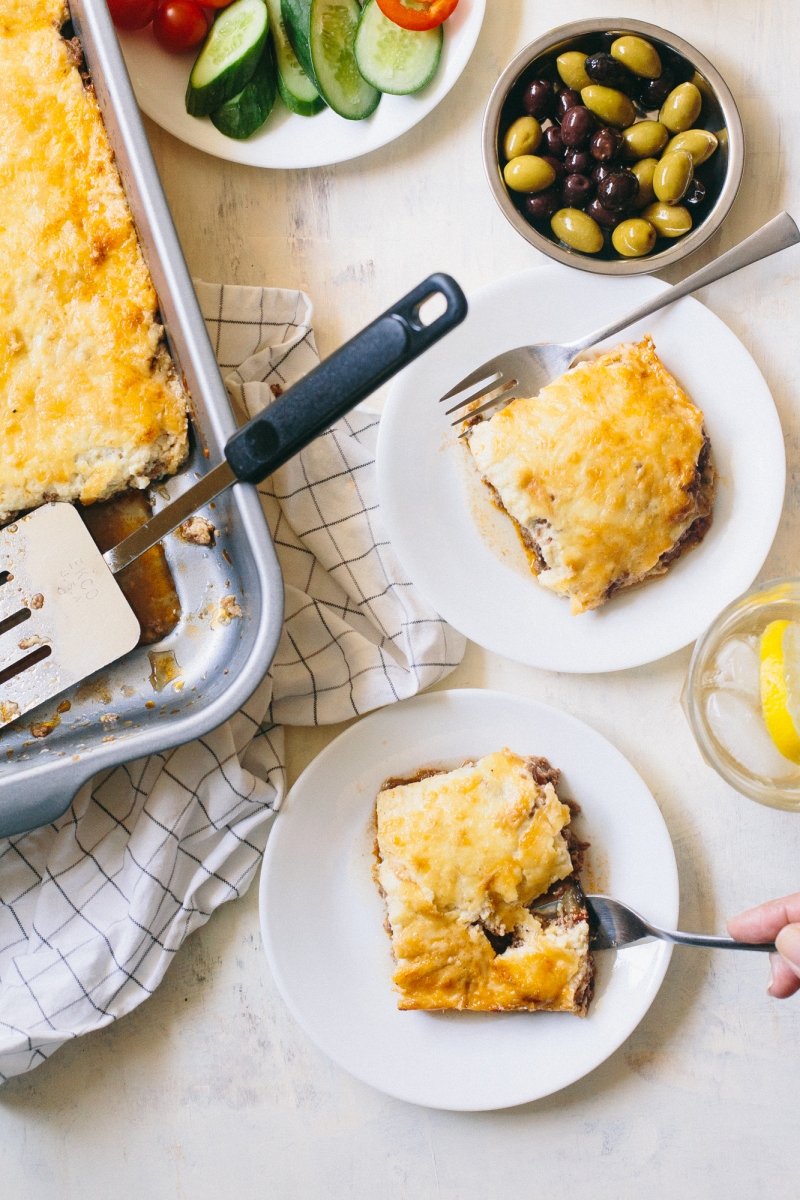 Ah, casserole season. I don’t know what it is about this time of year that makes me want to layer a bunch of foods together into a large dish and bake them.

Moussaka is an eggplant casserole of various preparations and presentations. In the Middle East, Moussaka is a sauteed eggplant and tomato dish served cold; in Greece (as in this recipe) it is layered with meat and eggplants, then topped with a Béchamel sauce and served warm; in Turkey, it is not layered or topped with sauce, but served with rice pilaf; in the South Slavic states, it is layered with potatoes instead of eggplants, and topped with custard.

END_OF_DOCUMENT_TOKEN_TO_BE_REPLACED 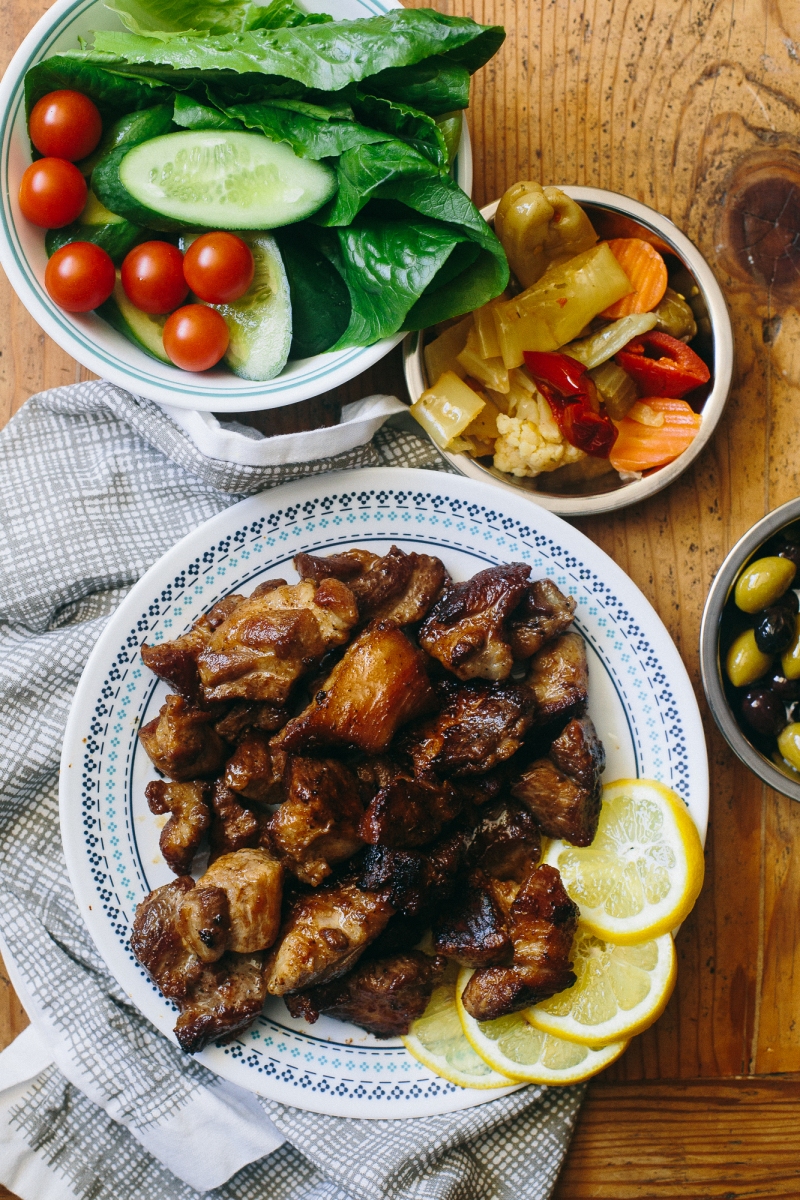 Pork shoulder is great: often one of the most affordable cuts of meat, and it can be used in a variety of dishes, from Kalua Pig, to Pork Adobo, to hearty stews. But most preparations call for extended cooking times, to break down all of that connective tissue and create a very tender bite. We’re going to do things the Greek way this time around, and give them a quick pan-fry, followed by a simmer in a flavorful sauce.

This preparation visits the other end of the pork shoulder spectrum: cooking the meat just through, so it’s still tender and super juicy. We’ll keep the prep and cook time to under an hour, with lots of hands-off time so you can prep a salad and pickled veggies to go with the meal.

In case you missed my post from last week, I’m officially accepting recipe testers for my next cookbook, which will be entitled The Heritage Cookbook! Recipe testing is open to the public until January 28th (which is also when feedback is due), so don’t delay!

END_OF_DOCUMENT_TOKEN_TO_BE_REPLACED 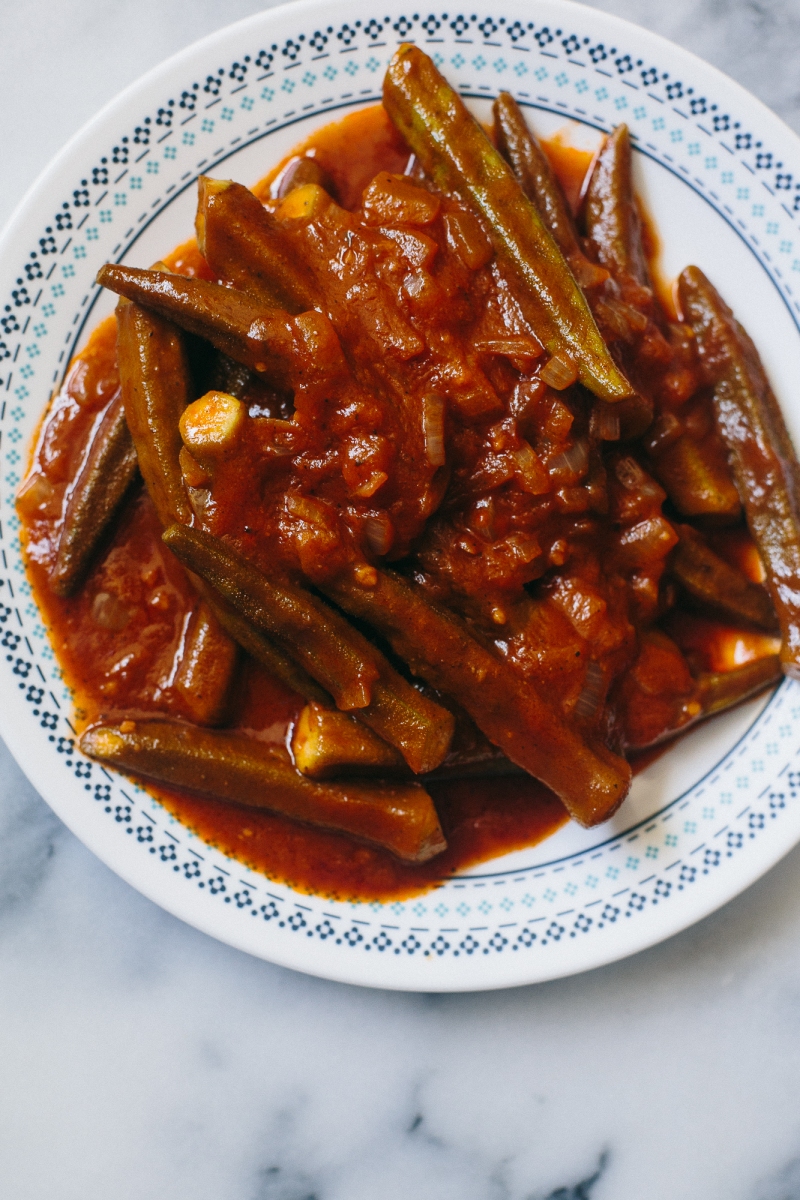 As we enter into November, I have exciting news – I’m just about done with developing and photographing recipes for my next cookbook! I’ve been at it for nearly two years straight – researching, testing, and retesting. I’m looking forward to moving to the next stage of the book-writing process, as I organize the contents, design the layout, and edit the manuscript. To be honest, editing is my favorite part of writing books; I like making small, incremental tweaks to refine my voice, and perfectly lining up every little element of the narrative.

So in celebration of moving on to the next (and arguably the most complicated) stage of the process, let’s enjoy this simple Greek stewed okra recipe. These okra fall into the lathera (λαδερά), or oil-based, dishes commonly found among Greek home chefs – simple to prepare, but packed with flavor. This dish works well as a hearty side, but really shines during Lent or other fasts, since it is remarkably filling thanks to its generous helping of olive oil.

END_OF_DOCUMENT_TOKEN_TO_BE_REPLACED 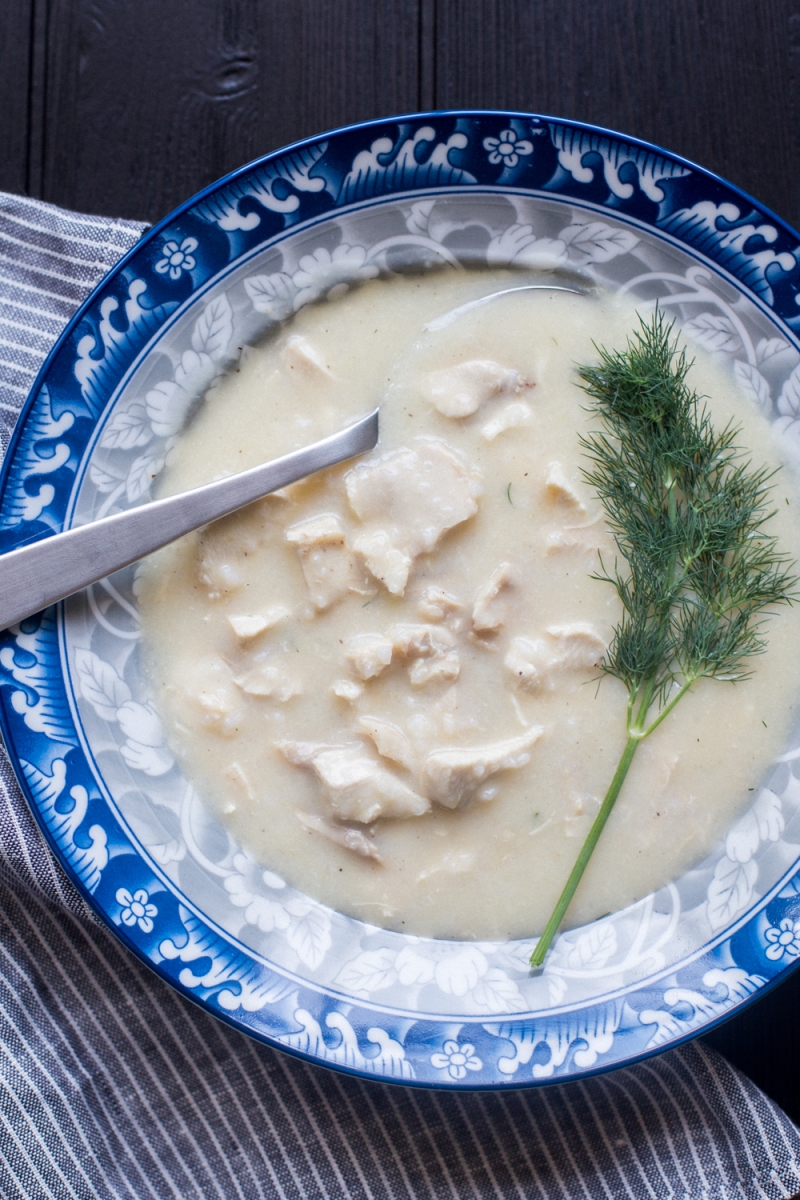 Avgolemeno is a Mediterranean sauce and soup, most commonly associated with Greece. As a sauce, it’s often served with Dolma or used as a vegetable dip. But if you ask me, it really shines the most as a mild and comforting soup, and that’s why I’m sharing this recipe with you today. It features egg yolks and lemon juice which enrich and enliven the soup, and some fresh dill brings it all together to give it a distinct and just slightly exotic flavor.

I’m a big fan of taking my time when making recipes. After all, cooking is one of my main sources of relaxation (second only to reading cheesy sci-fi). But I realize that’s not always the case for folks, so I’m trying something new today; below you’ll find a “short version” of the recipe that can be made in 20 minutes, as well as the traditional 2-hour version. Let me know what you think. If you like it, I’ll try to incorporate more variety into my recipe posts (kind of like how I’ve been adding pressure-cooker versions to some recipes).

END_OF_DOCUMENT_TOKEN_TO_BE_REPLACED 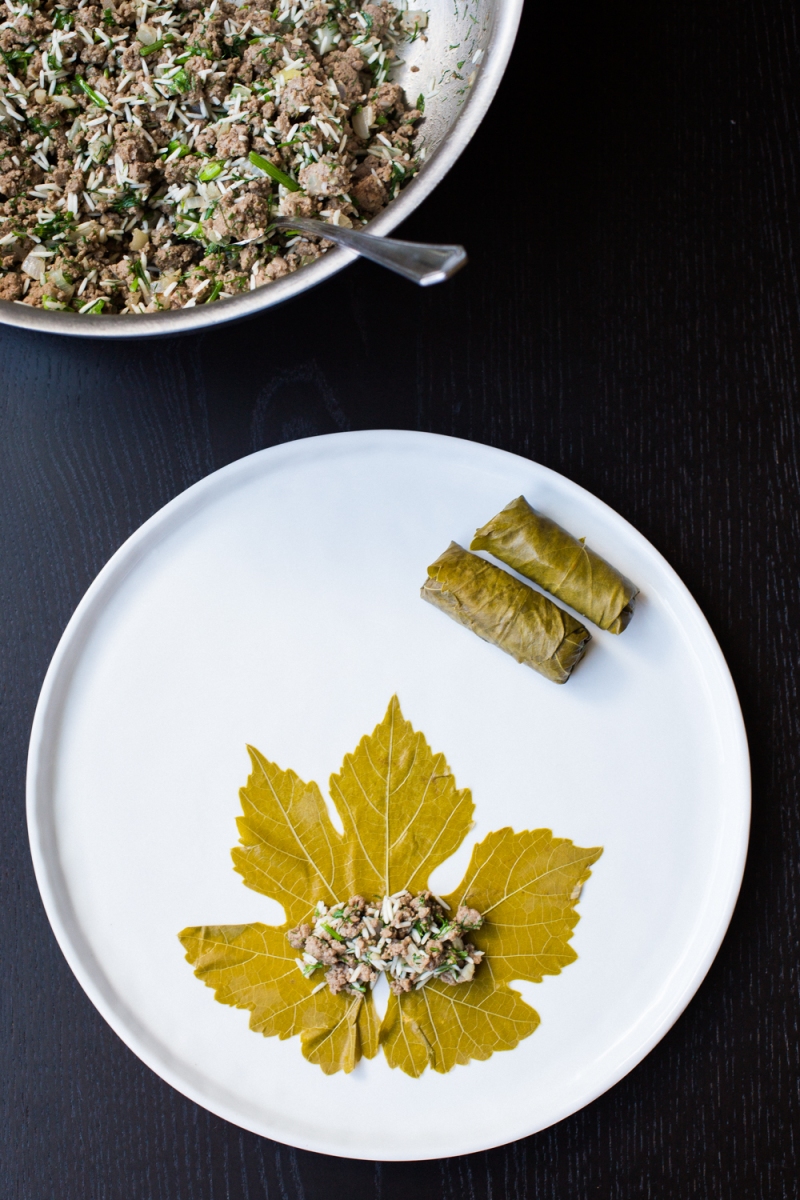 Dolma are stuffed grape leaves, originating in Turkey but expanding all over the Mediterranean, Middle East, and beyond. Their filling can be anything from tomatoes, to eggplant, to meat – really, you can’t go wrong with stuffing these little guys. This particular recipe is the Greek variation, called Dolmathes (an interesting use of Greek plural endings in a foreign word); they are made with rice, ground beef, and fresh herbs. And lemon juice! A whole lemon’s worth. The resulting flavor is both sour, salty, and rich, and is a perfect party dish to accompany other finger foods.

I was first drawn to this dish because it’s a one-stop-macronutrient-shop; it’s equal parts carbs, protein, and fats, ending up in a deeply satisfying experience. The only break from the norm that I adapted in this recipe was to cook the rice in chicken broth instead of water, in order to increase its nutritional profile and tastiness.

Before we move on, let’s have the white rice talk again. As you may know, I find rice to be a perfectly healthy and Paleo-friendly food, since it is very low in toxins (compared to brown rice, and even some common Paleo foods, like coconut). Common questions I get: But what about its glycemic load? Basmati rice (like in this recipe) has a very low glycemic load even compared to other rices, and when paired with protein, fats, and acids, it’s further reduced, and significantly so. But what about arsenic? There are some studies that show there is arsenic in rice, but the amount of arsenic in rice is lower than the arsenic found in other foods (3x less than what’s found in drinking water, for example). But it’s nutritionally poor? Cook it in broth, like in this recipe!

Anyway, those are the most common rice questions I get – be sure to leave more in the comments below if you have any. At the end of the day, I think that white rice is a good thing to have on the table; it’s delicious, and if having a bit of rice as part of a meal helps keep cravings for other (unhealthier) foods at bay, go for it – provided you tolerate it well.