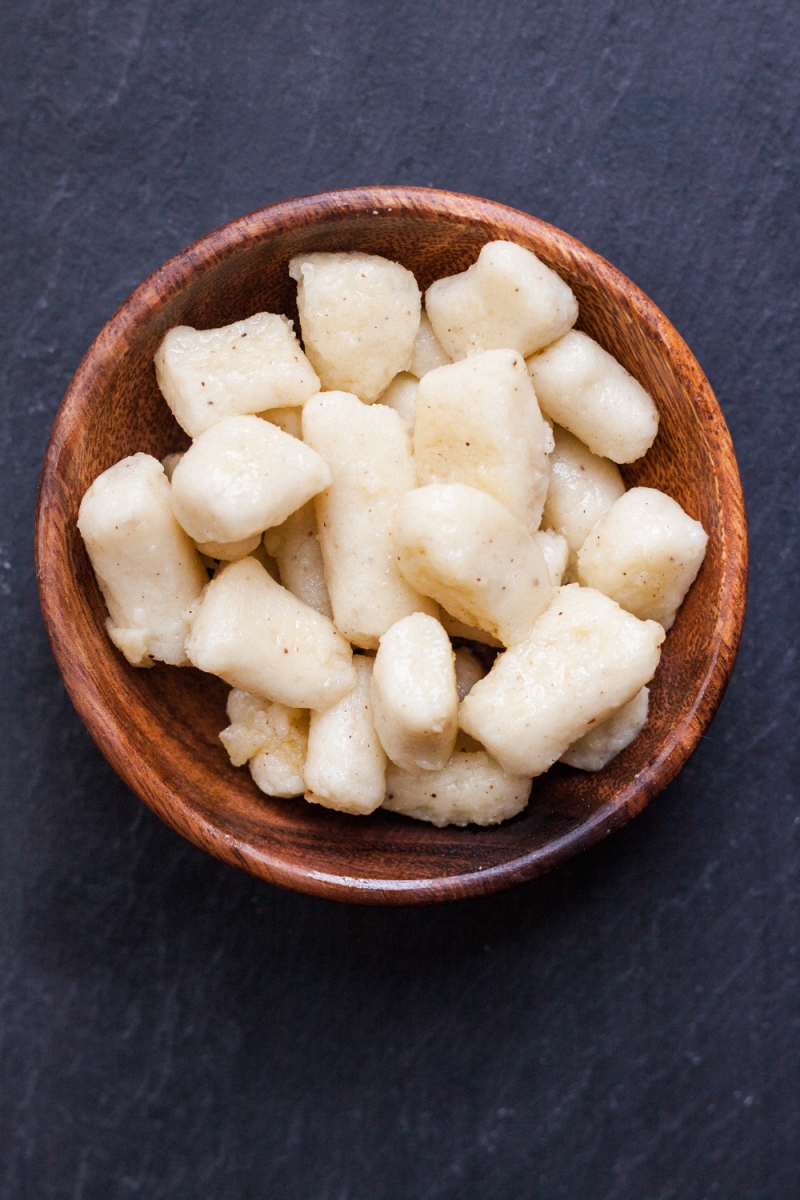 Gnocchi are a type of dumpling most often made with potatoes, and like many Italian dishes, there is a lot of variability to the dish. It’s commonly believed that gnocchi have been around since the Roman times, and that they actually came from the Middle East. It’s unclear whether the word gnocchi comes from nocchio (a knot in wood) or from nocca (knuckle). The addition of potatoes is relatively new, since they came over to Europe in the 15th century; semolina was widely used before then, and still used in some recipes today.

My version of the little dudes is very simple, and similar to many mass-produced variations of the dish. Sure, you could add all sorts of neat stuff like herbs or spinach, but I prefer to leave my gnocchi as a blank canvas for other tastes/sauces.

Step one: bake some potatoes. Wash them, poke some holes in them with a fork, rub them down with some olive oil, then sprinkle some kosher salt on them. Bake them for an hour at 350 and they should be good. Let them cool for about an hour before they’re ready, but you can take the peel off while they’re still hot.

Next, combine your rice flours. I found that the best consistency came from a combination of sweet rice flour (mochiko) and regular rice flour (joshinko). I should add that you can probably use coconut flour or almond flour and get a pretty good gnocchi as well.

Sprinkle a little of your flour mixture onto a large prep table, or in our case, the dining room table.

Using a potato ricer (a remnant of our baby-food-making days!), rice your peeled potatoes. You can use a cheese grater if you don’t have a potato ricer.

Make a well in the middle of your potatoes. Crack the eggs and put them in the well, then sprinkle the cheese, tapioca starch, nutmeg, salt, and while pepper around the ring of potatoes. With your fingertips, beat the eggs and then slowly mix them into the potatoes in a circular motion.

Add most of the rice flour as you mix everything together, again with just your fingertips.

Once everything is well-mixed, start kneading the dough until you have a nice looking little loaf. Keep adding rice flour as you knead until it has a dough-like consistency.

Divide the dough into six chunks (bet you’d never get to use a pastry scraper again, huh?), then roll each chunk into a nice rope. Cut the rope into small, gnocchi-sized gnocchi. Remember to sprinkle a little flour over everything if it starts to stick.

That’s it! You should now have a ton of gnocchi. Before making a ton of them, test a couple of them in boiling water – if they start to float and hold their shape, they’re perfect. If they fall apart before floating, add more flour.

For best results, place them on a baking sheet with some parchment paper and freeze overnight. Then you can put them in baggies and freeze them for up to six months.

To cook the gnocchi, drop them in some boiling, salted water, and fish them out when once they start floating. It should only take a couple of minutes. Next, drain them and toss them with whatever you’d like – butter, pesto, spaghetti sauce, your pick.

Update, April 2013: After making this a few more times, I’ve come to prefer adding a couple tbsp of tapioca starch to help the gnocchi bind better. I’ve updated the recipe to reflect this addition.