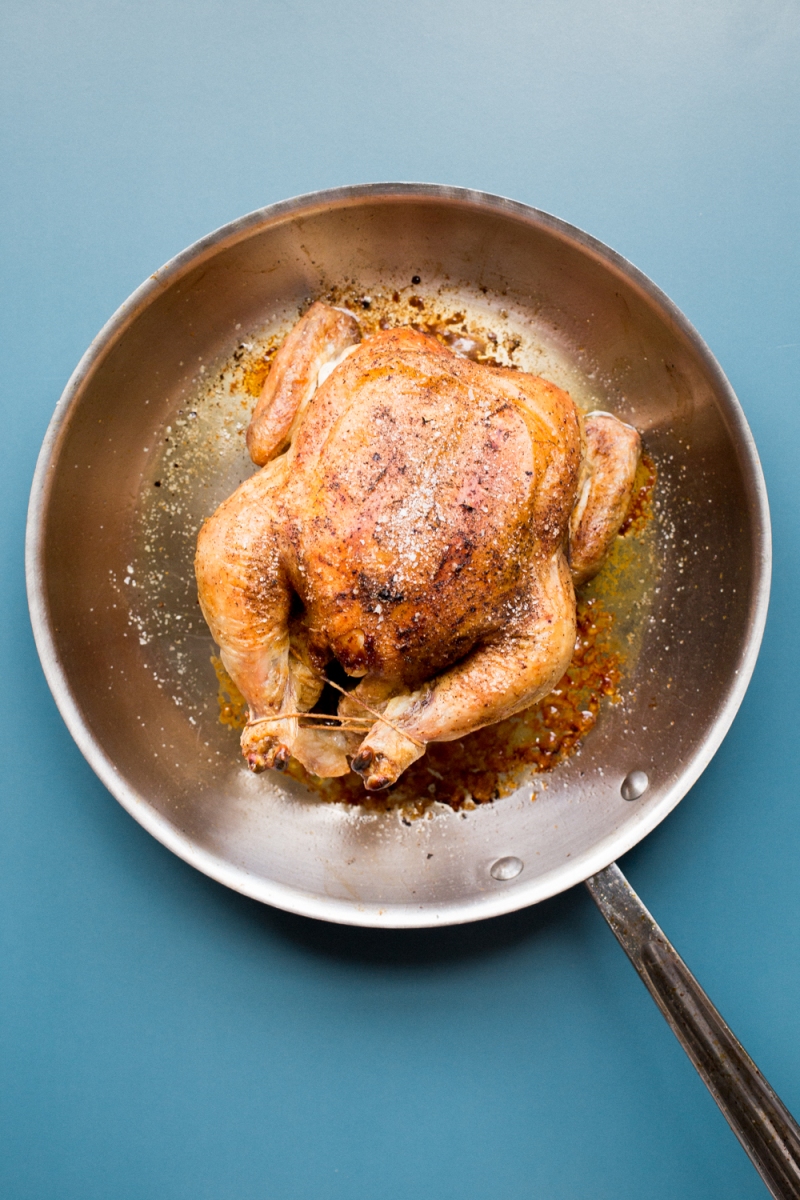 It’s hard to believe, but my cookbook, The Ancestral Table, has been out for nearly four months. I keep finding myself surprised whenever someone tells me they have and enjoy my book; for some reason I keep assuming that only our little family regularly uses it as a reference. So I thought it would be fun to take a week off from my regular recipes and share one from The Ancestral Table, as a gentle reminder to myself that there are other people out there who could use these recipes.

Deciding on a dish to share was really easy; we make this roasted chicken recipe at least once every two weeks. Simply put, it’s one of the easiest chicken recipes you’ll find, and it’s deliciously crispy and juicy. Cooking the bird directly in a skillet also makes it a cinch to whip the drippings into a flavorful gravy. Finally, we like to throw the bones and carcass into our electric pressure cooker for a couple hours to make some tasty and calcium-rich broth.

I’m also giving away a copy of my book this week, signed by me and Paul Jaminet (who wrote the foreword of my book). There are only a few copies like this one, so be sure to enter to win (instructions at the bottom of this post).

1. Pat the chicken dry inside and out with paper towels. Let the chicken set out for 1 hour to come to room temperature. Preheat the oven to 450F.

2. Combine the salt, pepper, and thyme. Season the inside of the chicken with 1/3 of the seasonings, then place the garlic, citrus peel, and bay leaf inside the chicken. Tuck the chicken’s wingtips behind the drumettes so that the tip meets the drummette joint that’s attached to the body.

4. Sprinkle the remaining seasonings on the outside of the chicken, then place the chicken breast side up in a stainless-steel or cast-iron skillet, or on a baking sheet. Roast until the breasts and thighs register 160F, 50-60 minutes. Remove the twine and let rest for 15 minutes before carving. (Here is a video I made several years ago on how to carve a chicken, using an old, soggier roasted chicken recipe.)

** Unlike many similar recipes, when cooking a chicken at a high heat, it is unnecessary to coat the chicken with butter or oil; the fat may lower the temperature of the chicken and interrupt the cooking process.

** Similarly, it’s better to add only a few small aromatics (in this case, a couple cloves of garlic and some lemon or orange peel) so as not to overstuff the chicken and further reduce its temperature. Adding an onion sounds like a good idea, but it’ll make for a soggy chicken.

** If you’d like to make a gravy to accompany the chicken, here’s how I throw it together. Scrape the drippings into a pan (if you roasted the chicken directly in a pan, you’re already there). Heat the pan over med/low heat, then add 1 tbsp butter. Once the butter is foaming, about 1 minute, add 1 tbsp of white rice flour (coconut flour will also work). Mix everything together into a paste, then let it toast for a couple minutes until slightly darkened, stirring often. Next pour in 1 cup of chicken broth and stir until thickened, adding more broth if it gets too thick. Once it’s reached your desired thickness, season it with salt and pepper to taste and serve.

For the picture at the top of this post, I used the whole chicken from my friends at Tendergrass Farms. I’ve recently been shooting product photos for their website, which really has been an excuse to cook with and sample their meats. Everything I’ve tried so far as been awesome.

Here is an illustration of how to tie the twine around the back end of the chicken, done by Alex Boake. Alex did all of the sketches found in my book, and she did a great job!

To enter the giveaway for a signed copy of my book, click here. The giveaway ends midnight, Monday June 9th, 2014. Open to US residents only. Good luck!

51 thoughts on “Easy Roasted Chicken (Recipe from The Ancestral Table)”