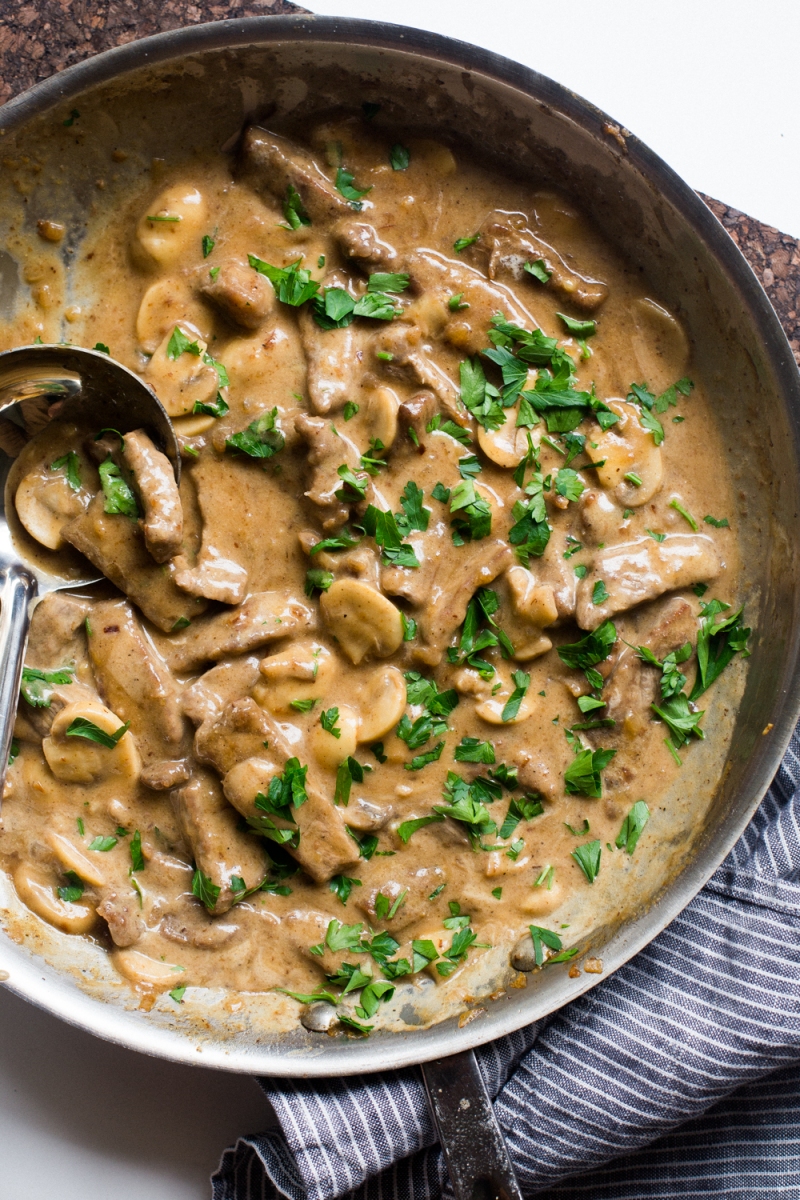 Beef Stroganoff is a dish of Russian origin, most likely named after the Stroganov family, whose last member died in 1923. Members of the Stroganov family were some of the most successful merchants and businessmen in the Russian empire from the 16th to 20th centuries (think of them as enduringly popular Kardashians, albeit with a bit less drama). It’s hard to say how long this dish has been around, but the most popular Russian cookbook from the early 20th century, A Gift to Young Housewives (Подарок Молодым Хозяйкам), contains one of the oldest recorded recipes in its 1907 printing.

This is a dish I first tackled nearly four years ago, but my old version never sat well with me – the sauce was too thin, and used a bit too much sour cream. So I set off to redevelop the recipe by keeping it fairly close to the original (putting my Russian translation skills to the test, see my notes below the recipe); at the same time, I kept the modern American interpretation of the dish in mind, which uses wine, mushrooms, and onions (in my case, shallots) to add some complexity to the dish. 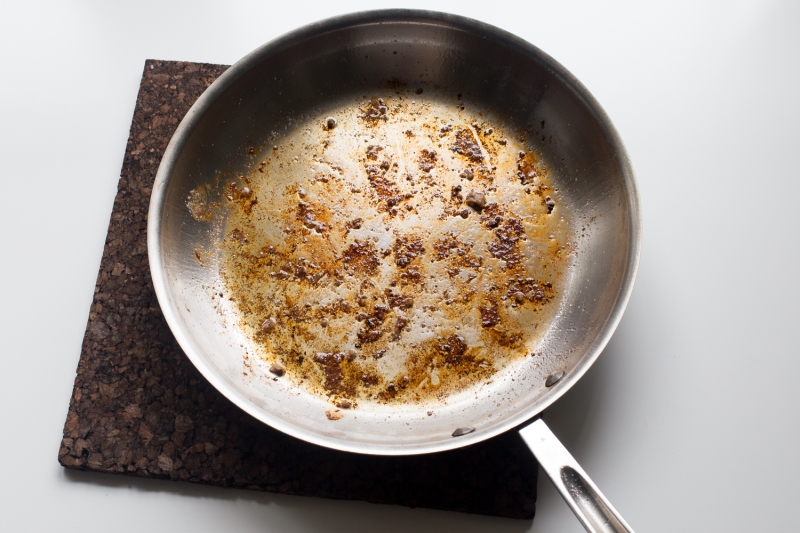 A stainless steel or cast iron skillet will work better than non-stick for this recipe; you want a develop a nice crust at the bottom of the skillet while browning the steak, as pictured above, which will be incorporated into the gravy once you add some liquid to the pan.

1. Pat the steak strips dry with paper towels, then season with salt and pepper and toss with 1 tbsp of the flour to give the pieces a light dusting.

2. Heat 2 tbsp of the ghee in a large skillet over medium-high heat until shimmering, about 2 minutes. Add the steak and pan-fry, in batches to avoid overcrowding the skillet, until each side develops a nice crust, about 2 minutes per side. Set the steak aside.

4. Add the ground mustard, ground allspice, and the remaining 1 tbsp of flour to the mixture, then toss until evenly distributed and aromatic, about 1 minute. Add the white wine and broth; stir and simmer until it starts to thicken, about 1 minute, then add the steak and any accumulated juices. Simmer until the steak is warmed and the sauce is about as thick as gravy, about 1 minute.

5. Remove from the heat and stir in the sour cream. Taste and add salt and pepper as needed, then garnish with chopped parsley and serve. Some folks serve it with rice, while others, especially in the US, serve it with egg noodles.

** A note on flours: I typically use rice flour to thicken my sauces, because I feel that it best mimics the texture of a wheat flour roux. For those who avoid rice (it’s a contested ingredient in the Paleo community), cassava flour or coconut flour will work fine. For the photos in this recipe, I used Otto’s cassava flour, which thickened nicely but has a gummier consistency than rice flour. Likewise, coconut flour is usually a bit grittier than rice flour, and will sometimes tend to clump (but won’t be gummy).

** If using butter instead of ghee, be sure to watch the butter so it doesn’t burn while browning the steak, and adjust the heat as needed; there is a fine line between delicious browned butter and bitter burnt butter. One option would be to mix the butter with an oil like olive oil or coconut oil when browning to prevent the milk solids from burning. Ghee doesn’t contain milk solids, so there is no danger of it burning.

Above is the original recipe, from 1907. It’s so old that it uses the pre-revolution Russian script (modern Russian was standardized in 1917). Beef Stroganoff has been modestly altered over the past 108 years; this original ingredients list includes cubed beef, allspice, butter, salt, pepper, flour, sour cream, mustard, and tomato paste.