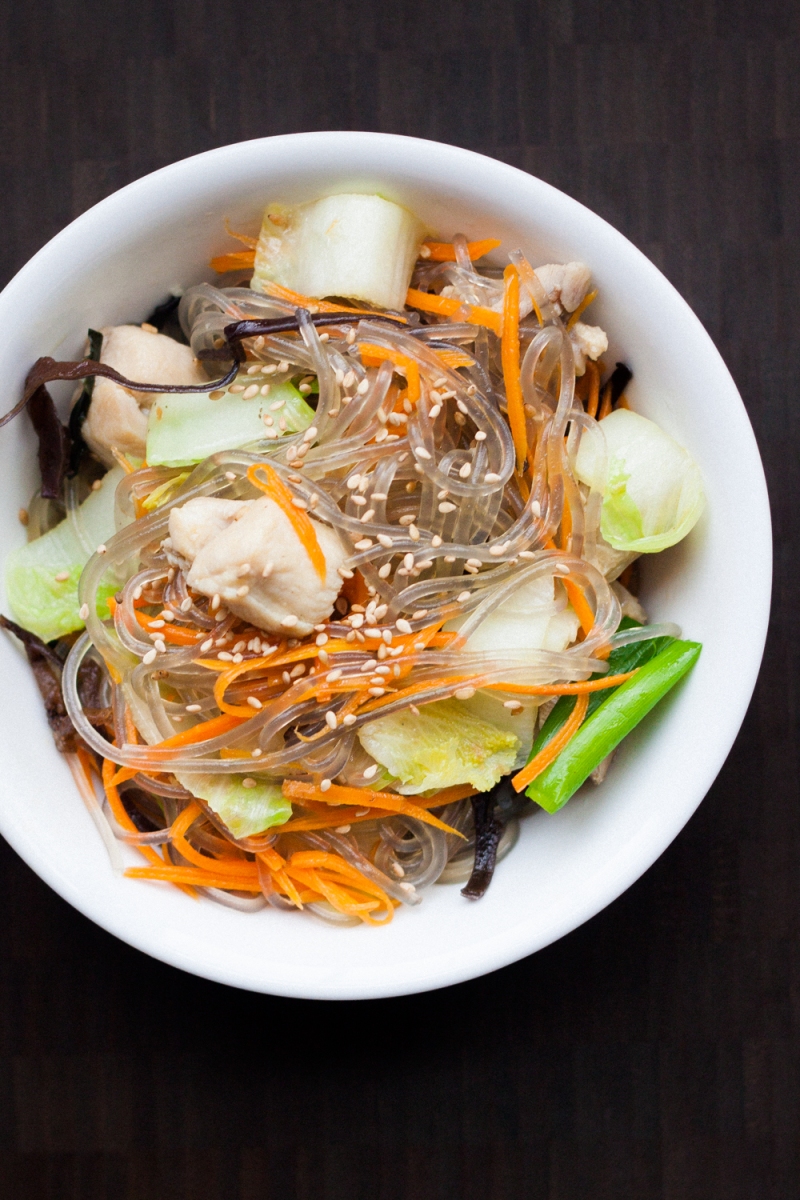 Today’s recipe is unique in that it’s basically a combination of two traditional dishes: Chicken Long Rice (Hawaiian) and Japchae (잡채, Korean). They’re both very similar, and in making either dish Paleo-friendly, they both just kinda mixed into this one dish you see above. Although it doesn’t have an official name, don’t worry: it tastes great!

Chicken Long Rice is a Hawaiian luau food that consists of chicken broth, mung bean starch noodles, chicken, and green onions. It was brought to the islands by Chinese immigrant workers in the 19th century, and is now integrated into Hawaiian cuisine.

Japchae is a Korean dish that is traced back to the 17th century, which traditionally was made with vegetables and mushrooms (Japchae literally means “a mixture of vegetables”), and sometimes with beef. Since the 20th century, sweet potato noodles (dangmyeon, 당면) have been a major part of the dish.

First things first, you need to soak your dried mushrooms in cold water for 30 minutes to rehydrate them. This dish is relatively quick to put together, so you should be able to cook everything else as the mushrooms are soaking.

Sweet potato noodles are somewhat hard to come by outside of Asian markets, but here’s an up-close shot of the dried noodles themselves, which are probably the most unappealing dried noodle around. Also, depending on the packaging, you may want to cut the noodles in half so that they’re not too long in the dish. Your call.

Cut the chicken into bite-sized pieces and set aside.

In a large skillet, bring the water and chicken broth to a simmer on medium heat, then add the chicken pieces, salt, and white pepper. Simmer, uncovered, until cooked through, about 15 minutes.

While the chicken is cooking, let’s prep your veggies and get the noodles cooked.

To get the noodles ready, simply boil them for five minutes in a pot of water, then drain and rinse with cold water. Add 1/2 tsp of sesame oil to the cold noodles to keep them from sticking together.

Add the cabbage and mushrooms, sautéing for another minute or so, then add the green onions and sauté for a few more seconds.

Now, add the sautéed veggies, noodles, wakame seaweed, togarashi, and coconut aminos to the skillet of cooked chicken/broth. Simmer everything together for a couple minutes, until the wakame seaweed has rehydrated. Add salt and pepper to taste (and togarashi if you’d like to make it a little spicier). Lastly, sprinkle the sesame seeds on top.