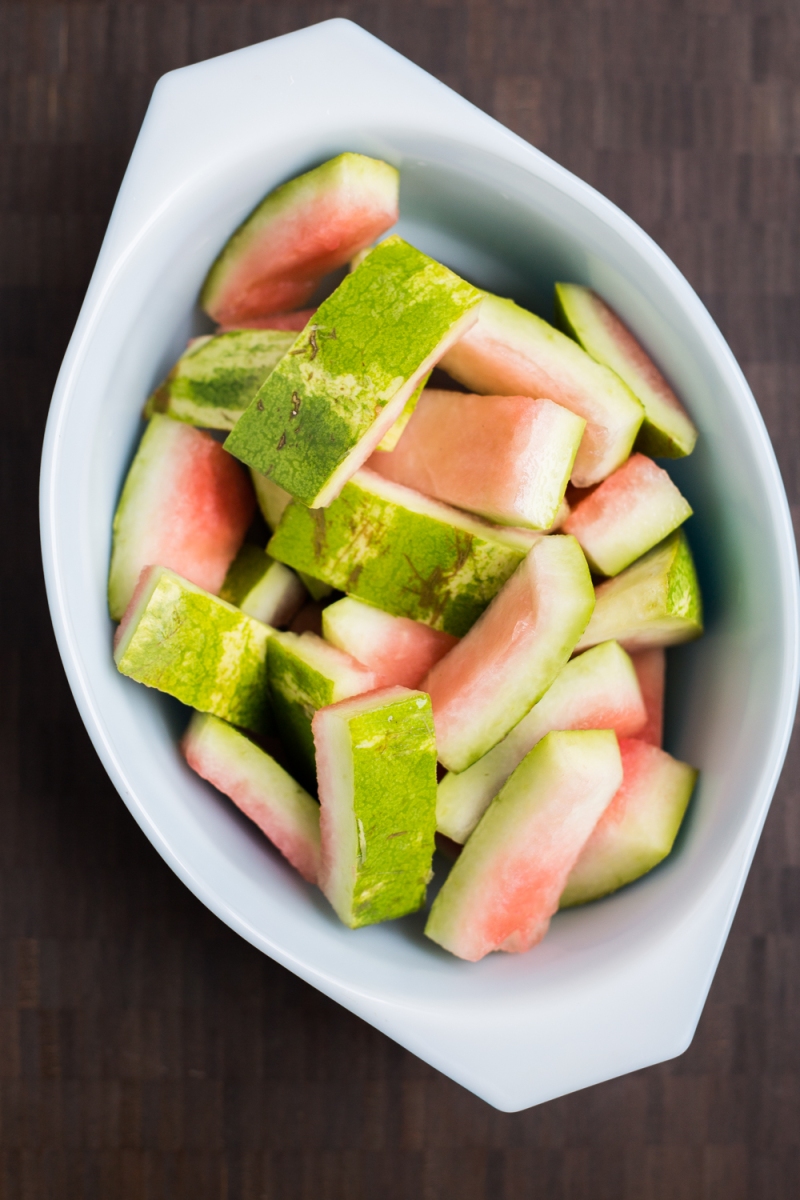 We eat watermelon a few times a year, and usually throw the rinds into the compost pile. I figure that’s what most people do. But a while back I ran across the idea of pickling the rinds, and I was immediately hooked on the concept; I love the idea of using a quick, simple pickling process to render something that’s usually inedible into a delicious, tangy, and crunchy treat.

It might sound a little weird at first glance, but watermelon pickles have been around for a while. While in Germany and Eastern Europe they tend to pickle the red flesh of watermelon, there are a few Scandinavian recipes that focus on pickling the rinds. In the US, there are records of people making pickles of watermelon rinds dating back to the Civil War; those original recipes call for soaking the rinds in a salt brine, then boiling with sugar, vinegar, cloves, and cinnamon until clear and soft, which turns it into something resembling a sweet relish. I went with a Scandinavian approach, but left a little of the flesh on the rind in order to add a little natural sweetness to the pickle and to aid in the fermentation process (bacteria likes sugar!).

For my own recipe I kept things simple with just a salt water brine and some garlic, but if you’re looking for a more “pickley” taste, adding mustard seeds and fresh dill will do the trick.

To get your brine ready, boil the water, remove it from heat, stir in the salt, and allow to cool to room temperature (should take about 30 minutes). As you wait for the brine to cool, cut up and peel the hard green part of the rind using a vegetable peeler.

Place the cut pieces of watermelon rind into a pint-sized jar along with the garlic cloves (and mustard seeds/dill if you’re using it).

Once the brine is cool, pour it into the jar until it’s near the lid. I like to put a small dish into the jar in order to push everything down and keep it submerged in water, but it’s not totally necessary for a short ferment like this one.

Store in a dark place (preferably pretty warm) for three days and taste it. I liked it at the three-day mark, but decided to give it a couple more days to see how the flavors developed. My instincts proved right – at the five-day mark the taste was much more complex and rewarding, with a tinge of sourness to it.

That’s it! After five days the watermelon will have taken on a yellowish hue and a slightly pickled taste, and will have softened enough to eat while keeping a nice crunch to it.

It should stay nice and crisp in the fridge for about three weeks.