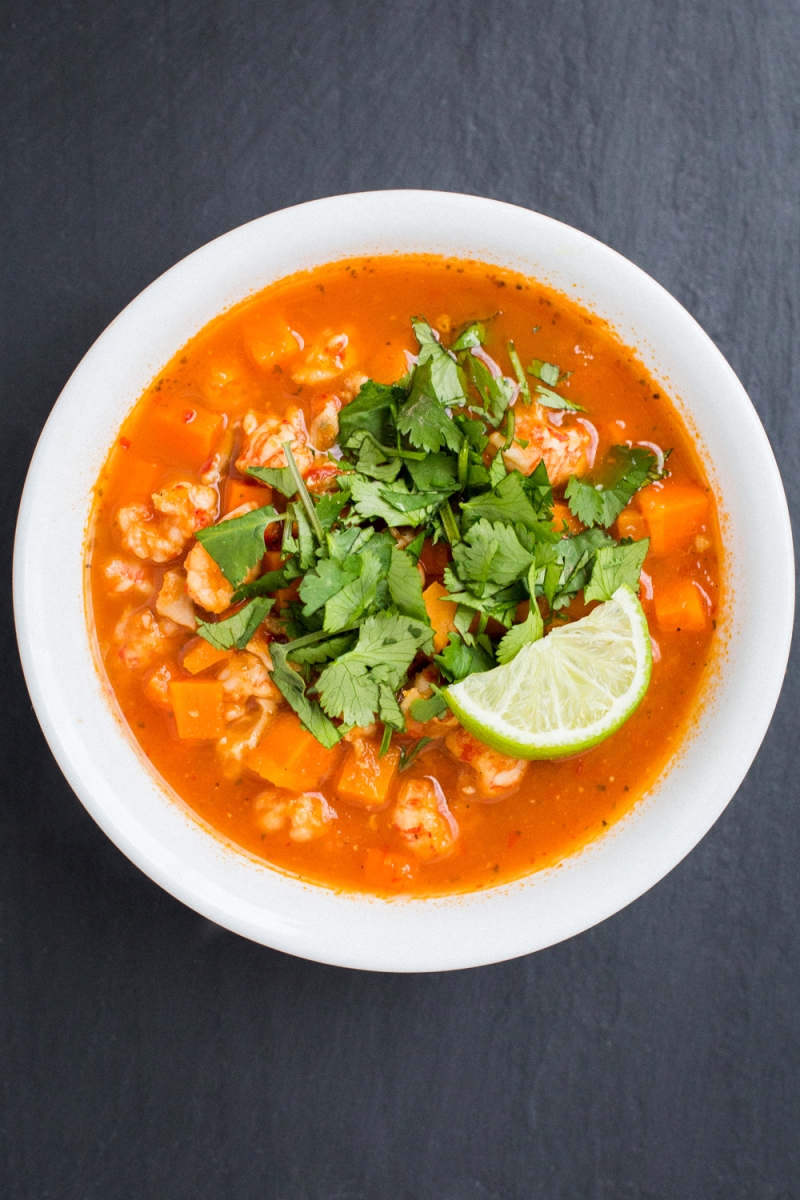 A few weeks back I did a guest recipe for Nom Nom Paleo, and I thought I’d share it here on my site for posterity’s sake.

Langostinos (Pleuroncodes Monodon, also called “squat lobsters”) are small, lobster-like crustaceans most often fished off the coast of Chile. They are found in abundance worldwide, but sadly, they are rarely caught for human consumption; instead, they’re used as feed in fisheries, mostly because they carry a certain pigment that helps color farm-raised salmon and trout. They have a sweet, shrimpy tasty to them and can be found for relatively cheap – so if you can get your hands on them, definitely give them a try.

This recipe in particular is modeled after a traditional Mexican soup, Caldo de Camarón, which is typically used with shrimp. If you don’t have any langostinos on hand, shrimp can be used with this recipe.

To start, soak your chiles in water for 30 minutes, then cut off the stems and remove the seeds. In a food processor, blend the chiles, onion, garlic, oregano, and canned tomatoes.

In a pot, warm 1 tsp olive oil on med/low heat for a minute or two, then add the puree. Simmer for six minutes, until aromatic, stirring constantly so that it doesn’t splatter everywhere.

Add the juice from the canned clams, 1 cup chicken broth, 2 cups water, and a bay leaf. Simmer for five minutes, allowing the flavors to marry.

In the meantime, get your langostinos ready and dice up the carrots.

Add the carrots and continue to simmer for five more minutes. Next, add the langostinos and clams, allow it to return to a simmer, then turn off the heat, cover, and let it sit for 10 minutes. This will allow the flavor to penetrate the seafood without overcooking it.

Prior to serving, add salt and pepper to taste. If you want to make it a little spicier, add red chili flakes or some hot sauce. Serve with chopped cilantro and lime wedges.

Turning Your Kids into Real-Food Foodies