I know what you’re thinking. “But Russ, it just turned October, and you’re already posting about Thanksgiving turkey!” While that’s true, there’s a simple explanation: if you want to celebrate Thanksgiving this year with a wholesome, happy, and pastured turkey, you’re going to need to contact a local farmer and pre-order it soon. As in, right away. So this recipe serves as both a reminder to pre-order a turkey soon, and a guide on what to do with the bird when you get it. I’ve been smoking chickens and turkeys for a while, but I’ve been lousy at sharing my results. So this is my definitive guide on how to get a great smoked turkey, using either a gas or charcoal grill. I love smoking turkeys because the flavor is awesome, but also because it frees up valuable oven space on what tends to be a hectic day.

The common turkey we eat today is a domesticated descendant of the wild turkeys originally found in North America. When Europeans first saw turkeys, they incorrectly thought they were a form of guineafowl, which was sometimes called “turkey fowl” because back in the day they were imported into Europe through Turkey. The name “turkey” stuck with this bird afterwards. Interestingly, many European countries (including France, Italy, Ukraine, Poland, and Russia) call the bird a derivative of “India” or “Indies” because of a similar confusion with guineafowl (which was also imported from India), or possibly because the New World was often thought to be part of Asia during the European Renaissance. 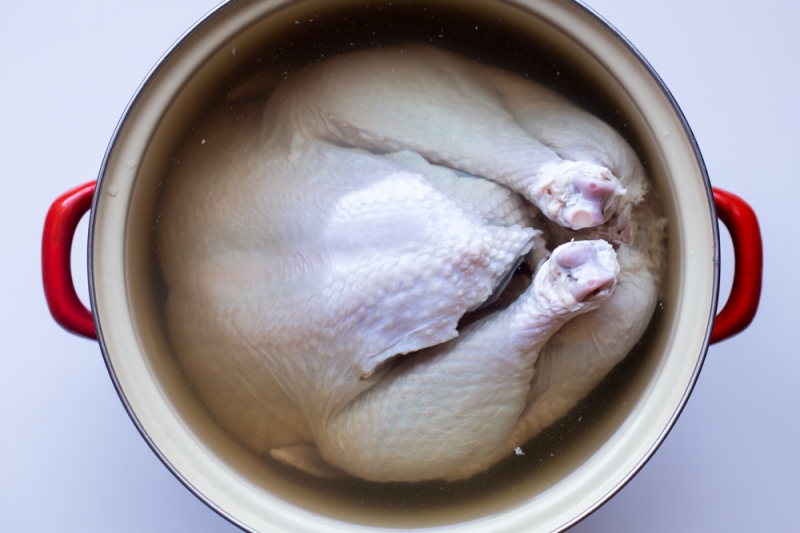 1. Turkeys should not be roasted or smoked directly in a roasting pan (or even on a rack in the roasting pan), and especially not be roasted while resting in liquid. This will result in a soggy chicken. My solution is to smoke the turkey directly on the grill grates, with a roasting pan filled with 1″ water underneath the grates, about 3-4 inches from the meat. This will keep the cooking environment moist but let the turkey get evenly crisp on the outside.

2. Turkeys should not be trussed. Dark meat tastes best at 175 degrees, and breast is best at 165 degrees; trussing means that the whole bird will reach the same temperature all around, which is not what we want.

3. Turkeys should be minimally stuffed, and only with aromatics, to ensure proper airflow and even heating.

4. Mild smoking woods (alder, apple, or cherry) are best with poultry; a little goes a long way. I use a combination of chunks and chips, which I’ll explain later.

5. Turkeys should be brined overnight, coated with fat only initially, and minimally seasoned. Brining keeps the turkey from drying out during the smoking process. Basting the turkey only results in soggy skin. Overly seasoning the skin just makes inedible skin – let the brine and aromatics add flavor.

6. Turkeys should not be carved from the carcass; the bird should be deconstructed and each piece can be carved individually.

Okay, let’s make the turkey. Pour 1 quart water into your largest stockpot, add the kosher salt and honey. Heat the stockpot on high heat and stir everything together with a wooden spoon until the salt and honey are dissolved. Remove from heat, pour in a bunch of ice and stir everything around until the ice melts and the water turns cold, or at least room temperature. Add the turkey to the stockpot and fill with cold water until the turkey is fully submerged in the brine. Cover the stockpot and put it in the fridge (or a cold basement, between 32-40 degrees) overnight, up to 12 hours.

The next day, remove the turkey from the brine and dry inside and out with paper towels. Place it on a wire rack on a baking sheet to air dry for 30 minutes. If you have room in the fridge for the baking sheet and turkey, great, otherwise you can leave it out at room temperature.

While the turkey dries, prepare your smoking woods. In two small aluminum pans, place one handful of wood chips and a few wood chunks. Fill the pan that has the chips with about 1/2″ of water. This will let the chunks catch fire and smoke first, and by the time the chunks are nearly done smoking, the water will have evaporated out of the wood chips pan and the chips will start smoking. So you’ll get constant smoking without having to add chips. I would either use a combination of alder and a fruit wood, or stick with one fruit wood; mixing fruit woods just seems a little weird to me.

If you’re using a charcoal grill, the setup will be similar, with your charcoal on one side, and the turkey and drip pan on the other. You’ll want to use only wood chunks, and add more chunks and charcoal about halfway through cooking (I’ll let you know when). 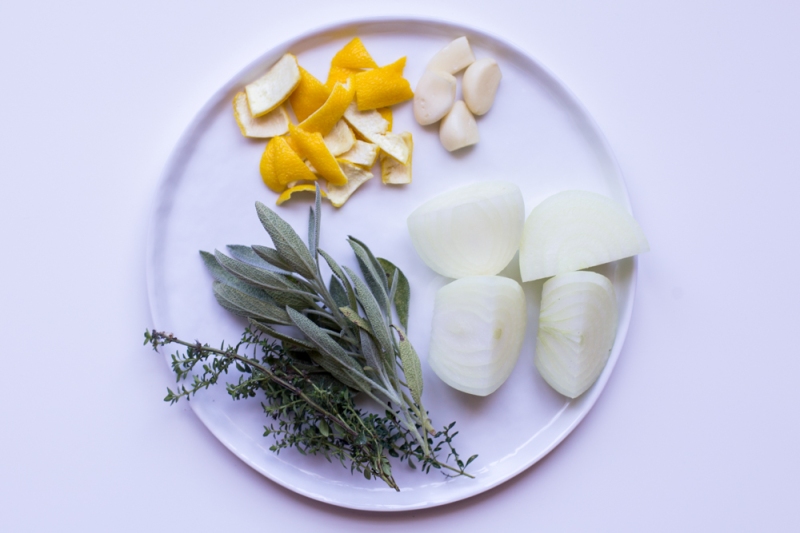 Prepare your aromatics for stuffing. Lemon or orange rind is better than actual fruit pieces, because you’ll get the aroma without the added liquid inside the bird, which can mess up your cooking times.

Once the turkey has air-dried, stuff it with the aromatics, making sure there is plenty of extra room. If it’s a tight squeeze, don’t use all of the onion.

Brush the turkey all over with melted ghee, starting with the underside of the turkey. It’ll start to harden as you brush it on, which is fine. Get every nook and cranny you can. Season all over with kosher salt and fresh-ground black pepper.

Heat your grill on high heat for 10 minutes, until the wood chunks start to smoke. Turn off all the burners but one, and leave the one on high. Adjust the heat as needed to get to a stable 325 degrees. Once the temperature is stable, put the turkey on the grill and cover each wing tip with tin foil. This helps to prevent the wing tips from overcooking too quickly. Cover and smoke for one hour. As it smokes, take the turkey neck and gizzard (not the liver) and about 10 peppercorns and simmer them in a quart of water on low, which we’ll use to make the gravy later.

After an hour, carefully pick up and rotate the turkey 180 degrees, so that its other side is now facing the hot side of the grill. Tilt the turkey towards its backside and drain out any collected liquid into the pan underneath it. Remove the tin foil from the wing tips. Cover and smoke for another 45 minutes. If you’re using a charcoal grill, this is a good time to add more charcoal or wood chunks if needed. 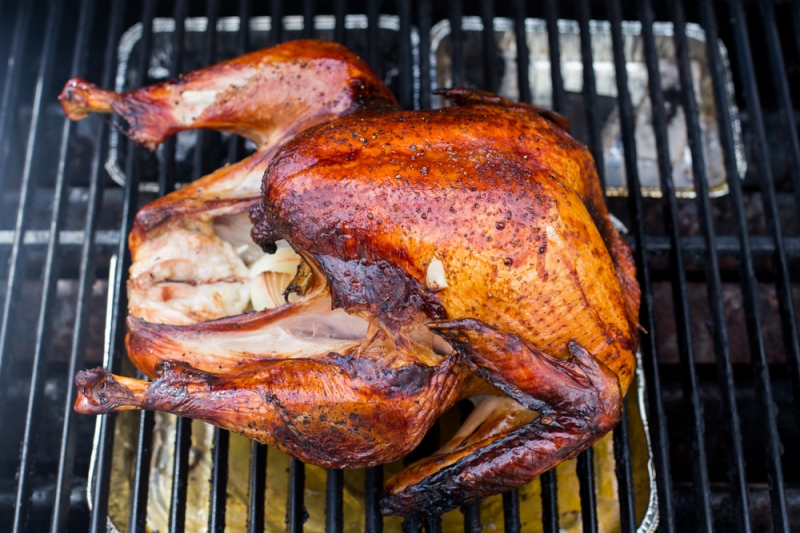 Open the grill and pour out any of the turkey’s collected liquid into the pan underneath it. Check the breast and thigh temperatures with an instant-read thermometer. You want the breasts to register 160F and the thighs to register 170F (they’ll climb another 5 degrees as the turkey rests). If it’s ready, pull it off the grill. If it’s not there yet, cover and continue to smoke, checking every 10-15 minutes. My 12-pound turkey took almost exactly 2 hours to cook.

Place the turkey on a wire rack over a baking sheet to rest for 20 minutes before carving. Don’t cover it with tin foil, unless you want soggy skin. Once your grill has cooled somewhat, carefully remove the grill grates and take out the drip pan. Pour the liquid into a fat separator, then pour the liquid (minus the fat, naturally) in with the turkey neck/gizzard broth. Fish out the neck, gizzard, and peppercorns and continue to keep warm on low heat.

To carve the turkey, remove each section individually – the breasts, thighs, drumsticks, wings, and drummettes. Then you can chop up the turkey as you see fit. I like to slice the breasts against the grain into 1/2″ slices, and shave the thigh meat from the thigh bone. Here is a video I made a few years ago where I carved a chicken in a similar fashion. Be sure take any extra breast meat scraps you can pull off the carcass and chop it up finely to put in the gravy broth.

To make the gravy, make a roux by melting 2 tbsp of butter in a sauce pan and stirring in 2 1/2 tbsp of rice flour (coconut flour is okay but a little gritty), then toast for a couple minutes until golden brown, stirring frequently. Stir the roux into the gravy broth and season with a pinch of thyme, and salt and pepper to taste. Simmer on med/low heat until thickened, about five minutes.