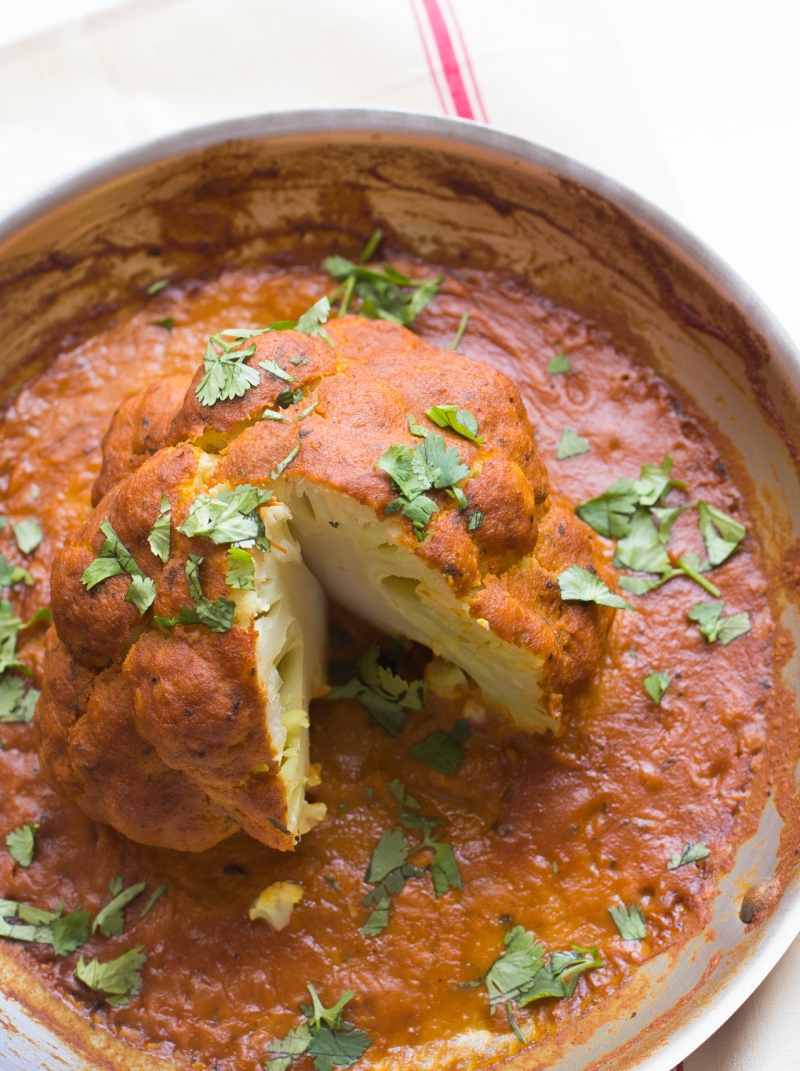 Gobhi Musallam is a roasted cauliflower dish from the Uttar Pradesh region of Northern India. While the origin of the dish itself is hard to trace, the origin of cauliflower isn’t. Cauliflower is a direct descendant of wild cabbage, and a close cousin to broccoli. Although it was known in Europe during the Middle Ages, it disappeared until sometime in the 17th Century, when Italy reintroduced it to the rest of Europe. Surprisingly, the Italians probably got cauliflower from the Middle East and Asia, who had likely acquired it from Europe during the Middle Ages. I think it’s pretty cool that cauliflower disappeared from its place of origin, only to be re-introduced by another culture.

We love this dish for several reasons. First of all, it’s an easy dish to put together: parboil the cauliflower, whip up a sauce, combine the two and roast in the oven. It’s a very impressive dish to serve to guests, and slicing/serving the cauliflower is a memorable experience. Lastly, and maybe most importantly, Gobhi Musallam is absolutely delicious and an interesting way to enjoy cauliflower.

First things first – soak your cashews for two hours before staring this recipe. Once they’ve soaked, prep your other ingredients, as you see above. The cashews aren’t 100% necessary for this dish, but they help to thicken the sauce and to add a creamy taste without using cream.

At first glance, Kashmiri red powder and fenugreek leaves (sometimes labeled as Kasuri Methi) appear exotic and excessive if you’re only buying them for this recipe. Instead, think of these two ingredients as investments: not only do I plan on using these ingredients in some recipes in the near future, they’re also featured in several recipes in my cookbook. And it never hurts to expand your spice rack, right?

Strain your cauliflower and set aside while you prep the sauce.

In a large skillet, heat the oil or ghee on medium heat until shimmering, about two minutes. Add the onion, chili pepper, and ginger and sauté until the onion softens, about 5 minutes.

Add the chopped tomatoes and simmer until the tomatoes soften, about 5 minutes.

Once the tomatoes are softened, blend everything with your soaked cashews and 1/2 cup of water until smooth. Add more water if the sauce gets too thick; you want it to be a thickness more like tomato soup than peanut butter.

Pssst…check out that beautiful blender. Be sure to check back on Thursday for a sweet giveaway I’ll be hosting!

Once you’ve blended your sauce, return it to the skillet and bring to a simmer on med/low heat. Cover and simmer until darkened, about 10 minutes, then stir in the second set of spices (garam masala, crushed fenugreek leaves), cover and simmer for another 5 minutes. Again, add water if the sauce gets too thick. During the last few minutes of simmering, pre-heat your oven to 400 degrees.

Garnish with cilantro, then slice and serve. Bet you never thought you’d have a good use for your pie server again, eh?