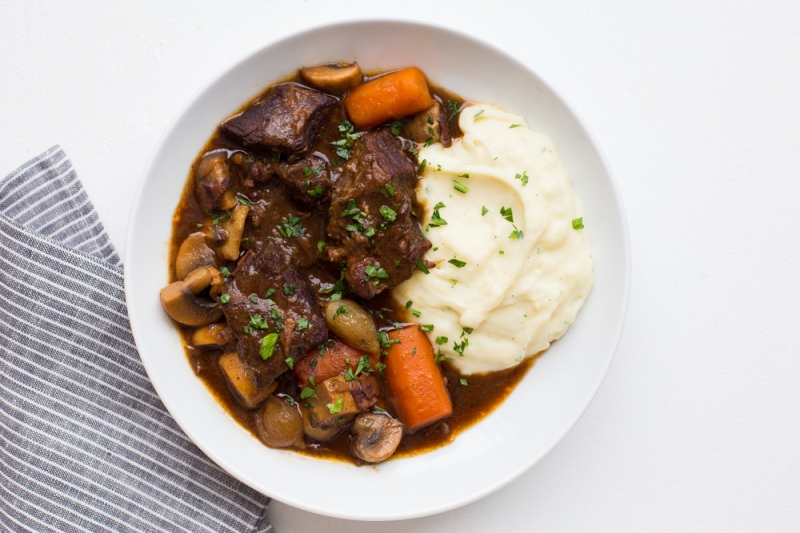 A couple weeks ago I did a guest post on RobbWolf.com, which was pretty exciting for me. I first heard of the Paleo diet through his book, The Paleo Solution, and considering how profound of an impact it made on my health, it was just surreal to join forces with him.

For my guest post, I deconstructed the entire history of one of my favorite dishes – Beef Bourguignon – including the individual histories of every ingredient used in the dish and the people who made it. It took a fair bit of research to put it all together, and I think it’s a very interesting read, though a little longer than my typical blog posts. For posterity’s sake, I decided to move the article to this blog in case you wanted to check it out. Enjoy! The link to my recipe is at the bottom of the post.

The recipe I’d like to share is a classic: Beef Bourguignon. This rich stew originates from the Burgundy region of Eastern France, an area renowned for its architecture, excellent wines, and its prized Charolais cattle. Beef Bourguignon was first mentioned in cookbooks in 1903, by chef Auguste Escoffier; it was later refined into the staple haute cuisine dish it’s generally regarded as today. Most people associate this dish with Julia Child, as her recipe in Mastering the Art of French Cooking is a timeless work of art.

It’s widely accepted that Beef Bourguignon started as a peasants’ recipe, possibly dating as far back as the Middle Ages (400-1400 A.D.), as a way to slow-cook tough, unwanted cuts of meat using ingredients they had on hand. From a Paleo perspective, the Middle Ages were not that long ago; assuming that humans may have been cooking their food as far back as 1.6 million years ago, the time from now to the Middle Ages is a drop in the bucket.

But let’s look at that phrase I used in the previous paragraph, on hand. How did these ingredients get there, in order to be on hand? It wasn’t that humans simply sprouted up in this region out of nowhere and had a bunch of carrots and onions around and started cooking them. While there is no arguing the fact that this recipe is a NAD (Neolithic Agent of Deliciousness), I think it’s important to acknowledge the fact that every dish and every ingredient has its own rich history, no matter its date of origin. This recipe, like all others, is a part of history itself – even prehistory. So let’s look at the true origin of Beef Bourguignon. And then we’ll cook it.

I should note that I mostly used The Cambridge World History of Food as a reference, as well as a whole lot of Googling—and I had a cubic ton of facts in my head from years gone by.

First, let’s consider when humans started to live in modern-day France. Early humans likely arrived in western Europe about 1.2 million years ago, and modern human artifacts have been found in Italy, dating back 43,000 years. While there were many occupants in France throughout prehistory and the early Neolithic, the Celts were the first recorded tribe in the Burgundy region, dating as far back as 1200 BC. It’s likely the Romans controlled the region starting around 100 BC. The Burgundians, Roman allies, migrated from East Germany and crossed the Rhine in 406 AD, settling in Burgundy thereafter (and giving the region its name). The Burgundians were conquered by the Franks in the 6th century and the rest is, well, history.

Now that we have an understanding of who lived there, let’s look at the ingredients used in Beef Bourguignon, and how they got there. In order of appearance in the recipe, we have: bacon, beef, onion, garlic, tomato paste, red wine, beef stock, parsley, thyme, bay leaves, butter, pearl onions, white mushrooms, carrots, salt, pepper, and potatoes. Each of these foods has a distinct origin, so let’s briefly explore them:

Bacon. Pigs were domesticated from the Eurasian wild boar, belonging to the Suidae family, which has roots as far back as 30 million years ago. Early archeological records date the domestication of boars to 8000 BC, in the Middle East. The mighty pig is the oldest known domesticated animal besides the dog; it was actually the first herded animal (not sheep or goats!). Cured pork was likely a survival food in the Middle Ages, honed into a craft in central Europe (Italy and Germany especially). The word “bacon” comes from Francis Bacon (1561-1626), whose family crest featured a pig.

Beef, broth, and butter. Humans have been eating bovines since prehistory; the famous Lascaux cave paintings in Southwestern France, dated back over 17,000 years ago, contains images of aurochs, the ancestor of domestic cattle. Remains of aurochs have been dated back to 2 million years ago, when it replaced its ancestor, the Bos acutifrons, which is part of the Bovid family, dating back as far as 23 million years ago. Broth is probably as old as the act of cooking, so let’s say about 1.5 million years or so. Butter from cow’s milk first appeared in Mesopotamia (modern Iraq and Syria) circa 2500 BC, but was not embraced by warmer Mediterranean climates since it spoiled quickly. Northern Europeans liked it, though, and they likely introduced it to modern-day France.

Onion, pearl onions, and garlic. Each of these plants falls under the genus Allium; the actual progenitor of onions is difficult to identify because its cultivars are sterile. Wild onions were likely consumed during prehistory, probably originally from present-day Iran, and were first cultivated around 7,000 years ago. Bronze Age (3500-1200 BC) settlements contain traces of onion. They are mentioned in the Old Testament and were cultivated in ancient Egypt; it was one of the staple foods given to the workers that built the Giza pyramids (circa 3000 BC), often eaten raw with bread. Pearl onions were cultivated much later, from leeks; same with garlic. Onions (and likely garlic) were brought to France by the Romans.

Tomato paste. Tomatoes have been traced to the South American Andes, but their exact origin is impossible to pinpoint. Tomatoes were domesticated as early as 500 BC in Mexico, and were originally as small as cherry tomatoes and were likely yellow. After the discovery of the New World, they were brought to Europe, but Europeans falsely thought they were poisonous (although the leaves are!), and the fruit wasn’t popular until hundreds of years later due to this confusion. Tomato paste (boiled and concentrated tomato sauce) was most definitely not in the original Beef Bourguignon, but is common in modern versions of the dish.

Red Wine. Grapes first came from present-day Georgia, and evidence of wine-stained pottery has been dated to around 6000 BC. Wine was introduced to Europe through the Phoenicians in the 8th century BC, and was embraced by the Greeks and then the Romans. The adoption of wine into the Roman Catholic Church brought wine to France via monks, who were France’s first winemakers.

Herbs and spices: parsley, thyme, and bay leaves. Parsley is native to southern Europe, dating back to at least the ancient Greeks. Thyme was also of Mediterranean origin, probably used as a medicine before food. Bay leaves are the leaves of the bay laurel tree, a small evergreen native to Asia Minor which was later brought to the rest of the Mediterranean, although the exact date is unknown. All of these herbs were used in ancient Greece and were brought to France by the Romans.

White (button) mushrooms. Mushrooms are actually the fruit of a network of underground stems. Mushrooms were most certainly eaten by hunter-gatherers, as puffball remains have been found in Paleolithic settlements. White mushrooms are one of 1,800 edible fungi, and were first cultivated in France in the 1700s.

Carrots. The wild ancestors of carrots came from central Asia; their roots were originally bitter and the plants were originally grown for their leaves (carrots are actually related to parsley). Carrot seeds were found in central Europe dating as far back as 3000 BC. Selective breeding of the plant resulted in sweet roots, and the modern carrot emerged from there, although in various colors (the Dutch first made the orange carrot, in the 1600s). Carrots were cultivated by the Greeks and Romans, who – again – brought them to France.

Salt and pepper. Salt is an ancient food, and evidence suggests it’s been a major influencer of mankind’s development since prehistory. Salt works have been traced as far back as 6000 BC. Black pepper is the cooked and dried fruit of the flowering vine of the black pepper plant. Originally from south India, it was discovered in Egypt as far back as 1200 BC, although how it got there from Asia is unknown. Pepper was used in Greece as far back as 300 BC. Trade between Asia and the Romans was common, and the Romans likely brought pepper to France, as well.

Potatoes. Also originally from the Americas, potatoes have been traced back to modern Peru, first domesticated as far back as 10,000 years ago. Selective breeding as far back as 5,000 years ago produced the many types we know today. They were brought back to Spain by explorers in 1539, and were brought to the British Isles by Francis Drake in 1586, and probably reached France via England. Potatoes are a common accompaniment to Beef Bourguignon, but were not an original ingredient in the dish.

Phew. Okay, so that was the true origin of Beef Bourguignon, or at least the items that constitute this dish. These ingredients didn’t just happen, and none of them are truly native to the region; someone had to bring each and every one of them to France.

The point of this little excursion through history is to recognize that while some foods are indeed products of the Neolithic, and not foods consumed in the Paleolithic, they’re still old and steeped in a rich history of their own. Think of the hundreds, even thousands, of expeditions, trades, and advances in technology required to make something as simple as this beef stew.

It’s easy to dismiss modern ingredients as a Neolithic invention, too sweet and nutrient-replete for caveman standards. But the simpler truth is that they’re a far cry from true modern foods like Twinkies and Dippin’ Dots (although technically the latter is a product of the future). And even better is the fact that this dish, like many dishes that date back only as far back as a few generations, are much more aligned with a Paleo diet in terms of nutrient density and macronutrient ratio than anything you can find at your local chain restaurant.

So my challenge to you is this: instead of worrying about what our Paleolithic ancestors were eating, simply look back at traditional and international recipes from just a couple hundred years ago. These traditional recipes – perfected over time for maximum tastiness, might I add – are often inherently nourishing and a pleasure to eat. Be sure to make minor adjustments based on our modern understanding of nutrition; for example, many Beef Bourguignon recipes call for using wheat flour as a thickener, which I omitted (although I sometimes use white rice flour instead).

I hope you have a good time sifting through the pages of food history to find delicious feasts. Beef Bourguignon is just the beginning.

The Ancestral Table and the Autoimmune Protocol