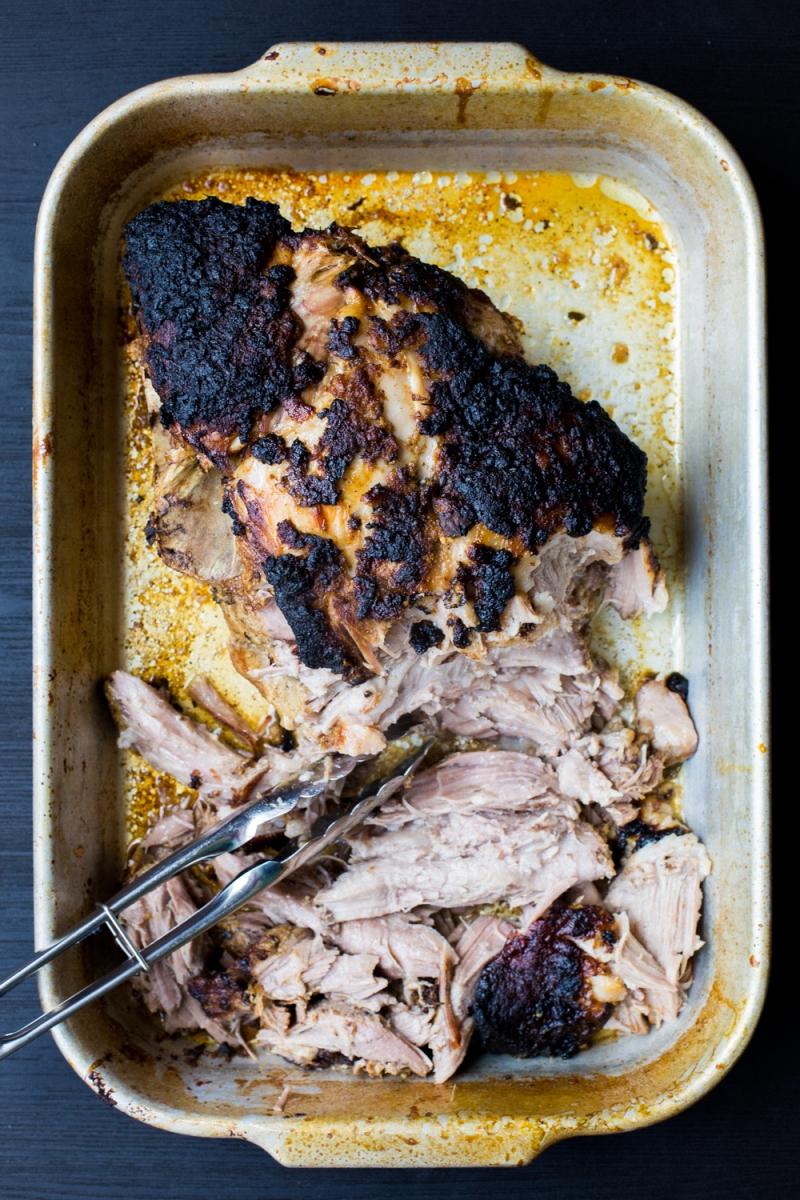 Lately I’ve been in the mood to catch up on all of the recipes that didn’t quite make it into The Ancestral Table. Like last week’s Chicken Tikka Masala, I had initially considered putting Pernil in my book. But once I put everything together and realized that there were already two pulled pork shoulder recipes in there (Kalua Pig and BBQ Pulled Pork), plus a Puerto Rican roast pork (Lechon Asado), I knew that it would be more appropriate to put my Pernil recipe here on the blog.

Pernil is a roasted pork shoulder popular in Puerto Rico, often served during holidays. It is derived from the Spanish word pierno (leg), likely because it was originally made with the hind end, but since most hind quarters are used to make ham nowadays it makes sense that the cheaper shoulder is the cut of choice today. One particular trait of Pernil is the use of an adobo mojado, or wet marinade, which is created by using bitter orange juice (I used orange and lime juices) and a little vinegar to add moisture and tenderize the meat.

Although roasting a pork shoulder in the oven would be considered cheating here in the US, Pernil is surprisingly roasted in an oven on an almost exclusive basis. I can see why, since oven-roasting makes this dish dead-simple to make. I did add a smidge of liquid smoke to boost the roast’s flavor, but otherwise I kept the recipe true to what I found in most Puerto Rican cookbooks.

1. Using a sharp knife, make 1/2″ deep cuts all over the pork shoulder. Combine the marinade ingredients, then add the marinade and pork to a resealable plastic bag. Marinate overnight.

2. Preheat your oven to 450F. Place the shoulder in a roasting pan, along with the marinade. Add more water around the pork if needed – you’re looking for at least 1/2″ of liquid in the pan. Place in the oven, uncovered, and roast for one hour.

3. Remove the pork from the oven and baste with the marinade liquid. Cover with heavy duty tin foil, reduce the oven heat to 250F and roast until its internal temperature reaches 190F, about 6-8 hours. Remove from the oven, and allow to rest (with the tin foil covering it) for 30 minutes. Pour out the liquid and set aside, then shred with tongs or some forks, adding in about half of the liquid to moisten the meat.

** I recommend using a quick-read thermometer or a remote thermometer to best observe the pork’s internal temperature.

The juices and sweetener (coconut palm sugar or honey) will cause the roast to brown during the initial high-heat stage, similar to the “bark” you get when making BBQ pulled pork in a smoker. 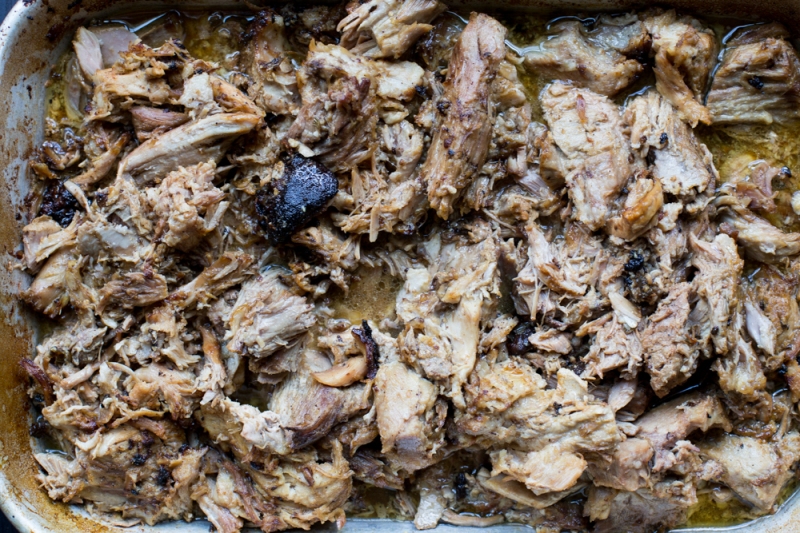 I know, it’s not the prettiest, but man is it tasty. Serve it with rice or plantains.