Let me start this post by acknowledging that this recipe title is a second-order misnomer. You see, combining the words “muffuletta” and “wedge salad”, at face value, is just preposterous. For those of you who know their Sicilian bread history, muffuletta is a large, round, and sturdy bread not unlike focaccia. It was brought to the United States by Italian immigrants, who created a sandwich that bears this same name.

The story goes that Italian-Americans living in New Orleans tired of having to manage a whole plate of pickled vegetables, meat, cheese, and muffuletta bread, so they started throwing it all together for the sake of convenience, and the muffuletta sandwich was born. Today, the signature traits of this sandwich include an olive salad (sometimes mixed with chopped giardiniera pickled vegetables like carrots and cauliflower) and layers of Italian ham, salami, and provolone cheese. Some versions include other meats, like mortadella (similar to bologna), or other cheeses like mozzarella.

So for today’s recipe, not only am I not sharing a bread recipe, I’m also not sharing a sandwich recipe (hence the second-order misnomer). Instead, I wanted to combine the rich and potent flavors of the muffuletta sandwich with the unmistakable crispness and convenience of a wedge salad. After all, what could be easier than making a salad that only requires minimal chopping? Another added bonus of this method: the olive oil used to flavor the olive salad doubles as a salad dressing, making this recipe a simple, two-step process. Sure, it’s not as convenient as a one-handed sandwich, but still – pretty convenient.

Coincidentally, I’m making my first trip to Sicily in a couple weeks, so I’ll be sure to keep an eye out for muffuletta bread while there. 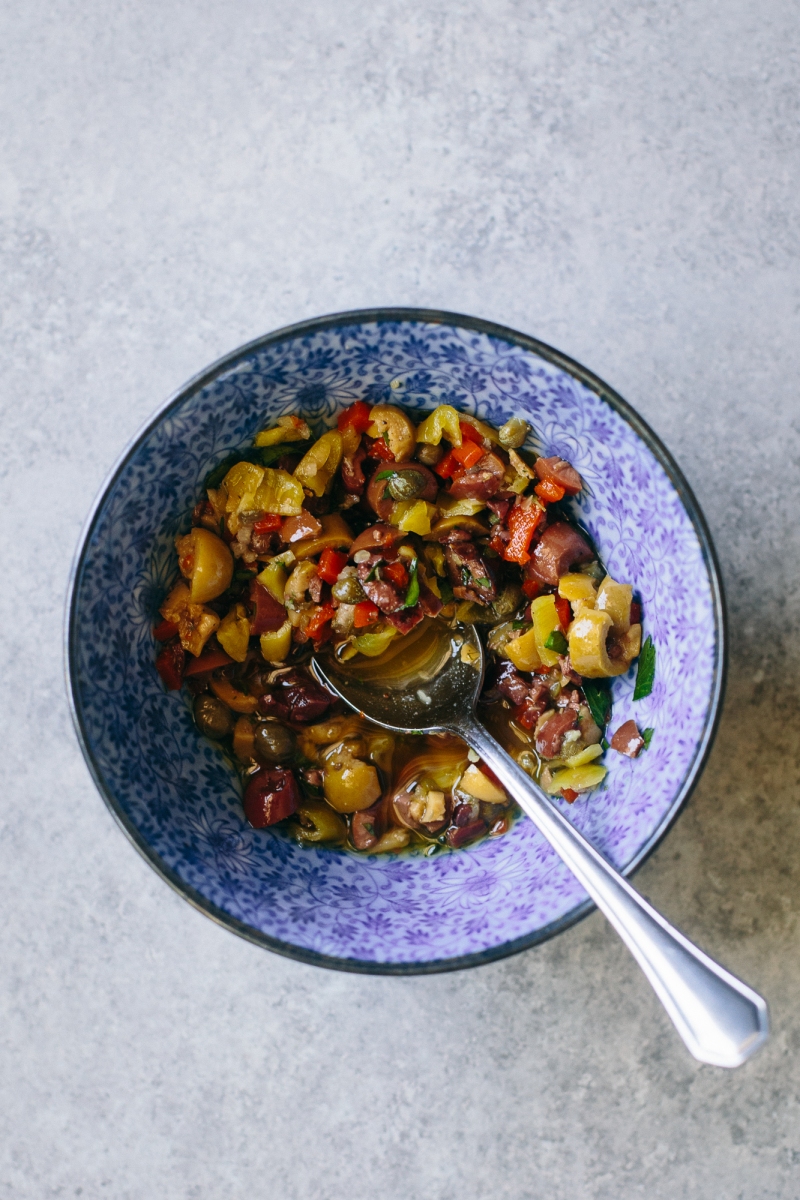 1. On a cutting board, combine the olives, peppers, capers, parsley, and oregano; chop into small, uniform pieces. In a small bowl, combine the chopped pieces and the garlic and anchovy paste; stir in enough oil so that the oil just covers the ingredients, about 1/2 cup. Season with salt and pepper to taste, then set the Olive Salad aside for one hour to allow the flavors to marry.

2. Place the lettuce wedges on individual plates, then distribute the meats and cheese over the wedges; top with the Olive Salad and spoon some of the extra olive oil from the Olive Salad as a finishing dressing. Garnish with crushed black pepper and serve.

** Pro-tip: use pimento-stuffed green olives to knock out both ingredients at once!