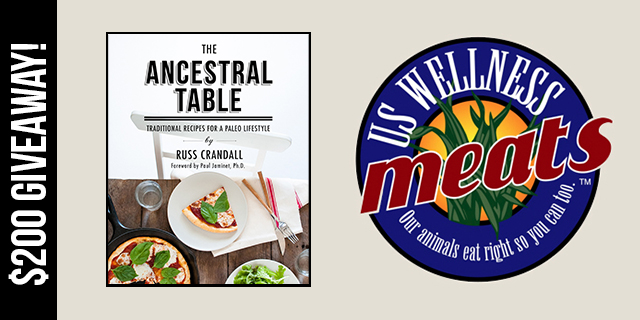 People say nice things about companies all the time, and I’m always leery of endorsements. After all, companies are just big, hulking, impersonal machines, right? While it’s probably easy or convenient to say that The Ancestral Table is solely the result of my own hard work over the years, the truth is that my cookbook wouldn’t have been possible without the support of many people, chief among them my friends at US Wellness Meats. I realize that sounds a little extreme, so hear me out.

Two years ago, I sent them an email asking if they were interested in partnering for some recipes. This was my first time putting myself (and this blog) out there like that, and I felt sheepish writing such an assuming email – after all, at the time I had only a few hundred Facebook “likes” and a regular readership of around 50 people. But the USWM team saw something they liked in my little site, and sent me a box of various meats to work with; they also added me as their April 2012 Featured Chef, and my website took off from there. I attribute the turning point of this blog – from something I was writing for mostly myself to what it is today – to their support in early 2012.

Honey and Citrus Glazed Ham, the first recipe I created using a USWM product. This recipe was later featured in People Magazine.

But their support didn’t end there. Since then, US Wellness Meats has been regularly donating food items for me to use in blog recipes, and last summer, they graciously donated the bacon I used in my Baconpalooza win. And perhaps most importantly, they donated nearly every meat you see featured in my cookbook. That might not sound like much, but they helped mitigate some out-of-pocket expenses this past year while writing The Ancestral Table (hint: writing a cookbook with zero advance is difficult). And since we (obviously) eat all of the foods they send, they help provide nourishing, delicious foods for our family.

To celebrate the debut of my cookbook, US Wellness Meats is giving away a $200 gift card to their online store. While I think it’d be great to buy anything you’d like, I think it’d be really fun to use the gift card to buy some of the exact items I used when photographing the cookbook. Especially if you plan on cooking through the book. Here’s a list of items, which total almost exactly $200:

To enter the giveaway, click here to enter via Rafflecopter. The giveaway ends midnight (EST), February 15th 2014, and I will pick a winner on February 16th. Giveaway limited to US residents. Good luck!

Early Praise for The Ancestral Table