This past weekend I competed in a bacon cook-off fundraiser, entitled Baconpalooza, which was hosted by the Farm-to-Consumer Legal Defense Fund. The contest was part of an entire weekend of events, which included a tour of Joel Salatin’s Polyface Farm and nutrition talks and cooking demos by Robb Wolf and Jenny McGruther. My competition was very stiff during the cook-off, with many imaginative and delicious entries trying to woo the sold-out crowd of 250 voters.

I’m happy to say that I was the winner of the cook-off! I thought it would be neat to share the recipe of my winning dish so you can recreate it at home.

The ingredients in this dish are variable, and depend on the size of bacon piece you get. I would recommend something that’s at least a pound, and fairly thick. The bacon we used in the competition was graciously provided by US Wellness Meats and Red Apron Butchery, but any local butcher should be able to provide you with a nice chunk of uncut bacon.

Place the bacon in a dutch oven or roasting pan, then pour in enough apple cider to almost cover the bacon, then add a few splashes of bourbon. I used a ratio of around 1/10 bourbon, 9/10 apple cider – it’s not an exact science. Sprinkle in some peppercorns and add a couple bay leaves. Again, the amount varies.

Cover tightly (use a couple layers of tinfoil if you don’t have a heavy lid for your dish) then roast in the oven at 350 degrees for four hours. Take out the dish, uncover, and let cool in the liquid until it reaches room temperature, about an hour. Once it’s cool, put it in a ziploc bag and refrigerate overnight so that it’ll firm up. The bacon will keep for a month in the fridge.

When you want to eat it, slice it into thick slices, or into cubes like you see above, then sear for about a minute on each side on high heat. That’s basically it – the bacon will melt in your mouth at that point.

The bacon has such an intense flavor that I realized we needed to add accompaniments to complement and accent the strong flavor. For the cook-off we paired the bacon with a parsnip purée, beet chips, and some baby arugula tossed with Tessemae’s Lemonette dressing and fresh lemon juice. To make the parsnip purée, we just boiled some peeled and chopped parsnips until they were fork tender, about 40 minutes. Then we strained them and ran them through a food processor until smooth, and mashed in some grass-fed butter and salt to taste. We fried our beet chips in lard at 350 degrees, then lightly salted them while they drained on some paper towels. 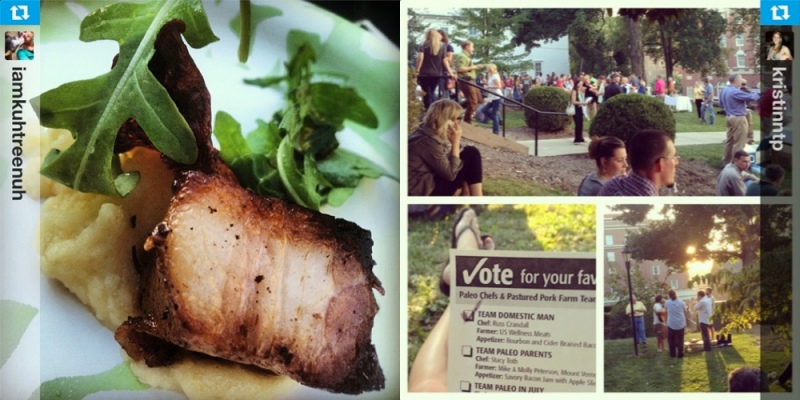 The Team: my wife Janey, me, and our friend Giang

Overall, it was a really fun night, and I had a great time serving people and seeing their reactions when they tried the bacon. I also enjoyed the friendly ribbing between competitors; at the end of the day, it was great to see all the home chefs come out and show off their talents. Be sure to check out the list of other dishes that were presented – everything was really delicious!

** Note that this recipe calls for uncut bacon, and not pork belly. Your best bet for getting uncut bacon would be to go directly to a butcher. If you make this dish with pork belly, it’ll lack the flavor that comes from braising the cured/smoked bacon; adding about 1 tsp salt and 1/2 tsp liquid smoke will help it along, though.

Thanks to Molly M. Peterson for taking some of the pictures in this post!