Sauerbraten (“Sour Roast”) is a German pickled roast. Traditionally made with lean horse meat, this dish works well with any lean roast. For my recipe in particular I used eye of round roast. This dish is unique in that the meat is tenderized in a wine or vinegar marinade for several days, probably a carryover from ancient preservation methods.

To counter the sour taste of the meat, Germans today commonly add gingersnap cookies to the roast’s gravy; personally, I used a bit of honey and golden raisins to cut its sourness, a custom found in Rheinischer Sauerbraten (Sauerbraten from the Rhine region in West Germany).

The eye of round roast for this recipe was graciously donated by Friends & Farms, a Maryland-based community that provides high-quality food baskets from local farms and artisans. They build the baskets with certain recipes in mind, and provide the recipes each week; each basket is designed to complement your eating habits, and is enough food for about three meals per week. You can also customize your baskets for a more Paleo-minded lifestyle, which is really cool.

Better yet, they are giving away a free weekly food basket to one of my readers – if you’re in the greater Baltimore area, click here to enter the giveaway via Rafflecopter. The giveaway ends ends midnight (EST) Saturday, Feb 22nd, 2014 and is limited to Maryland-area residents; you’ll need to be able to pick up your winnings at one of their many pickup locations. Good luck!

1. Rub the kosher salt all over the eye of round roast, and set aside. In a pot, bring the rest of the brine ingredients to boil, then remove from heat and set aside to cool to room temperature, about 30 minutes. In a non-reactive pot or bowl, place the roast and pour the brine over the roast. Cover and brine for at least 3 days but up to 5 days. If the meat isn’t fully covered turn the meat twice a day (morning and evening).

2. After it has brined, remove the roast from the brine and pat dry. Reserve the brine – veggies, spices, and all. Warm a Dutch/French oven over med/low heat then add the sliced bacon and cook until crispy and most of the fat has rendered out; with a slotted spoon, remove the bacon and set aside (you won’t need it for several hours, so but sure to put it in an air-tight container to keep from getting stale). You should have about 1 tbsp of rendered fat in the dutch oven; if not, add some lard or coconut oil.

3. Increase the heat to medium and allow to come to temperature, about 1 minute, then add the roast and brown it on each side, about 3 minutes per side, for a total of about 12 minutes. Remove the roast and set aside. Reduce the heat to low and add the sliced onion. Sauté until mostly caramelized, about 25 minutes. Caramelizing the onions will help bring out their sweetness and will help cut down on the vinegary brine’s taste.

4. As the onions cook, preheat your oven to 325F. Once the onions have caramelized, return the roast to the pot, along with all of the veggies and spices from the brine (fish them out with a slotted spoon). Pour in enough of the brine liquid to reach halfway up the roast (for me, it was all but 1/2 cup of the brine). Add the piece of ginger and 1/4 cup of the golden raisins. Increase the heat to medium and bring to a simmer, then cover and put in the oven. Roast until tender, about 3-4 hours.

5. Once the roast is tender, set it on a cutting board to rest for 10 minutes before slicing. As it rests, let’s prep your gravy. Strain the braising liquid in a saucepan, discarding the solids. Bring the saucepan to a simmer on med/low, then add the honey. Add salt and pepper to taste, and more honey if it’s too sour; the gravy should be somewhat sour, but not overwhelmingly so. It’ll smell more sour than it tastes.

6. Slice the roast then garnish with the cooked bacon and the remaining 1/4 cup golden raisins, the pour the gravy over the roast. Finally, garnish with fresh parsley and serve with red cabbage and boiled potatoes. 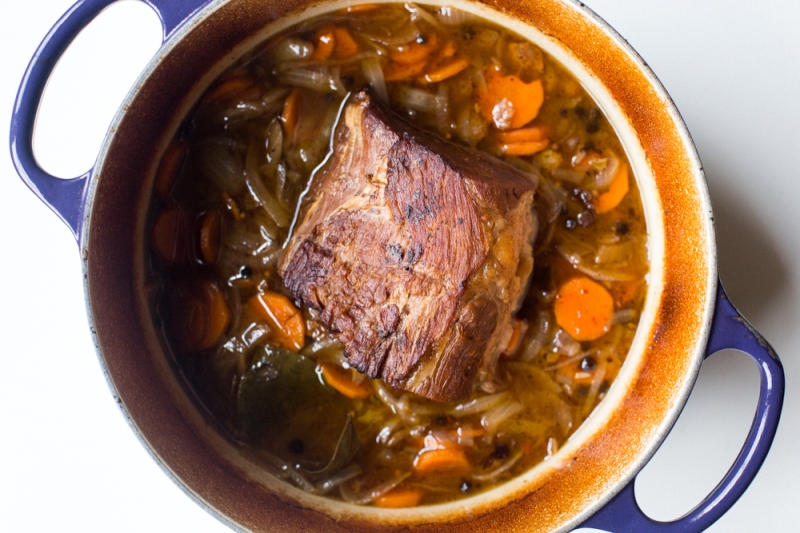 Sauerbraten after roasting, but before straining the braising liquid

The Ancestral Table and the Autoimmune Protocol