So, did you see the news? The Whole30 program now includes white potatoes. For those of you that aren’t familiar with Whole30, it is a 30-day eating program with a moderately strict interpretation of the Paleo template – no alcohol, sweeteners of any kind, or faux foods (like almond flour pancakes); in my cookbook, I reference it as “a tough-love plan to transform your diet.” It’s especially popular right around the New Year, as people look to clean up their eating habits.

Since its inception, the Whole30 has forbidden white potatoes, likely due to the fact that most potatoes are eaten in the form of chips or french fries. I have been an advocate for white potatoes since first changing my diet in 2010, after reading about the Perfect Health Diet. My inclusion of those little delicious tubers on this site has constantly confused readers who were introduced to Paleo through the Whole30 concept. So I’m happy to see that potatoes are gaining more acceptance as a whole food that has just as many nutrients as its favored cousin, the sweet potato.

White potatoes serve as an excellent example of mindful eating. They have a moderately high glycemic load, but studies have shown that it is greatly reduced when eaten with certain foods, especially fats and acids. So be sure to smother your baked potato with butter and sour cream. Also, the skin of white potatoes are high in glycoalkaloids, which can cause gastrointestinal irritation. This is a known issue – in fact, modern potatoes are much lower in glycoalkaloids than in earlier history, as farmers cultivated certain potatoes (especially the russet potato) to be more digestible.

Preparation of potatoes is also important; when compared to white bread, boiled potatoes are 323% more satisfying per calorie. Potato chips? Only 91% as satisfying. That’s why most people are able to easily eat three potatoes’ worth of potato chips, when they’d have a hard time eating three boiled potatoes in one sitting. So at our house, we typically only eat our potatoes boiled (and mashed) or baked. Or twice baked, like in today’s recipe.

I’ve recently teamed up with Whole Foods, where every few months they send me samples of new products they are carrying in their stores. The highlight of their inaugural shipment was this line-caught tuna from Pole & Line. Each can is BPA-free, and bears the signature of the fisherman that caught the fish. I used their skipjack tuna in making this recipe. Be sure to scroll down after the recipe to see some of the other items that are coming soon to Whole Foods.

1. Preheat your oven to 400F. Wash the potatoes with cold water, then rub with the oil and kosher salt. Place them in the oven, directly on the oven rack, and bake until soft, about 45 minutes. Remove from the oven and cool for 10 minutes.

2. Slice the potatoes lengthwise, then scoop out the filling with a spoon and add it to a mixing bowl. Add the remaining ingredients to the mixing bowl, then mix thoroughly. You can reserve a bit of the chopped parsley if you’d like, to add to the potatoes when they’re finished. Taste and add salt if needed.

3. Return the potato filling to each potato, creating a mound in each. You may have some extra filling left – an added bonus to enjoy while the potatoes bake. Place the potatoes on a baking sheet and return to the oven; bake for 15 minutes, then broil until crispy on the top, about 3 minutes. Serve immediately.

** I’m a huge fan of the just-released mayonnaise from Tessemae’s (I was lucky enough to taste one of their test batches, and it was super hard to keep that information to myself). But making it at home is very easy, too. Melissa Joulwan’s recipe is foolproof.

** Instead of pickles, any pickled veggie would do. I imagine pickled onions, sauerkraut, or even kimchi would make for some excellent stuffed potatoes. The key is to use something with a sharp, umami-centered taste, to contrast the relatively bland nature of potato.

** Feel free to go nuts with this template. For example: bacon. Or cheese if you’re up for it. 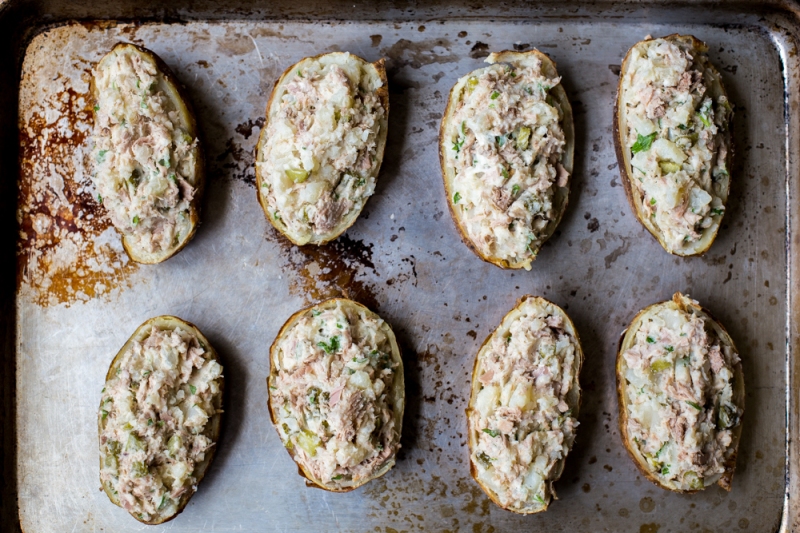 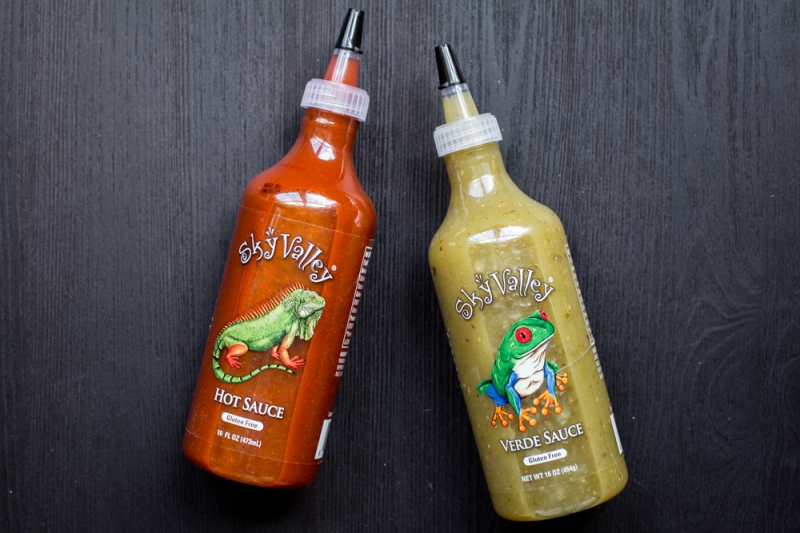 Here are some of the other items that I received from Whole Foods. These two sauces from Sky Valley were both excellent, and can serve as both condiments (I liked adding a bit of salsa verde over white rice) or as a cooking sauce; both would work well as a marinade for grilled chicken or the like. Note that both sauces contain xantham gum. 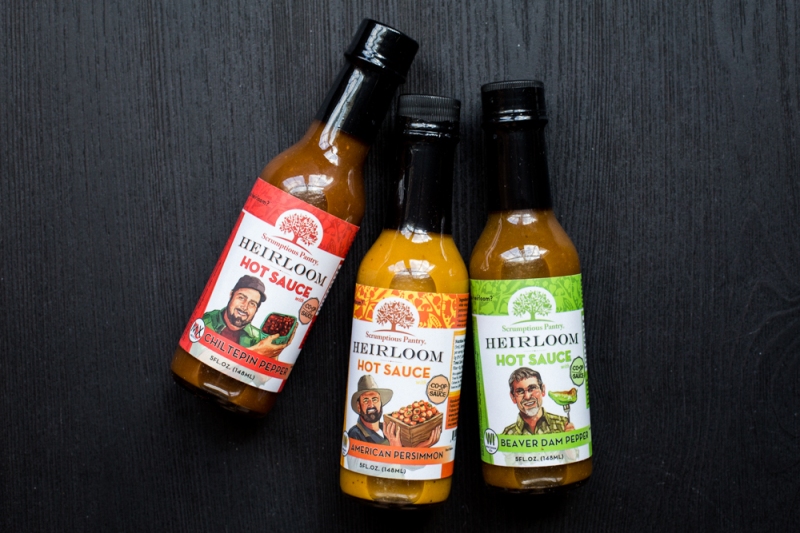 I got a kick out of these three heirloom hot sauces from Scrumptious Pantry, made with somewhat offbeat ingredients. The American Persimmon sauce is flavored with habanero peppers and orange juice for a distinct, medium-spicy flavor. The Chiltepin Pepper (aka Bird’s Eye Chili) sauce is sweetened with honey and lime juice, and is the spiciest. The Beaver Dam Pepper has some honey and a bit of cane sugar (it’s the last ingredient listed), and is the most mild of the three sauces. Overall, the sauces are less spicy than I expected; the Chiltepin is about as spicy as your standard Tabasco sauce. The American Persimmon was my favorite, but that also depended on what I was eating; the Beaver Dam Pepper sauce went best with these Tuna Stuffed Potatoes.

Another favorite was this Deck Hand cat food, made from the same folks that caught the tuna used in this recipe. The cat food contains the red meat of the tuna, since the white meat is canned for human consumption. Pretty cool that they don’t waste any of the fish.