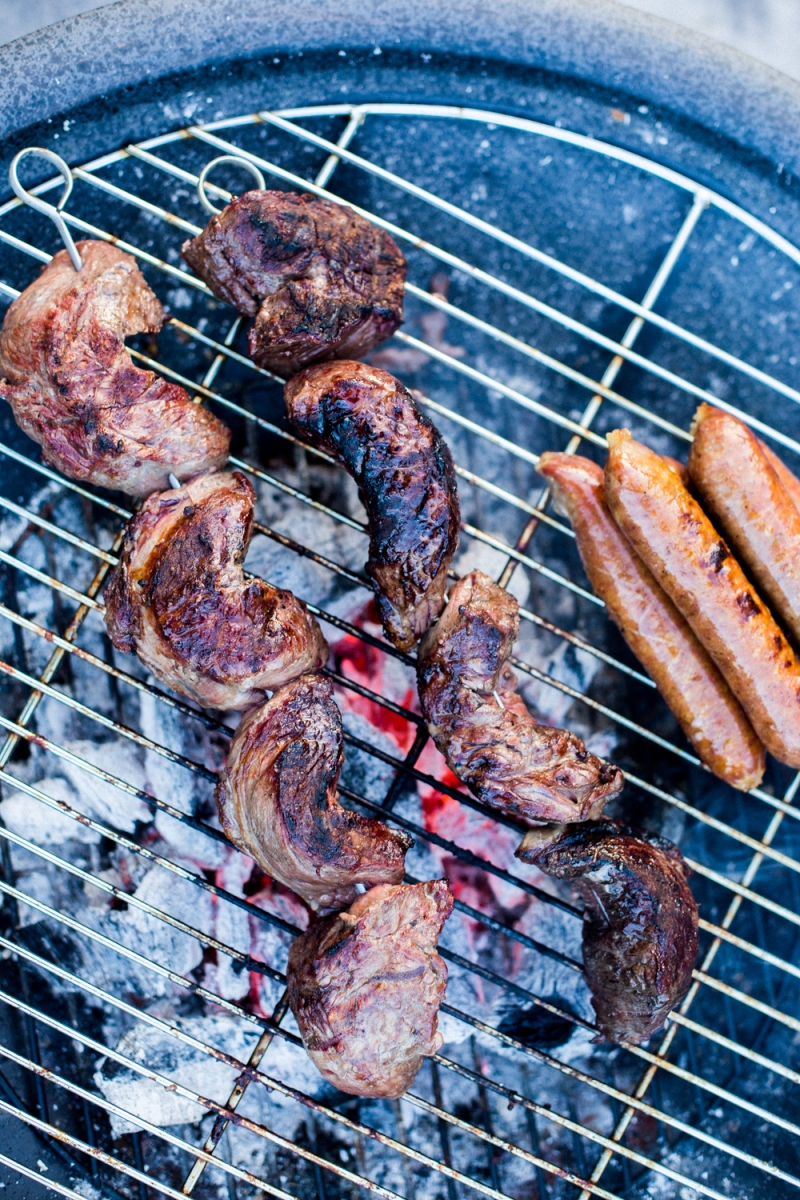 Hey folks! Tonight at 7pm ET (4pm PT) I’ll be one of three home chefs participating in a live Google+ Hangout “Cookalong” with MasterChef Top 4 contestant Jessie Lysiak; be sure to tune in via the MasterChef Google+ page or FOX’s YouTube Channel to watch me in action! Thanks for the support!

Most of the time, I really appreciate a well-marinated chunk of meat. Or something that’s been swimming in a fragrant sauce for a while. But every once in I while I like to bring dishes back to their basics – and this week’s recipe fits the bill nicely. Picanha (pronounced “Pee-cone-ya”) is about as simple as it can get: skewered rump cap roasted over an open fire, flavored with only sea salt. It’s a staple dish of Brazilian barbecue (churrasco) and one of the more prominent dishes from the region.

A rump cap is hard to find in many American butcher shops, as it’s often incorporated into the cut we call rump roast. If you’re lucky enough to find it in North America, the rump cap is usually identified by a thick layer of fat on one side which flavors the meat as it grills. As an alternative, we used a couple top sirloins from US Wellness Meats, which had a nice layer of fat on one side, mimicking the rump cap perfectly.

This week’s recipe, like last week’s Couve a Mineira, is part of a team-up recipe with my friend Alex Boake. Be sure to check out her illustrated version of this recipe!

Sausages might seem out of place with this recipe, but from what I can tell they’re an essential part of churrasco – they are used to season the grill before adding the Picanha. Since I’ll accept just about any excuse to grill sausages, I don’t have a problem with this theory at all.

When it comes to choosing salt, look for the chunkiest salt you can find. The larger the salt, the more easily you can make a salty crust on the meat without making the beef’s flavor overly salty.

Since Alex was visiting for Canada, I decided to have a little fun with this recipe so I actually grilled my Picanha over an open fire using my fire pit and a combination of firewood and hardwood charcoal. But the dish can be easily made with a plain charcoal grill or a gas grill on high heat. Either way, prep your grill and get it hot.

Let the top sirloin sit at room temperature for twenty minutes, then slice diagonally into four thick, long chunks. Try to get one big piece of fat in each of the sliced chunks, to maximize flavor. Curl the chunks and skewer with some sturdy metal skewers (although you can also simply grill them like steaks if you don’t have skewers). Season generously with the sea salt on each side.

The rest is pretty easy – once the grill is hot, place the sausages on the grill directly over the fire for a couple minutes to sear them, then move them to the edge of the grill to continue cooking. Your cook time for the sausages will depend on whether you’re using fully-cooked sausages like us, or raw sausages. Either way it should take between 10-15 mins to cook them.

Once you’ve moved the sausages to the outside of the grill, let’s have the star of the show make an appearance. Place the Picanha directly over the hot part of the fire and roast for about four minutes per side. It’ll likely flare up a bit, which is fine since we’re looking for a nice salty crust on each side of the meat. Cook to your liking (test for doneness with your finger), remove from the heat, and slice to serve.

Serve the sausages and Picanha with collard greens and cheese buns.